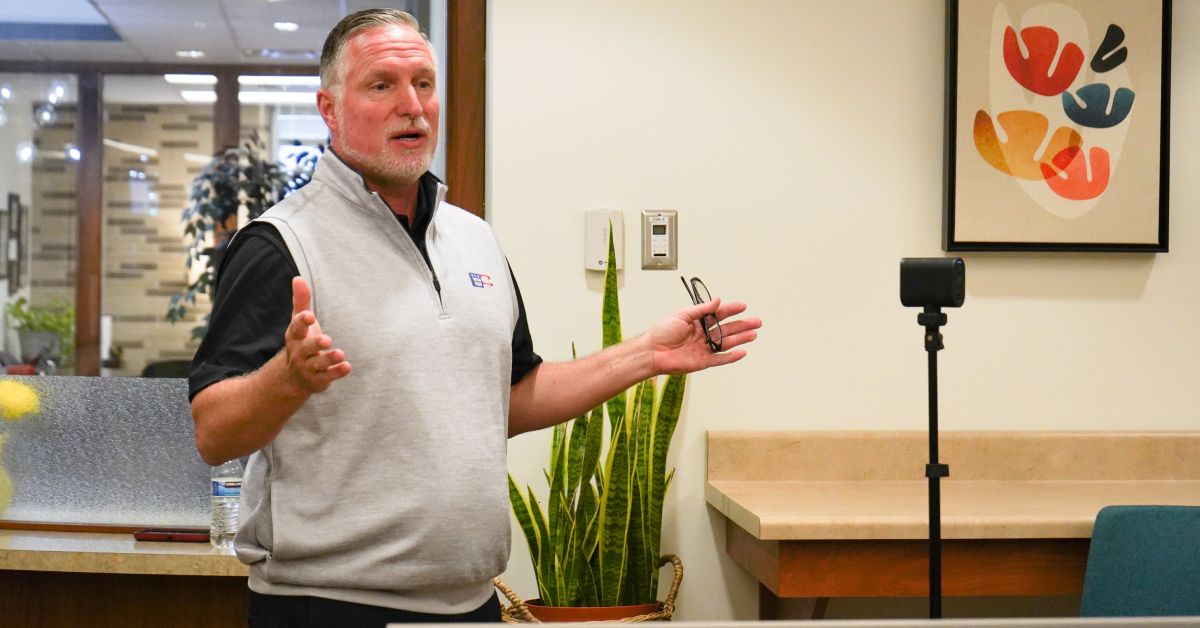 On Tuesday, May 3, Mayor David Uran hosted his monthly Tuesday Talks at CP Coworking located on the Crown Point square. Uran began hosting Tuesday Talks as a way to connect with community members in a relaxed setting.

Each month, a different venue is chosen to host the mayor and community members for the gathering. This month, CP Coworking was the venue of choice. CP Coworking offers a rentable office space with secure high-speed internet, access to a conference room and printer, and more. The space was a fitting venue to host a conversational-style evening.

The topics for May’s meeting included Uran’s recent announcement of taking a new position with the South Shore CVA, expansion of the Erie Lackawana bike trail, and updates from Library Director Julie Wendorf.

Uran began the meeting by announcing his decision to accept a job as President and CEO of the South Shore CVA. Though he was happy with his position as mayor of Crown Point, he feels this new position will allow him to extend his passion for the city throughout the rest of the Region.

“If you think what we’ve done here has been really great for Crown Point, just imagine what we can do for the Region. That’s what really excited me. I was very happy with where I was at, but now I have the chance to do this regionally and help other municipalities be just as successful as Crown Point has been in the past,” said Uran.

Uran then explained the process of selecting his replacement for the last 18 months of his term. As of May 3, there will be a 30-day caucus before the democratic global precinct organization will select a replacement. June 2 will be Uran’s last day in office, and on the evening of June 2, the committee will make a decision on the replacement.

For over 14 years, Uran has held the mayoral position in Crown Point. He feels honored to have been able to serve the people of Crown Point and plans to leave the city better than it was when he started.

“It's been my honor and pleasure to work with you guys for the last 14 plus years,” said Uran. “I've never considered it work because the interaction was such a very great opportunity to get to know you better and along the way help solidify your investments here in Crown Point and make it a quality place to live. You guys have helped me grow personally and professionally. I've been loved.”

Uran also discussed some of the upcoming improvements to the city’s bike trails and roads. A plan is in place to connect the Erie Lackawanna trail to a 3,700-mile stretch of trails connecting the United States from coast to coast. Construction is expected to begin in 2023.

A reconfiguration of the intersection at Delaware St. and Rt. 231 is underway, and plans include aligning both sides of Delaware St., widening the road, and adding turn lanes to improve traffic coming off of I-65. The city will begin investing with capital improvements but hopes to earn a portion of that investment back from the state.

There will be about $3 million dollars spent on road improvements in 2022.

“When I first got into office in 2008, we were doing about 2.5 miles of roads per year. Now we're getting over 10 to 11 miles of road, which is very important because with 150 miles of roads that last for 15 years, we need to be at that 10 mark. I'm very proud to say that we're right there at that target that we promised to deliver,” said Uran.

After a few more updates about upcoming events for the city, Uran welcomed Special Events Coordinator Diana Bosse to discuss more of the city’s plans for entertainment and activities throughout the summer.

Bosse briefly discussed the schedule of summer events full of both old traditions and new festivities. These events include the weekly farmers market, car cruises, an MMA fight, live music, and movies in the park. For more information on summer events at Bulldog Park, click here.

Following updates from Bosse, attendees heard about upcoming library renovation plans from Library Director Julie Wendorf. Wendorf announced plans to repaint the walls of the library and reduce the number of paint colors in the building from 16 to a more manageable and appealing number. The new library has been open for 10 years this year, and Wendorf is excited to be able to make the library look brand new again.

Wendorf also announced the launch of the Crown Point library’s involvement with the Indiana Digital Library. The new agreement has expanded the library’s stock of e-books to be 15 times larger than it was before the partnership.

“This is a consortium of Indiana libraries. There are about 200 of them that have joined together to provide better reading materials for our patrons throughout the state. Our library had about 8,000 materials before we joined this consortium. Now we have 131,000 e-books, 35,000 e-audios, and 3,000 magazines to access. That's 15 times the materials that we used to have available for our patrons,” said Wendorf.

To close out the night, Mary Freda gave a brief rundown of the list of events occurring during the week of May 3. After Freda’s announcement, Uran opened the floor one final time for questions. More questions arose about Uran’s new position with the South Shore CVA, to which he further explained his new role and his pride of the work he has accomplished over the past 14 years in Crown Point.

“I'm still here as a resident and I want to see Crown Point continue to be successful and move forward as much as you guys do. We're invested. When I first walked into office on January 1 of 2008, I said ‘I come from a family of six,’ and at that time we came to a family of 27,000. Our family just got a little bit bigger in the 14 years. Now we're just slightly over 34,000,” said Uran.

Though he will be leaving office earlier than expected, Uran is looking forward to the future of Crown Point and the Region as a whole. May’s Tuesday Talk was full of insightful conversation, and attendees concluded the night by thanking Uran for his many years of service for the city.

For more information about the city of Crown Point, visit crownpoint.in.gov