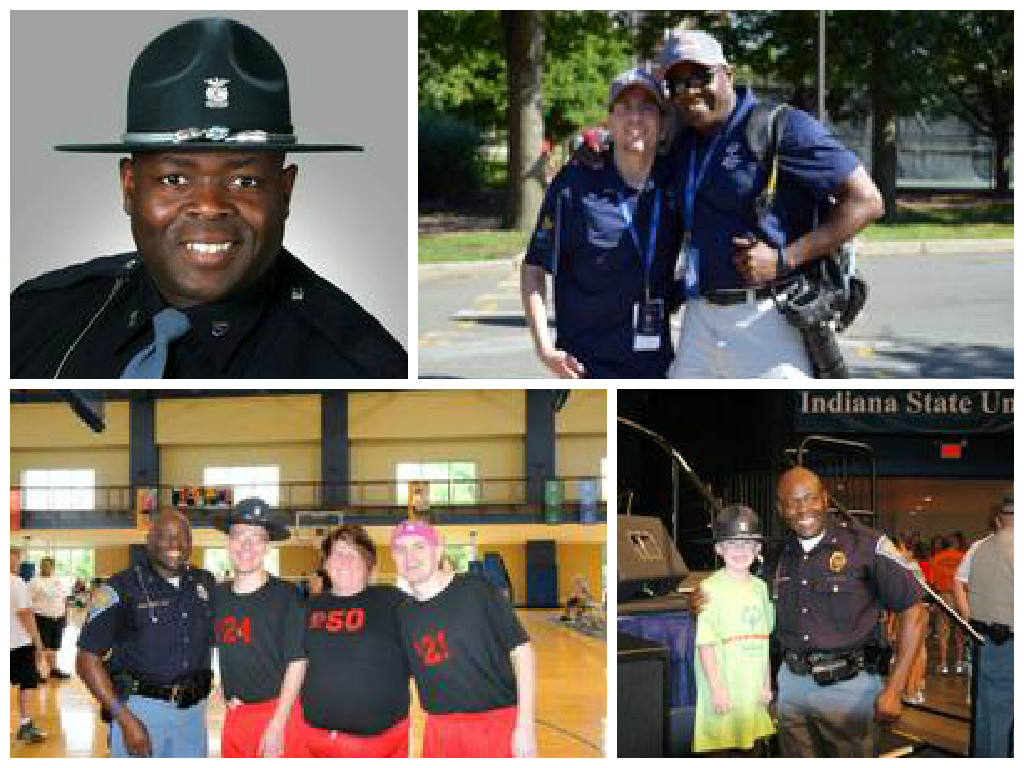 Tommy’s experience with Special Olympics Indiana (SOI) started in 1994 when a fellow police officer invited Tommy to join in a run in 1994. Tommy never stopped running, figuratively or literally, and has maintained involvement with SOI and was most recently named the State Director of the Indiana Law Enforcement Torch Run (LETR) Leadership Team in 2014.

When asked about becoming involved with SOI in 1994, Tommy said, “[After the run] We greeted over 4,000 Special Olympics Indiana athletes as they entered Opening Ceremonies that evening, and I have not looked back since. Being committed to Special Olympics athletes has brought purpose to my life!”

Tommy went beyond just running in 1994 and also started a weightlifting fundraiser called ‘Showdown of the Shields’, in Columbus, IN. This year’s event will be the 21st anniversary of the event that averages $5,000 annually for the athletes of Special Olympics Indiana.

Stephanie Manner, Manager of Community Partnerships, said “Tommy has been a wonderful ambassador for Special Olympics Indiana and the Indiana LETR over the past twenty years in a variety of other ways.” Mrs. Manner shared that in 2012, Tommy played a large role in the planning committee for the International LETR Conference in Indiana, hosting over 900 law enforcement officers, Special Olympics athletes and staff.

In 2014, Tommy became the first law enforcement officer to ever become a member of Team Indiana traveling to the 2014 Special Olympics USA Games as the team’s equipment manager. He has been selected to represent Indiana LETR in multiple national and international Torch Run Final Legs, leading to Special Olympics National and World Games. Of course, Tommy has also participated in various fundraisers like Tip-A-Cop and Plane Pull over the last twenty plus years. Tommy also has taken the initiative to build the relationship with the entire Indiana State Police force, working with various officers and the Superintendent himself. This has already resulted in an additional over $42,000 for Special Olympics Indiana.

In what little spare time he has between protecting the people of Indiana, serving as the Indiana LETR State Director and volunteering for Special Olympics and other community efforts, Tommy is a photographer. With this talent, Tommy has donated his time to photograph countless Special Olympics Indiana events, capturing thousands of priceless images of competition, fundraising and the Spirit of Special Olympics itself! Tommy even spent his time, beyond his volunteer equipment manager responsibilities with the Indiana USA Games Team, taking photos so that the athletes could treasure the memory of their once in a lifetime experience and Special Olympics Indiana would have an archive of the wonderful journey of Team Indiana.

Tommy has shared before, “Some ask: Why are you committed to Special Olympics? I answer: Because of its athletes…they portray a life lesson…Be the best ‘you’ that you can be… ‘Be Yourself!!!’ They are fun, bold, courageous and exciting!”

As enthusiastically stated by Stephanie Manner, “Tommy received this award because he fully exemplifies the Spirit of Special Olympics Indiana and the LETR community!”