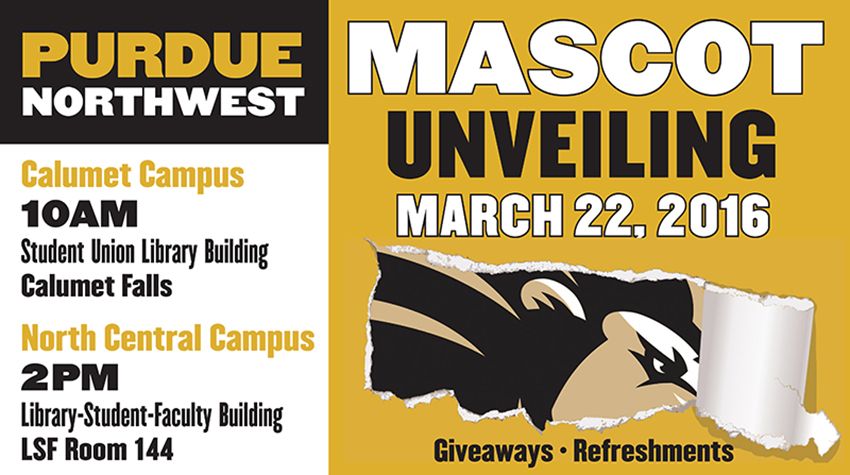 The official unveiling of mascot logos for the Purdue Northwest Pride — represented by the bold image of a lion — will take place on Tuesday, March 22, with events celebrating the new marks scheduled on both campuses.

10 a.m. & 2 p.m. campus events
Purdue Calumet’s Hammond campus will host an unveiling in Calumet Falls on the concourse level of the Student Union and Library (SUL) at 10 a.m.

Purdue North Central will have an unveiling on the Westville campus at 2 p.m. inside the Library-Student-Faculty Building (LSF) Room 144.

All students, faculty and staff members of each campus are invited to attend the events, as well as community members, alumni and media. Each unveiling will feature remarks by PNW Chancellor-Designate Thomas Keon and Purdue North Central Chancellor James Dworkin. Student-athletes from each campus, PNW Athletic Director-Designate Rick Costello and PNW Associate Athletic Director for Compliance-Designate Tom Albano also will provide comments.

Once the mascot is unveiled, attendees will have access to giveaways that feature the new logo, including t-shirts, mini-basketballs and pennants. Refreshments also will be served at both campus events.

Thousands participated in process
Through an extensive process that began in February, 2015, thousands of students, faculty, staff, alumni and community members from the Calumet and North Central campuses participated in the nickname selection. A task force comprised largely of students guided the process, which included a widely distributed survey to which nearly 3,000 people responded.

The lion mascot emerged through extensive brand research that included discussions and focus groups with hundreds of students, faculty, staff and alumni.

Pending Higher Learning Commission approval, the unification of Purdue North Central and Purdue Calumet into Purdue University Northwest will result in an institution of some 15,000 students, fifth largest in Indiana.