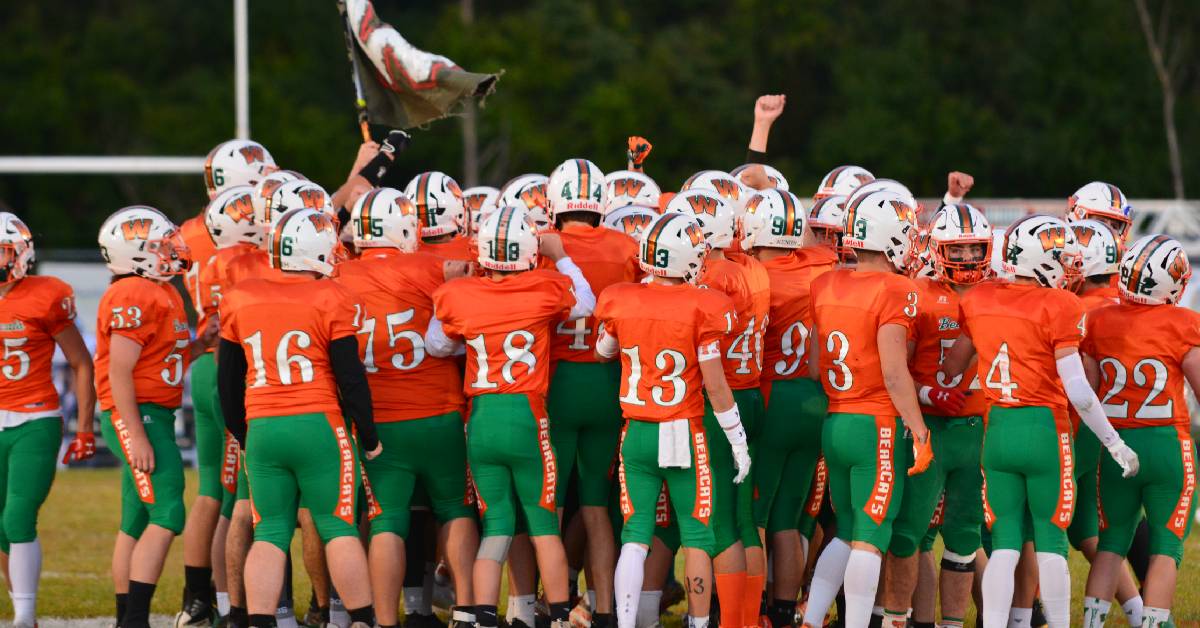 It may not be clear how it began, or when it began, but every season there is a whole new level of excitement in the air when the Wheeler Bearcats take on the Boone Grove Wolves.

“I think it’s been a rivalry since the beginning of time,” said Mark Holder.

He has been playing for Boone Grove schools since he was in the 8th grade. As the quarterback, safety, and kicker for the Wolves, Holder was looking forward to taking the field.

“I think this is going to be a good match up,” he said. “They have a pretty good running back so we will see how we contain him.”

“No one ever tells you why. You just come to the school and they tell you that you are rivals,” said Wheeler sophomore Jalen Lewis. He was looking for a Bearcat win. “This is going to be a big game.”

“It’s been that way since I went here in ‘95,” said Wiggins.  “Even in basketball, it was that way.” Wiggins was expecting to crush the Bearcat rival.

April Torbeson  was not sure herself how the rivalry started. She just knew her son Tyler, a freshman for the Wolves, was pumped for the game.

“I’m assuming it is because they are so close in size and proximity,” speculated Torbeson. “Tyler played pop warner with a couple of the kids from Wheeler.”

Located just 6.7 miles from each other, the rivals are known to have students and athletes go from one school to another. Before there was a Wheeler youth football program, many of the kids from both schools played together in Boone Grove Pop Warner. The Bearcats’ quarterback, Preston Morris, played for the Wolves the year prior.

“A lot of these kids know Preston. They know what he is about. We know we gotta shut him down, “ said Wolves’ Head Coach Dan Kukulski. He has been with the Boone Grove football program since 2009. This is his fourth year as the head football coach. Having 15 seniors graduate last year, Coach Kukulski was remaining positive for his young team.

“This year is a rebuilding year for us,” said Joshua Russell, Athletic Director at Boone Grove. “We graduated 15 seniors last year and lost a couple of guys who transferred, but we have an incredible amount of young talent that Coach Kukulski is doing a great job developing.”

“This is a good group of kids. They are coming together,” said Kukulski. “Every team has peaks and valleys. For the last three years we were peaking. They {Bearcats} are peaking right now and we are in a valley. If we have to move over we will, but we are going to give them a fight.”

For Coach Kukulski there was a moment that stood out for him when it came to the Bearcats versus Wolves history.

“Several years ago we played them in a sectional game and we won 7-6,” said Coach Kukulski.

“Boone Grove is a big game for us. It’s our rivalry week. Kids are excited to play tonight,” said the Bearcats’ Head Coach, Adam Hudak. He too felt it was the close location and prior time spent together in pop warner, that made these once friends, now rivals. He was happy to be on home turf for the second week in a row, after four weeks away,  even if it was a chilly night.

Despite the rivalry it has always been clear that the two schools have respect for each other.

“The Boone Grove administration does a great job with their kids and their coaches do a great job, “ said Randy Stelter, Wheeler Athletic Director. “We love playing them because our kids are friends with their kids.”

“While we are intense rivals on the field, our schools have always come together for each other,” said Russell. “We really appreciate the Wheeler community, and wish them nothing but the best throughout the rest of the season!”

Mya and Mia DeJesus, sophomores at Wheeler, were excited for the game. Wearing camouflage in the student section, both were convinced the Bearcats were going to come away with a win.

Senior Bearcat cheerleader, Lily Bushey,  was pumped for the rival teams to play. Reflecting on her cheerleading career, Bushey was hoping for special memories to be made tonight. She would not be disappointed as the Bearcats took the lead early on with a 40 yard field goal. From there on the Bearcats controlled the score board leading 23-0 at the half and winning the game 44-0. Despite their loss the Wolves did not back down pressuring the Bearcats the entire way showing the Bearcats a new challenge would be awaiting them next year.

Next week the Bearcats take on the Osceola Grace Eagles while the Wolves will take on Hanover Central.