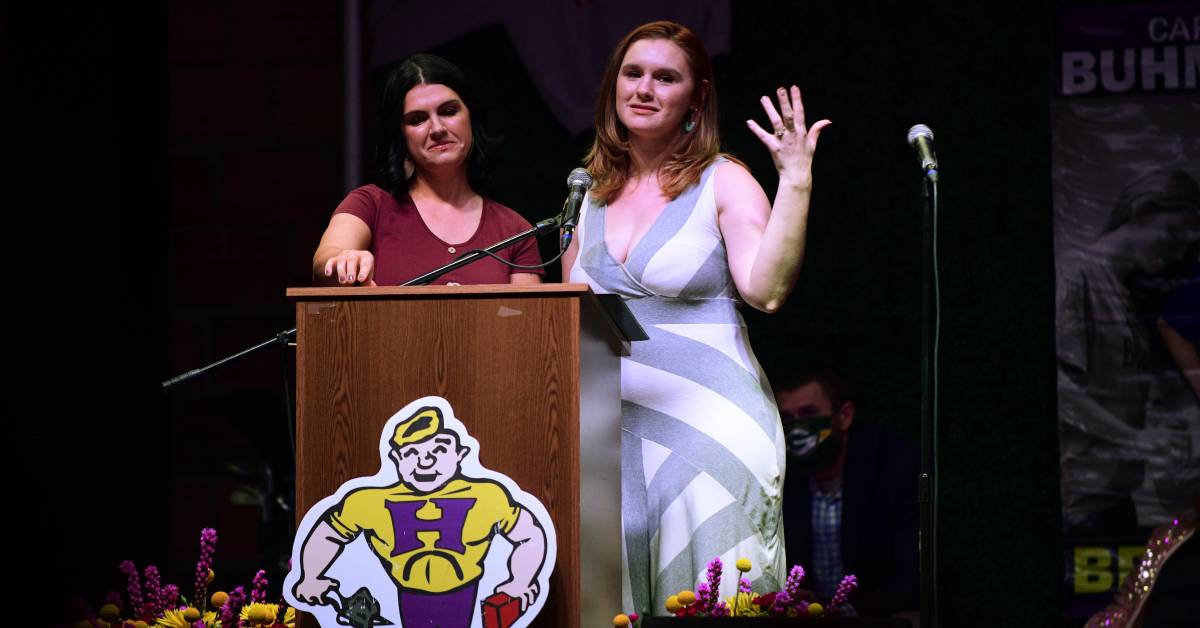 While motherhood is defined as being the state of raising a child, it can also be considered to be the quality or characteristic of a mother. The play, Listen to Your Mother, proves that there's no one way to be a mother.

“Listen to Your Mother is a show of local people—and you don’t have to be a mother—telling their stories about motherhood,” said speaker Jaime El-Talabani. “It can be about how a mother touched your life, what mothering has meant to them, what it’s like to be a stepmother, or even a pet mother. Any story on the spectrum like that.”

El-Talabani had watched the show as an audience member many years before joining the cast herself. She was joined by her sister Kelly McGuire. The two took the audience on a journey from their childhood sibling rivalry to present day where they live down the street from each other, raising their children together.

Carrie Bedwell, a cast member in 2014, has directed and produced Listen to Your Mother for the last four of the ten years the show has been held in Northwest Indiana. In her piece, “Fur Real,” Bedwell debunks the stigma that dog or cat owners cannot be pet parents.

Every piece of the production was unique in its representation of motherhood. Mary Lu Cowley made the audience laugh and smile with her presentation regarding her mother-in-law.

“My mother-in-law and I had a growing relationship over the years,” said Cowley of her mother-in-law, who passed away in 2019. “By her being the person she was, we were able to have a wonderful relationship. I was not her first choice but she grew to love me. Who wouldn’t?”

Marc Chase brought the audience to tears with his piece, “Dear Birth Mom,” which was dedicated to the birth mother of his two adopted children.

“I am grateful for the trust you gave us,” said Chase to the now deceased birth mother. He promised the adoption of his children would always be openly celebrated, allowing them to know the sacrifice their birth mom made.

In her piece titled “One Twenty Eight”, Carri Ables reflected on the mother figure her grandmother was to her over the years. Ables, whose grandmother was born on January 28, 1921, took the audience on an account from childhood memories of her grandmother to the poignant moment when Ables anxiously prepared for the birth of her son.

Speaking to her deceased grandmother for support while awaiting the birth, Ables said “Give me a sign you are here.” Her son was born at 1:28, mirroring her grandmother’s birth date.

Valentine Torres spoke of  the importance of the mom community.

“It is a village of mothers who give the care and love that all children deserve,” said Torres.

Being a “mom raised by moms”, Torres assumed that if a woman was strong and independent, she must be a mother.

Stephanie Trendowski reflected on her journey as a new mom nearly dying from preeclampsia to how she became an advocate for new moms, traveling to the capital to speak.

“Your story matters, you matter,” said Trendowski to the mothers in attendance.

The yearly event took place with a part of the proceeds going to the Hobart Brickies program and was held at the Hobart Art Theater. To learn more about the upcoming events visit the theater website at https://brickartlive.com/