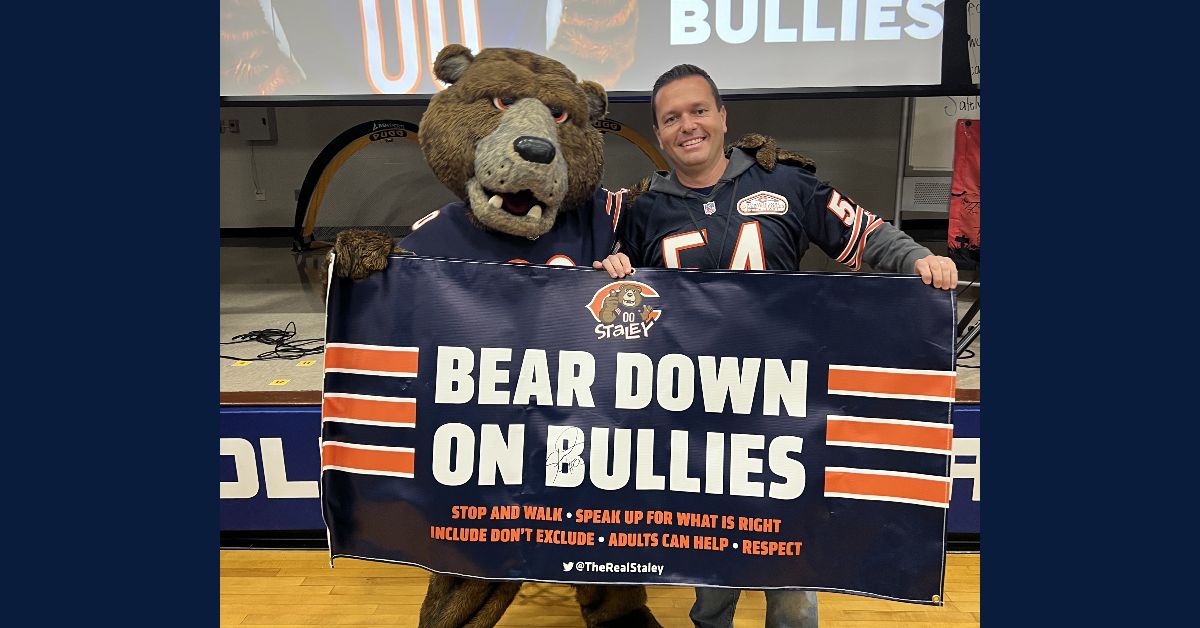 October is Bully Prevention Month! Lincoln Elementary in Cedar Lake, IN was visited by Staley Da Bear, the official mascot for the Chicago Bears. Staley was thrilled to see so many of the students and staff in their Chicago Bears swag. In the assembly, students were taught how to “Bear Down on Bullies” inside and outside of school. The students also learned about the different types of bullies. Staley handed out prizes for answering trivia questions about both bullying and the Chicago Bears.

Staley has some experience being bullied. A little white rabbit, named Fluffy, has been teasing Staley for his hairy back and his big, stinky bear feet. Staley had to do a thorough sweep on the Lincoln gym to make sure that Fluffy wasn’t around. He took the time to give us advice as to how he combats bullying.

There are 5 ways to combat bullying, according to Staley Da Bear. The first way is, “Stop and walk,” where he demonstrated walking away from bullies, with the optional hair flip to add a dramatic flare.The next option is, “Stick up for what’s right,” which he gave examples of what to say to bullies to get them to stop. The third way is, “Include, don’t exclude,” where Staley invited someone that was getting bullied to join him and his friends at recess, to get him away from the bully. Another choice is “Adults can help,” where Staley asked the students for examples of different adults that can help, like parents, teachers, and principals.The final way is, “Respect,” which is simple, treat others the way you want to be treated.

Staley taught the students what types of bullies there are and how to combat them. Staley also gifted the school a banner to remind us to “Bear Down on Bullies.” Staley did his signature butt bounce down the aisle of students. He also DJed, where he and all the students and staff did the Cha-Cha Slide. Students got to high-five, hug, and talk to Staley. Teachers and students had the opportunity to take pictures with Staley Da Bear. Lincoln Elementary will have that banner to remember the great experience they had with Staley