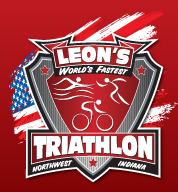 Following a motorcade by the Indiana Patriot Guard, WIRED Athletes, as well as numerous other military and veteran organizations and individuals, will participate in the Leon’s Triathlon opening ceremonies.

Leon Wolek, founder of Leon’s Triathlon, has dedicated the opening ceremonies of the event to the military and veterans to show appreciation for their service to our country. The Garrison flag will be presented along with a 21-gun salute beginning at 7:30 a.m. on Sunday, June 1.

Jim Cornelison, Chicago Blackhawks’ national anthem singer, will perform “The Star-Spangled Banner” during the ceremony, and a tribute song will be performed by Hobart High School’s Wolffgang Choir.

“We’d like to invite everyone to come participate in the opening ceremonies so they may show their gratitude to our veterans, even if they are unable to stay to watch the triathlon,” stated Wolek.

Leon’s Triathlon, an Olympic-distance race beginning and ending at Wolf Lake Memorial Park, includes a .9-mile swim, a 24.6-mile biking portion and a 6.2-mile running portion. The event will be nationally broadcasted on Comcast SportsNet during Fourth of July weekend, allowing millions of households across the nation to watch as participants swim, bike and run their way through Northwest Indiana.

Kicking off the race weekend, Leon’s Triathlon will host a Demo Day from 10:00 a.m. to 5:00 p.m. on Saturday, May 31. The event will showcase the latest technology in triathlon gear. Attendees will be able to try on running shoes and wet suits as well as test ride bicycles. The event will also host an equipment drive supporting Tri-Masters, a not-for-profit organization that empowers at-risk children through triathlons in order to teach life lessons. Demo Day is free to attend and open to the public.