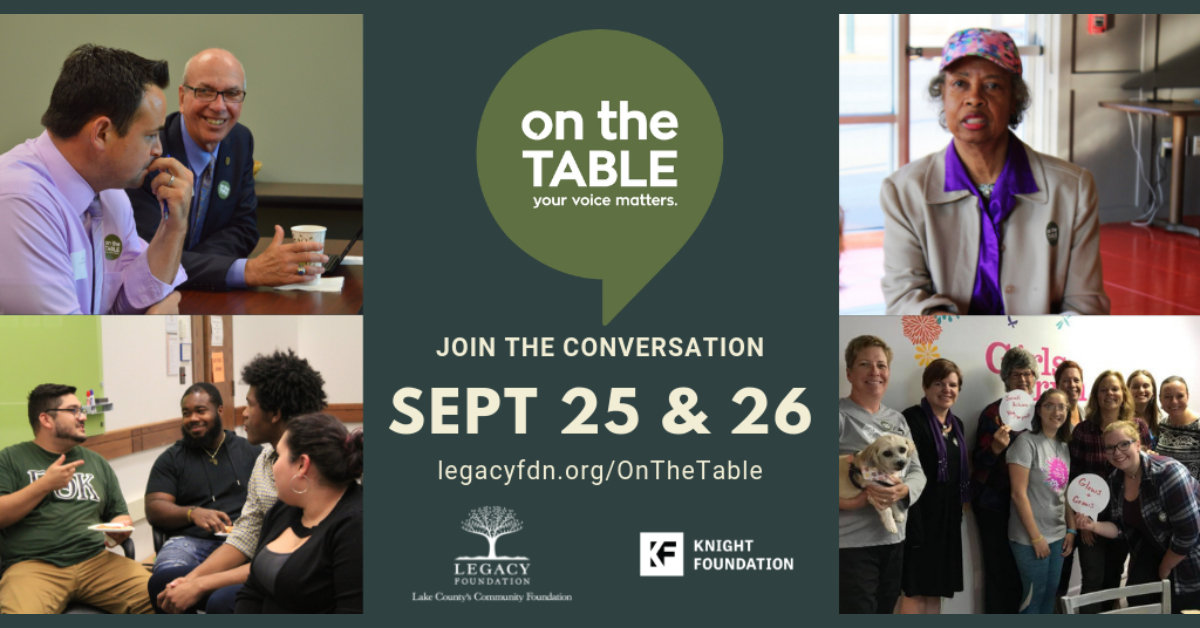 How often do you find yourself at the dinner table with friends, talking about your local community, and someone hits on a really good idea?

On September 25 and 26, that someone could be you, thanks to the On the Table community discussion program sponsored by Legacy Foundation Inc. and the John S. and James L. Knight Foundation.

“This year, we’re doing it over two days instead of just one,” said Legacy Foundation Director of Marketing & Communications Erica Fizer. “And we’ll be working with community foundations throughout Northwest Indiana to put together a proposal for a regional plan.”

Hosts will have the option of choosing to hold events on either September 25 or September 26. Dinners don’t have to be large events, Fizer explained. They can be smaller, more intimate gatherings, as long as there are at least six participants.

Even though Legacy Foundation has traditionally focused their area primarily on Lake County, they have expanded the 2019 program across all of Northwest Indiana.

Organizing an On the Table discussion is very easy and open to anyone who is interested— all a potential host has to do is sign up through the event website. Legacy Foundation provides all the necessary materials, like conversation prompt cards, to make the gathering a success.

“Something that’s different this year is that we’re asking hosts to organize their conversations around one or more of the six priority issues that have been identified from data collected over the past two years’ events,” Fizer explained.

Those six conversation focuses are:

The scope of the discussions and resulting action goals have expanded significantly since Legacy Foundation started the program two years ago.

“Initially in 2017, we were looking for a way to get residents talking face to face and encourage more in-person conversations between neighbors and coworkers around the topic of community,” Fizer said.

The following year, in 2018, Legacy Foundation started using data from the conversations to help structure their funding goals. This year, the organization plans to expand the application of collected data to projects across the Region.

“We use the feedback from these conversations to help guide our grantmaking,” Fizer said.

Based on the results of On the Table discussions each year, Legacy Foundation selects 10 local groups to honor with a Community Action Award. Selected winners receive grants of $1,000 to use towards projects that highlight needs identified through the September event.

“We will be doing Community Action Awards again,” Fizer said. “It’s not just open to nonprofit organizations, like our normal grant cycle. Individuals, businesses, and churches can apply for a community action award. They do have to participate in On the Table to be eligible.”

To sign up to host a conversation, for more information about the On the Table program, and to see the data collected from 2018, visit Legacy Foundation’s On the Table website at http://www.legacyfdn.org/onthetable/.