Sandra Alwin is 75-years-old and is a recent graduate from Munster Med-Inn and Ronald Shorter is still undergoing therapy work with the facility to learn how to walk again.

About two years ago, Alwin fell and broke her back. Her rehabilitation was at Munster Med-Inn, where she was working with therapists on her recovery. She was using a walker, had a brace, and could only distance a few steps, she said.

“Within a short time I had no pain and could walk with no pain,” she said. “And, I have had no pain since then.”

She was doing well, until a recent fall sent her back to needing therapy, but she knew just where to go.

For the last six weeks, Alwin has lived at Munster Med-Inn, receiving physical and occupational therapy on her hip and leg twice a day.

“I went there and I had a very nice room,” she said. “They were very kind to me. They brought me breakfast, lunch and dinner, and even brought me a snack at dinner time.”

Post fall, she was bedridden for several days, and could not move her feet or legs, but after just a few appointments, Alwin was up and moving, just using the walker for balance when needed.

“I went to their physical and occupational therapy in the morning everyday,” she said. “Within three or four weeks, I was able to finally walk, walk up a few stairs, and be able to leave.” 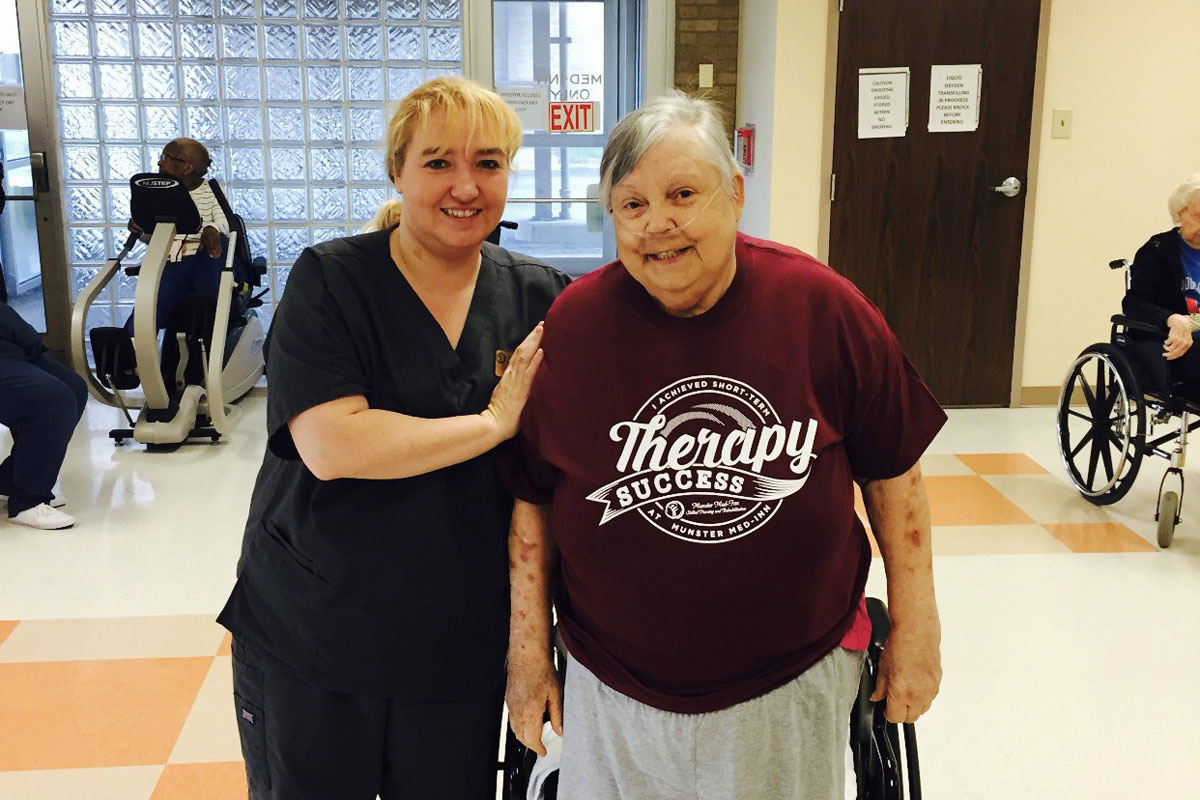 Alwin graduated from the facility last Friday, receiving a tote bag, a water bottle, and a picture.

Though she has still has a walker with her, Alwin is walking and enjoying life. She lives in a supported home neighborhood in Lansing, Ill.

“Munster Med-Inn allowed me to be able to walk again,” she said. “They really work hard to get you to do what you need to do, and the staff are very friendly. It is a very nice facility.”

Shorter just began his therapy after undergoing intensive foot surgery and is already up and walking with a walker. Shorter’s surgery included foot reconstruction, which would require extensive rehabilitation, so he chose Munster Med-Inn for therapy.

He arrived at the facility about nine days ago and was receiving therapy everyday from a physical and occupational therapist while living at the facility.

A few days ago, he decided to move back to his house, which is also in Munster and now receives his therapy from the two nurses who come to the house a couple times a week.

“Their rehabilitation is excellent, that’s why I am able to move around as I am now,” he said. “They did an excellent job, they are really helping me out.”

Shorter is still learning how to walk again and uses a walker for the few steps he can muster, but with exercises to help him move his upper body, he said he has greatly improved and is feeling much better.

“The staff are very good and very helpful,” he said.