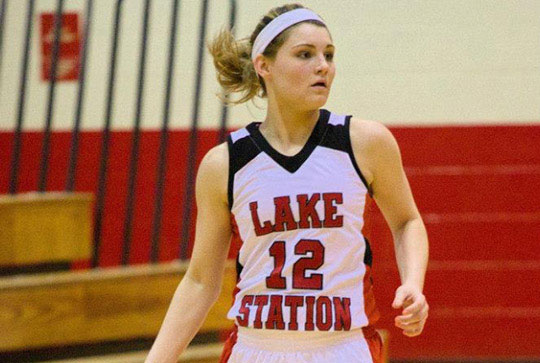 Lake Station Edison senior guard Joanna Dwyer has agreed to continue her education and basketball career at IU Northwest beginning in the Fall of 2014. Dwyer a 5'6" guard led the Eagles to a resurgent season in 2013-14 and 11-10 record en route to earning All-Area Honorable Mention honors in both the Post-Tribune and Northwest Indiana Times as well as First-Team Greater South Shore All-Conference honors.

Despite being the focal point for opposing defenses Dwyer topped Lake Station in scoring for the second consecutive season while the Eagles 11 wins this season (11-10) were the most by Lake Station in more than 10 years and equaling the total number of wins by the program from 2000-2009. The Eagles also posted a winning confernece record in the Greater South Shore Conference at 5-3. Dwyer averaged 14.4 points 3.1 assists, 3.7 rebounds and 1.7 steals during her senior season while Lake Station Head Coach, Kristy Hite-Balboa praised Dwyer for her leadership and talent as a key factor in Lake Station's turnaround season.

As a senior Dwyer went for 31 points to go along with 9 rebounds, 7 steals and 4 assists in a 76-22 drubbing of Westville in a season opening victory on Nov. 15. Later on Feb. 4, Dwyer tallied 25 points in a 50-40 conference win a marquee matchup with Whiting and the Oilers' dynamic backcourt. Dwyer scored 26 of the Eagles' 42 points in a 42-29 win over Marquette Catholic on February 17.

"Joanna was one of the top scorers and players in the area over the past three seasons due in large part to her athleticism, speed and basketball acumen. She's a great leader on the floor and fierce competitor. We were looking to bring another explosive scorer to our backcourt and roster and Joanna fits that need for us. We expect to Joanna to make an immediate impact," said IU Northwest Head Coach Ryan Shelton.

Dwyer a multi-sport star for Lake Station has racked up 11 varsity letters in basketball, volleyball, softball, tennis and track and field and was selected and recently participated in the 2014 McLegends All-Star Game. As a sophomore, Dwyer carried the eagles on her back with 32 points of her team's 48 points in a thrilling, two-point, overtime win over Hammond Clark. "Coach Hite-Balboa did a great job with Joanna and for turning the program around with the success they have had this past season," added Shelton. Hite-Balboa had the following to say about Dwyer, "Joanna has the ability to make small things turn into big results."