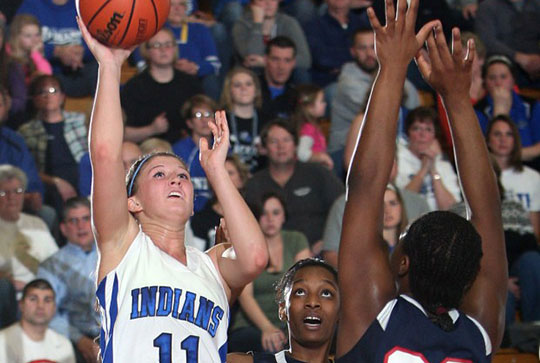 Lake Central standout Tara Zlotkowski has committed to continue her education and basketball career at Indiana University Northwest beginning in the fall of 2015. The 5'6" senior guard from Crown Point averaged 12.8 points , 3.1 rebounds, 2.3 steals and 2.0 assists per game during the 2013-14 season leading the Indians to a 19-3 record. Her outstanding play and the team's success led her to be named a 2014 Times First-Team All-Area selection, First-Team All-Duneland Athletic Conference and an Indiana Basketball Coaches Association/Subway 2014 Underclassman All-State Honorable Mention selection.

Zlotkowski an outstanding athlete, terrific in transition and the open floor also buried 39 of her 91 three-point attempts this past season for the Indians for a gaudy .429 percent from beyond the arc. She was also on target at the line last season for the Indians converting 40 of 51 free throws and leading the team in free throw percentage at .784 percent. This past summer Zlotkowski was invited to play in the 2014 Indiana Class Basketball All-Star Classic played at Anderson University in June and was lated selected to participate in the Indiana Top 100 Showcase at Ben Davis High School in Indianapolis, IN. She is currently ranked on several recruiting lists as one of Indiana's top-100 girls basketball players. Zlotkowski's 21 points in a narrow 61-57 loss to Duneland Conference rival La Porte on Jan. 11, 2014 matched a career-high.

As a sophomore Zlotkowski was a key contributor for the Indians as they posted a 16-8 record and claimed the Munster 4A Sectional Championship in 2013. She's earned a reputation as a great competitor who is able to impact the game on both ends of the floor earning high grades from top Indiana High School basketball coaches including Lake Central Head Coach Marc Urban. “She (Zlotkowski) is a fearless kid that loves challenges and loves to compete. She shoots the ball really well when her feet are set and she is quick enough to get by people which makes her really hard to guard."

Zlotkowski is the second commitment for the RedHawks in their 2015 class joining Lake Central backcourt mate guard Gina Rubino who committed to IU Northwest just last week. "We're very excited to know that Tara felt IU Northwest and our basketball program is the best place for her to continue her education and collegiate basketball career. She's an outstanding player and teammate and game changer on both ends of the floor. The opportunity to add two of Indiana's top senior guards in Tara (Zlotkowski) and Gina (Rubino) who compliment and play extremely well together puts our program in great position for many years to come," said IU Northwest Head Coach Ryan Shelton.

IU Northwest is coming off a program best 23-9 overall record (14-1 at home) that included the A.I.I. Regular Season Championship and run to the A.I.I. title game. The RedHawks return 2014 A.I.I. All-Conference performers in Nicki Monahan (A.I.I. First Team, Freshman of the Year) and Danielle Zandstra (A.I.I. Second Team, Defensive Player of the Year). They'll be joined by a recruiting class led by 2014 IBCA All-State Honorable Mention performer Grayce Roach (Hobart). Also an outstanding student, Tara intends to major in Criminal Justice and will begin her collegiate basketball career at IU Northwest in the Fall of 2015.