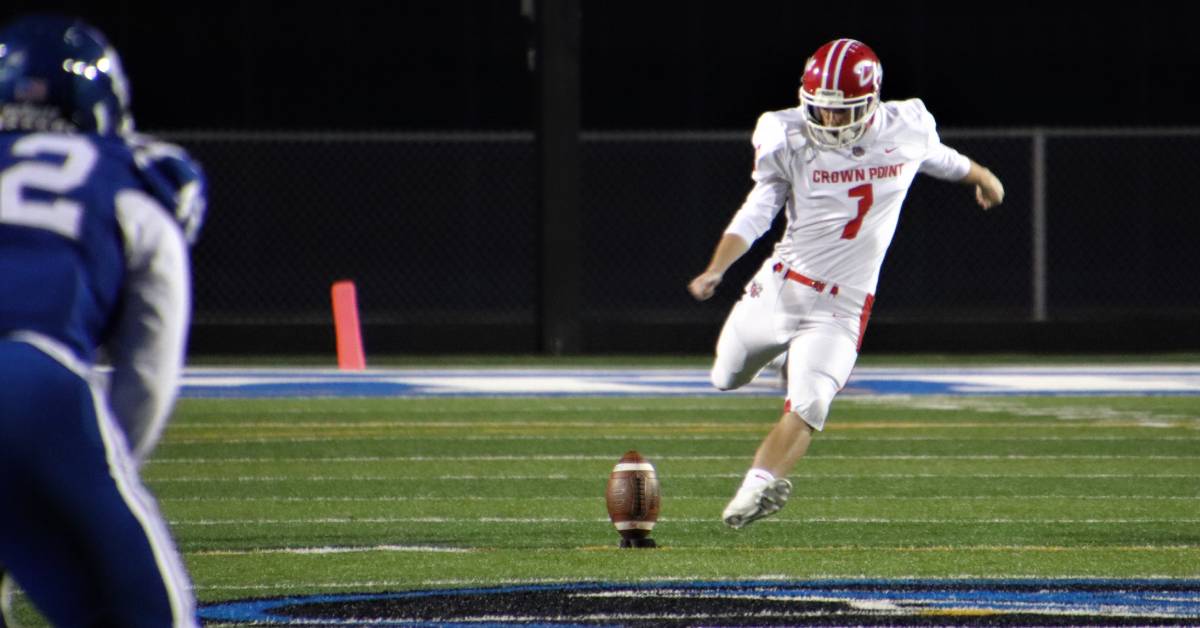 Both the Crown Point Bulldogs and Lake Central Indians were prepared to battle on the Indians home turf Friday night. It’s no secret that this match-up raises up tension on both sidelines, and for as long as the community can remember, Crown Point and Lake Central have been rivals with tonight being no different occasion.

“A lot of our guys know each other, and they grew up playing alongside one another. When you have this type of history, it’s a unique situation, and there’s a lot of emotion that plays into games like this. Sometimes you make mistakes because of it, and sometimes you make good plays because of it,” said Crown Point head coach Kevin Enright.

Each respective student section showed up in mass to support their team, Lake central decked out in Red, White, and Blue in honor of 9/11, and Crown Point sporting a classic red-out. Endless chanting and callouts were spit across the turf all night long.

“Everyone is so hype leading up to this game every year. I didn’t even try to keep a level-head going into tonight’s game, I fed off the energy because it actually helps my game,” said Nick Cicero, Crown Point High School guard.

Rivalry aside, each team had a job to do. Crown Point took the lead with a field kick late in the first quarter and held Lake Central 3-0 until late in the fourth.

Just when Lake Central began to build their momentum and managed to push Crown Point defense inside of their own 10-yard line, Crown Point running back Mathew Walters exploded through the middle and never looked back until he intruded Lake Central’s endzone for a 99-yard touchdown run.

With a standing score of 10-0 Bulldogs, the Lake Central defensive line did their best to hold the Crown Point and strip the ball but fell short.

“We were as prepared as we could be tonight. We had one play that was a bad breaker, but those things happen, and we will have to move forward from there,” said Patrick Winters, Lake Central defensive coordinator.

For Lake Central, it’s back to the drawing board.

“At the end of the day, we didn’t make the plays to take us over the top and win. It’s time to go back to work. Win or lose, it’s on to the next, and that’s the attitude we have every week,” said Lake Central head coach Tony Bartolomeo.

As for Crown Point, celebration is to be had, but the work for next week begins tomorrow morning.

“We need to get out of our own way and fix us,” said Crown Point head coach Kevin Enright. “If we can fix and focus on us, we’ll be alright.”