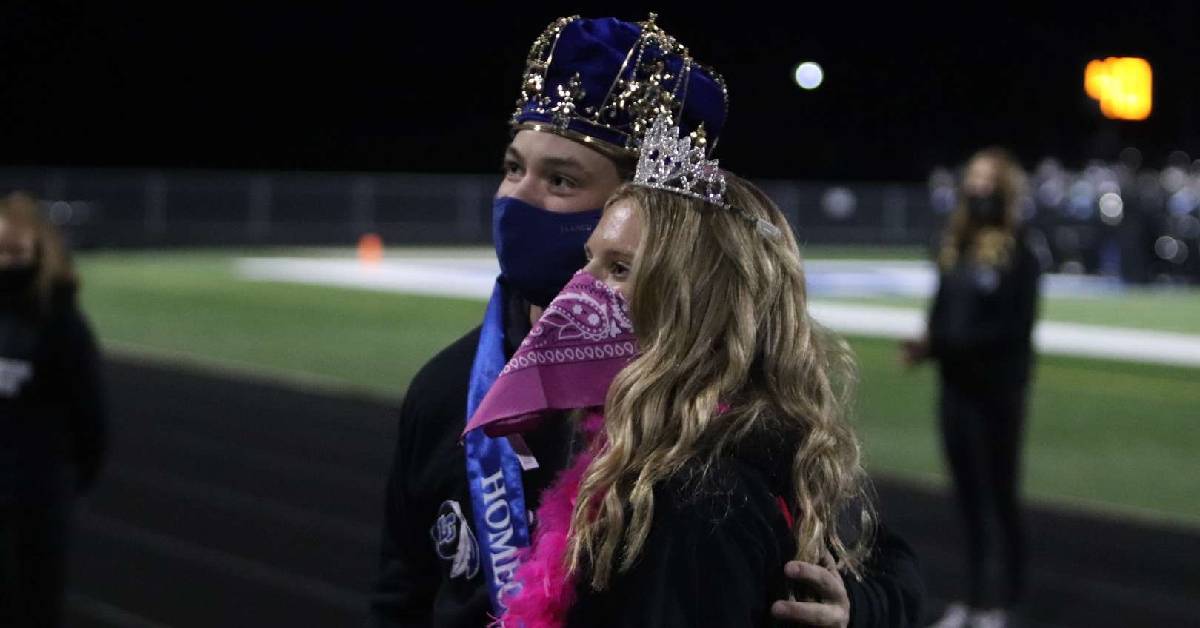 The students of Lake Central High School participated in spirit week the week preceding their homecoming football game, in which Lake Central fell to Chesterton High School 46-0. Due to the precautions set in place to keep students safe amid the pandemic, the annual homecoming dance was cancelled.

“I know COVID-19 is a serious matter and I believe the school is trying hard to find a balance between meeting guidelines and giving us the high school experience we desire, but it is not the same. Not having the homecoming dance this year has been like a punch in the gut. It makes me scared of what’s to come,” Senior Bella Brazzale said.

Each grade level was able to decorate a portion of the building to showcase their classes school spirit. Additionally, students dressed up for spirit days and took photos next to these decorations.

“The Junior Class Cabinet decided to decorate the second floor with an underwater theme. We thought it would be fun to show off some school spirit since we aren’t having a homecoming dance this year. I think it was a good idea to decorate to keep some normalcy for the school year,” Junior Jonareene Rivera said.

Seniors Ryan Huppenthal and Riley Knestrict were crowned homecoming king and queen at halftime. Knestrict explained how different it felt to win homecoming queen during a year without a homecoming dance.

“It felt great to know that my friends and other students supported me and wanted me to win,” Knestrict said.

With a unanimous vote from the school board, it was decided that the week of October 14, Lake Central School Corporation students will be released 90 minutes early every Wednesday. This change is being put in place to allow teachers additional time to plan and prepare lessons for both online and in-person students.

“We don’t take cutting out instructional time lightly. In most cases, we wouldn’t do it, but we recognize we’ve got a lot of [teachers] that are struggling and we’d like to give them some time to work with their peers,” said Superintendent Dr. Larry Veracco.

Teachers will be able to use this time to learn how to use the new forms of technology that are needed in the classroom as well as to transfer their lessons online. The extra 90 minutes is hoped to relieve pressure teachers are feeling.

“We figure that the middle of the week is a good time to have the early dismissal. The teachers can fill that gap with whatever they need the most,” Veracco said.

The concerns regarding parents being unable to watch their children will be taken care of through the Adventure Club. Bus services will also remain available.

“We’re going to look at bringing the Adventure Club in a little earlier for the elementary kids to see what the demand is, but we should be able to satisfy some of the demand,” Veracco said.

This early dismissal is intended to better the student's education and the mental health of teachers. Teachers will have more time to do whatever is needed in order to adapt to school during COVID-19 and create the best learning environment possible for students.

Senior Kayla Barowski is one of the drum majors for the Lake Central marching band, the Tribe of Pride. She works alongside Senior Kelsey Lavinand Junior Max Cervantes.

Due to COVID-19, most competitions were canceled, and due to the precautions necessary to remain safe from COVID-19, the Tribe of Pride was not able to put on a traditional marching band show. The band learned a few pieces of music to play at football games during halftime and will have movement during their final performance on October 16.

“We are not able to make intricate drill patterns or play close to each other anymore. Most of our performances are standstills, where the members have been placed 6 feet apart and only play one song. We are adding some movement for our last performance though, so I am super excited about that,” Barowski said.

In order to keep the band’s positivity levels up, the season was dedicated to new members in the hopes that they will come back for the next season. According to Barowski, even though this season is different, the bond between members remains strong.

“We have been keeping the band’s spirits up by giving them more opportunities to perform. We also have winter winds, winter color guard, and winter percussion to look forward to next semester. Usually, during a season, we are continually working hard to put together a show. This year we have been able to relax more and have more time to spend with our sections and the band as a whole,” Barowski said.

The fall show is titled Everything Seems Like Maybe: Monologues Inspired by the Writings of American Teenagers in April 2020. This differs from years past because it is typically based on a One District One Book concept.

“This is where the Lake Central elementary schools all read the same book and Lake Central theater performs a show based on a book they have read. We decided to postpone One District One Book until the following year because of the coronavirus. I still wanted to do a show, as the students who are interested in theater were really missing it. I knew that I wanted to do a show that could be performed in person and online, [so] I did a lot of research and found the show we are doing now,” Raber said.

Although there are some traditions being broken, these changes ensure the safety of students and staff during such an unpredictable time. According to Raber, being able to put on a show amid COVID-19 can produce some of the best memories.

“Small casts and crews always make for a close-knit show. It has been fun watching the kids learn how to perform a monologue, as it is very different from performing solo. I have enjoyed listening to their ideas and watching their talent grow,” Raber said.

The show will have both in-person and online options in order to ensure everyone has the chance to watch.

“We are going to do two in-person shows. One of our crew members is videotaping the show. The videotaped version will be posted on Lake Central Theater's website, www.lakecentraltheatre.com on Saturday, October24. There will be a link through anywhereseat.com provided. Patrons will still have to pay to watch the video-recorded performance,” Raber said.