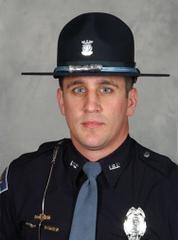 Senior Trooper Winters was nominated by Lafayette District Commander, Lieutenant Thomas McKee for his actions on April 10, 2014, when he was leaving his house to begin his regular shift just before 7:00 a.m. As he got in his patrol car, he noticed the house at 226 N. Walnut Street was on fire. Knowing that the residents of that house were elderly with limited mobility, Trooper Winters notified Regional Dispatch Center 1 (RDC 1) of the location of the fire, so that the fire department could be in route. He then went to the residence himself.

The following information is based on a report written by Trooper Winters, media interviews with the survivors and firefighters, and a written statement from Lt. Mike Hunley of the Ladoga Volunteer Fire Department. Trooper Winters initially found the southwest corner of the house was engulfed in flames. He pounded on the front door and got no response. Finding the front door unlocked he went inside and located the homeowners' grandson, 11 year-old Colin Roe, sleeping on a couch in the living room. Trooper Winters said the sound of the fire was so loud he could not hear the smoke alarms going off, and Roe was sleeping with headphones on.

Smoke from the fire was beginning to build up in the house and was now just a few feet from the first floor ceiling. Trooper Winters woke up Roe and took him outside. He learned from Roe that his grandparents were asleep in their bedroom on the second floor. Trooper Winters re-entered the home and went to the second floor, where he located Warren and Deny Bowling, who are both in their 70's.

According to an interview that Deny Bowling gave to the media, there was thick black smoke in the house when Trooper Winters woke up her and her husband. Trooper Winters guided them through the smoke and assisted them down the stairs and out of the house. At this time, Trooper Winters directed the family to a safe area and then quickly performed a safety check around the outside of the house to see if there was a propane tank or any other hazardous material that would have been threatened by the fire.

When he returned to the front of the house, Trooper Winters discovered that Warren Bowling had re-entered the house. Trooper Winters then entered the house for a third time, to locate Mr. Bowling. By this time, the thick smoke was only a few feet from the floor, and when Trooper Winters located Bowling, he could only see him from the waist down. Winters guided Bowling out of the house to the rest of the family and made sure that they were at a safe distance from the fire. By this time, the Ladoga Fire Department arrived and began to fight the fire. The Ladoga Fire Department eventually needed the assistance of the New Market and Walnut Township Fire Departments to extinguish the fire.

This is echoed by the Ladoga Fire Chief, Reggie Perry, who said, “We believe Officer Winters saved the family in the nick of time. I am afraid we would have had a fatal fire with multiple deaths”. Lt. Hunley also said that even after the fire was out, he would not let his firemen into the structure without wearing oxygen tanks and breathing apparatus, because of the toxic smoke that was present. Trooper Winters made three trips into this environment without any kind of breathing apparatus, which put his own health and safety at risk, in addition to the risk to his life posed by the fire and the risk of the structure collapsing around him. Further proof of the risk to his life is evidenced by the fact that Trooper Winters had to go to the hospital to be treated for smoke inhalation.

The Indiana State Police Lafayette District Commander, Lt. Thomas McKee said, “Senior Trooper Winters has been very humble about this nomination and was just glad to be in the right spot at the right time.”

“As an agency we are grateful the IACP and Motorola sponsor such a prestigious award event as this that brings deserved public attention to the selfless acts of troopers from across the nation.”, said Indiana State Police Superintendent Doug Carter.