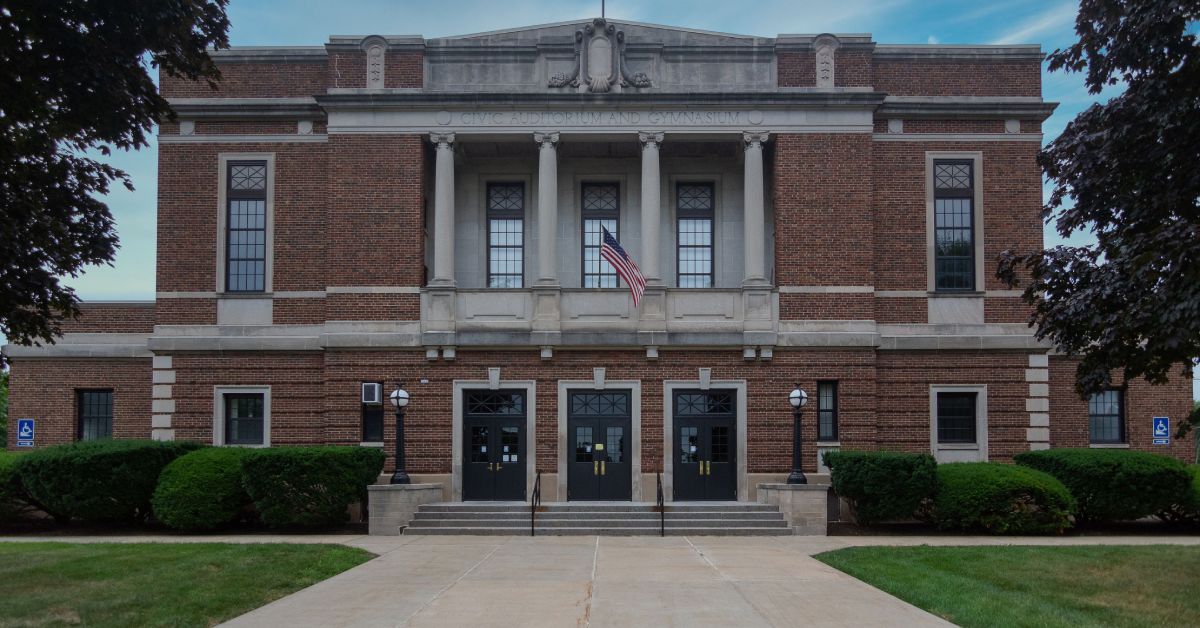 Since its grand opening in 1930, the La Porte Civic Auditorium, more affectionately known as “the Civic,” has been a community staple for events ranging from birthday parties to national basketball tournaments. With over 47,000 people coming through the building in 2021 alone, the Civic continues to fill a need within the community for a place to gather and share in celebration and friendship.

“In 2021 we had over 47,000 people come through the building. The building was used 185 times for Parks and Recreation Department programs such as pottery, ceramics, ballroom dancing, yoga, barre class, etc., and it was used 152 times by the City of La Porte for events such as COVID testing, blood drives, food drive giveaways, and COVID vaccination clinics,” said La Porte Events and Civic Director Brett Binversie.

The Civic is used for much more than government use, though. In 2021, the auditorium was also rented out for 285 private events including anything from birthday parties to weddings.

Though the Civic has never ceased in its role as a major highlight of La Porte, the building was beginning to show its age.

“For 90 years the building has been used for our community and we're in dire need of some upgrades to be viable for the next 90 years,” said Binversie.

Renovations to the Civic Auditorium began in 2018, with an upgrade to the entertainment infrastructure including stereo equipment and LED spotlights.

In 2021, with the help of the American Rescue Plan Act (ARPA), the city was able to begin making updates to other parts of the building, starting with the switch to LED lights to become more energy efficient. The city also added two large fans to aid in air circulation throughout the auditorium.

This summer, the city plans to replace the roof, and in 2022, they hope to be able to upgrade the H-VAC system and replace the auditorium seats.

The opportunity to make upgrades to the Civic will serve as a dual purpose from both a tourism and local standpoint.

“Tourism and entertainment are important parts of a community. By utilizing these funds to improve the setup, not only are we making ourselves more viable from a tourism aspect, we're also providing a facility that has dual usage, as we proved throughout the COVID pandemic. We were utilized for COVID testing five days a week for over 15 months. In one of our meeting rooms, we held vaccination clinics and we held blood drives by the Red Cross. The building has also been used as a warming center and a cooling center. There are various things that our building is used for the city and in terms of health and welfare as well as for entertainment,” said Binversie.

While there are many modernizations planned for the Civic, the historic integrity and appearance fo the building will remain unchanged. Visual historic aspects like the original light fixtures, glazed brick, and exterior elements will stay as they have been since the building was constructed.

Though the current seating holds some historic significance, the renovation of the seating will allow the auditorium to be ADA-compliant and much more comfortable to sit in. While the look of the seating will remain relatively unchanged, the accessibility and comfort will become elevated.

“Although the seating does have a historic value, one of the great things we can do by upgrading the seating is becoming more ADA-compliant. We can have handrails installed, we can widen the aisles, we can add lighting, and we can also have some wheelchair seating in the upper balconies, which is something we're lacking currently. That's one of the driving forces behind the seating upgrades,” said Binversie.

In January, the Civic gained national attention by hosting the NIBC basketball tournament, which was streamed on ESPN. Without the upgrades done to the building prior to the tournament, La Porte would not have been able to secure its spot as a host.

“We were bidding against groups from Florida, New York, Wichita Kansas, etc. And we were able to get that tournament here in La Porte. We were seen by over 100 million viewers on ESPN on that Friday, January 7, so we're excited to be able to bring that back in 2023. These upgrades have given us the ability to host tournaments like that and will give us the ability to keep them and have more come in,” said Binversie.

The Civic Auditorium has housed countless events throughout its lifetime, and the recent and upcoming renovations to the building ensure that the Civic will continue to be a La Porte treasure for decades to come.

For more information about the Civic Auditorium, visit https://laportecivicauditorium.com/

For more information about the City of La Porte, visit https://www.cityoflaporte.com/