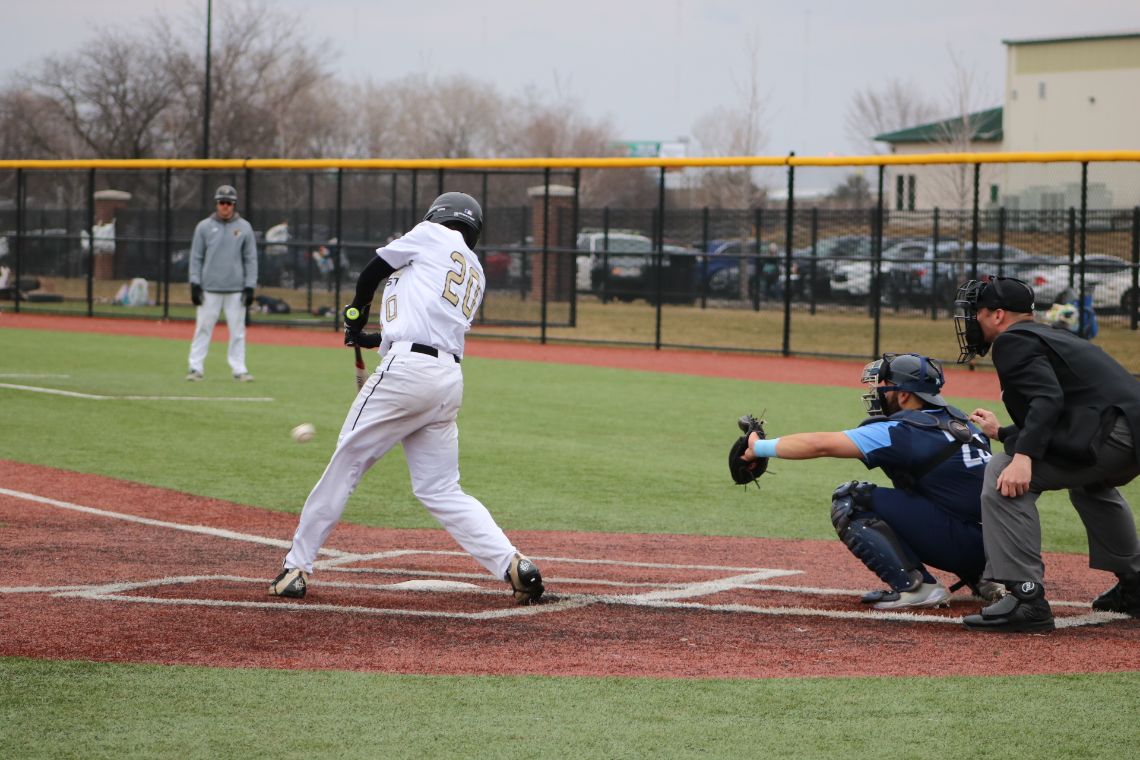 Freshman Darius Kendall (Merrillville, Ind./Merrillville) went a combined 5-for-8 at the plate with a double, a triple, two runs scored and four RBI; but the Purdue Northwest baseball team lost its final two Great Lakes Intercollegiate Athletic Conference (GLIAC) series games with Northwood University (Mich.) Saturday afternoon at Albert’s Diamond Jewelers Field in Dowling Park in Hammond, Ind. The Pride dropped the seven-inning game, 13-10, and then had the Timberwolves score a pair of runs in the bottom of the ninth to take the second game, 8-7.

In the opener, senior Jacob Lane (Indianapolis, Ind./Lawrence Central) got PNW a run early driving in Kendall from second base on a RBI single to centerfield in the top of the first inning. A wild pitch in the bottom half of the first allowed the Timberwolves to tie the game, 1-1. Kendall ripped a two-run triple to right field in the top of the second to put the Pride up, 3-1. However, NU answered with six runs in the bottom of the second to take a 7-3 lead capped by a two-run triple to centerfield.

Sophomore Tyler Kenjic (Hobart, Ind./Hobart) and junior Evan Finke (Columbus, Ind./Snead State CC/Columbus North) each had RBI singles in the top of the third and sophomore Alex Batistatos (Hobart, Ind./Hobart) tied the game at 7-7 later in the frame with a two-run triple to centerfield. Unfortunately for Purdue Northwest, Northwood answered with six runs again in the bottom of the third behind a sacrifice fly, a three-run homer and a pair of RBI doubles.

Finke got a sacrifice fly in the top of the fifth and the Pride made things interesting in the top of the seventh scoring a pair of runs on a RBI off a fielder’s choice by Batistatos and a sacrifice fly by Kendall. Freshman Kyle Freel (Dyer, Ind./Lake Central) suffered the loss (2-2) as the game one starter for PNW throwing 2.2 innings and allowing 15 hits, 13 runs (all earned) and two walks with a pair of strikeouts. Junior Jade Doyle (Greenwood, Ind./Center Grove) threw the final 3.1 innings and gave up just two hits with three strikeouts.

NU took the early 1-0 edge in Saturday’s late game scoring on a RBI single in the bottom of the first inning. After three scoreless innings, PNW went up 2-1 in the top of the fifth following a game-tying RBI double that bounced over the fence in right field and a RBI triple down the right field line by senior Austin Kordik (West Chicago, Ill./College of DuPage/Community). The Timberwolves took back the lead, 4-2, in the bottom of the fifth with a solo homer and a pair of RBI singles.

The Pride were not to be outdone and answered right back in the top of the sixth scoring four runs on back-to-back RBI singles by seniors Jonny Albers (Waterloo, Ill./Waterloo) and Mike Mikulich (Hebron, Ind./Hebron) followed by a two-run double to left field by Kordik to take a 6-4 lead. An error and a sacrifice fly in the bottom of the seventh scored two more runs for NU to tie the game at 7-7. A RBI triple to right centerfield by sophomore Hunter Thorn (Portage, Ind./Portage) in the top of the ninth put PNW back in front, 8-7; but a pair of RBI singles in the bottom half allowed Northwood to tie the game and complete the series sweep with a walk-off win.

Purdue Northwest (9-10 overall/2-6 GLIAC) takes a break from conference play to host University of Indianapolis on Wednesday, April 4, for a doubleheader. The first game of the pair is scheduled for a 1 p.m. start at Dowling Park.