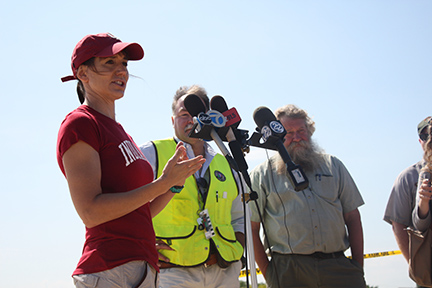 In July 2013, when Nathan Woessner, then 6, of Sterling, Ill. explored a depression in the sand at Mount Baldy, a favorite tourist spot at the Indiana Dunes National Lakeshore, and suddenly found himself trapped beneath 11 feet of sand, his rescue riveted the public as much as the implausibility of it baffled scientists.

Erin Argyilan, Ph.D., Associate Professor of Geosciences at Indiana University Northwest, who witnessed the frantic struggle to free the boy, said that according to everything she knew about geology, this sort of thing just could not happen. But it did, and Argyilan has since devoted countless hours on the dune, taking photos, scrutinizing sediment and pouring over her knowledge of coastal landscapes in an effort to eventually be able to explain what is a previously unreported geological hazard.

A year later, as young Nathan and his family work to put the terrifying incident behind them, and park visitors find alternative lakeshore landmarks to visit in the wake of Mt. Baldy’s indefinite closure, scientists from the Indiana Geological Survey (IGS) have since joined the research effort. Thirteen months later, a full-scale research project is underway, at the price of about $90,000 funded by the National Park Service. Argyilan serves as one of three principal investigators, along with Todd Thompson, Ph.D., assistant director of research, and G. William Monaghan, Ph.D., senior research scientist, at the IGS.

In August, journalists were allowed to traverse a safe area on top of the 126-foot dune, where park officials and scientists announced the next phase of the research as they work to explain exactly why an Indiana Dune would act this way.

The IGS, a research institute of Indiana University, has brought two ground-penetrating radar systems to Mt. Baldy to further investigate 40 “anomalies” that the Environmental Protection Agency identified last fall. The 100 Mhz and 250 Mhz rigs parked on the dune through August are essentially “imaging” the internal structure of the dune, similar to how a CT scan would image the inside of a body. The researchers are also using a geo probe to bring up sediment from deep inside the dune.

The work will help researchers create a 3-D map of the internal structure of the dune which they suspect is comprised of decaying trees and small structures and buildings. Over the past 70 years, the dune has been swiftly migrating southward, covering the former vegetation and landscape. The age of the materials and the wet conditions during the spring of 2013 may have forced the materials to become unstable, experts say, collapsing and creating openings to the surface.

Since last year’s incident, six additional holes have been discovered, all in close proximity to the first. The most recent was 18 by 22 centimeters and 1.4 meters deep, discovered the day the IGS arrived with the radar equipment.

While her IGS colleagues focus on mapping what lies beneath the dune, Argyilan will continue to examine the structure surrounding the five new holes, or “collapse features.” Specifically, Argyilan has been looking at where these holes open, their dimensions, and the sediment surrounding the holes for clues into how the structures are formed and persist in unconsolidated dune sand. In May, Argyilan also found a buried tree with a branch that terminated into a smaller hole or chamber. When Argyilan found fungus in the center of a branch she was studying, she brought in an IU Northwest colleague who is an expert in fungus.

Peter Avis, Ph.D., associate professor of biology has joined the researchers to provide DNA analysis of the organic material Argyilan brings back to the lab. A plant and fungal community ecologist, Avis’s studies focus on the interactions between plants and fungi. He combines the methods of molecular biology and genetics, such as DNA fingerprint analysis, with those of field biology and ecology.

“There may be a critical depth,” Avis explained, “perhaps about 20 feet above the old surface of the dune, where heavy rains can begin to get into trees under the surface. It may be that the dune is at a point where the trees are close enough to the surface where decomposition of trees by fungi is working to trigger the collapse and create the holes.” 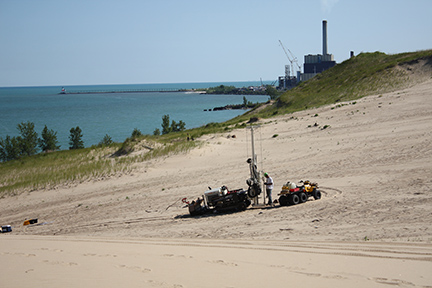 Argyilan and Avis believe that Nathan could have fallen into a vertical tree trunk that had decomposed over time from the inside out, leaving a “tube” of bark from large oak trees that could have been 40 feet in diameter.

“There seems to be lots of data that support this idea so we are following this path, but not to the exclusion of other possible mechanisms,” Argyilan said.

Examination of the holes discovered in the past year seem to match this hypothesis. For instance, the researchers were able to insert pipes into the holes several feet down at an angle. Three of the holes also had pieces of woody material inside, though not throughout the hole.

“This implies that we are looking at dipping tree branches,” Argyilan said.

Argyilan continues to draw clues from the sediment surrounding the holes.

“When you look at the sand, there are these faint black lines that look like they are going horizontally,” she explained. “You can actually look at the grains and see how the sand was laid down. This tells me that the sand was laid down that way. It wasn’t disturbed. When people were first looking at this idea with Nathan they said maybe someone dug a hole or maybe there was a collapsed structure underneath, but all the sand looks undisturbed, which would be consistent with bearing around a tree.”

Further exploring the connection between the trees and holes, Argyilan is studying the mineralogy of the cement that forms around the decaying trees that likely provides the structure that keeps these holes open.

“The question is, are these holes opening underneath the ground and staying open and having some sort of structure?” Argyilan said. “We are investigating how the structure of the hole actually forms. There may be a mineral cement that is forming a cast around the trees, for example, and other factors, like climate and water funneling into the dune and causing decomposition.”

The researchers expect to have a preliminary report completed by the end of this year.