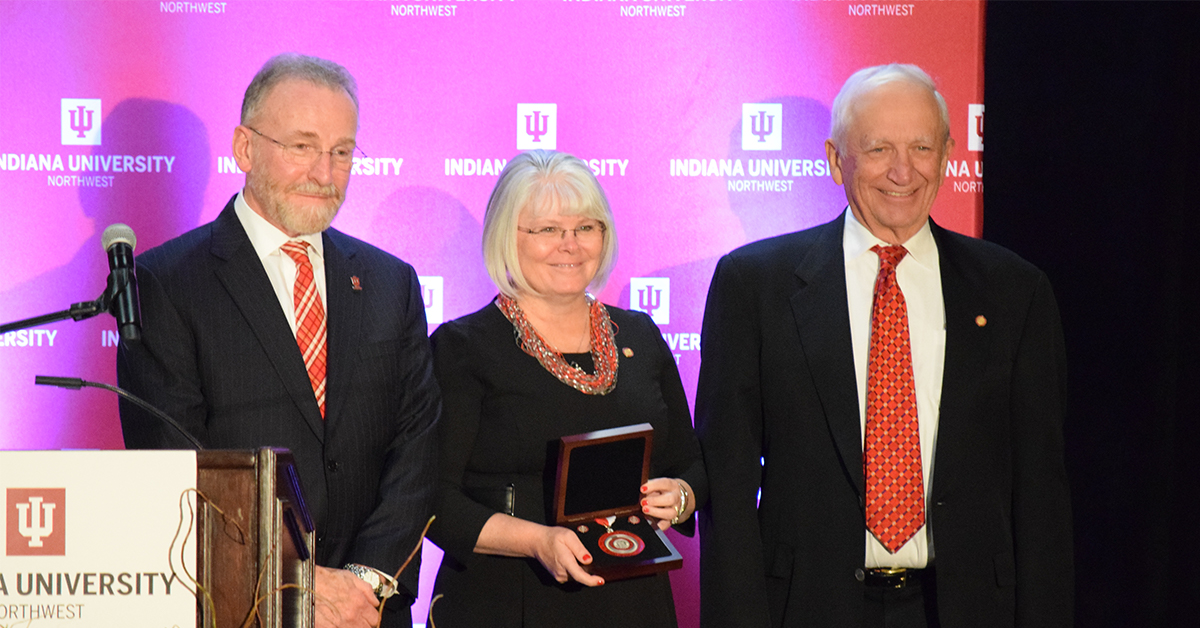 All of the proceeds for the night went to funding student scholarships. For IU Northwest student success is their number one priority, so the Chancellor’s Medallion dinner was all about celebrating that along with the community who has given back to the IU Northwest community in some way. Vice-Chancellor for University Advancement and External Affairs, Jeri Pat Gabbert, was enthused to come together to honor the recipients who were more than deserving of the award.

“Tonight is a wonderful opportunity to celebrate those who are close to Indiana University Northwest while also bringing people together to provide for our students,” Gabbert said. “Through our scholarship and fundraising efforts and through the philanthropy of others, I think that’s what continues to drive what we’re doing in terms of being able to support our students.”

One of the speakers of the evening who brought awareness to how much good the scholarships can bring was a former student and Chancellor’s Medallion Scholarship recipient, Katherine Sullivan. She was awarded the scholarship in both 2016 and 2017 and is currently on track to finish her master’s degree in Health Services Management at IU Northwest next month.

IU Northwest has given me so many opportunities that I don’t know where to begin, from the community-driven projects to the Chancellor’s Medallion Scholarship, I have been lucky enough to receive such amazing support and guidance from some of the greatest faculty and staff - and with that I could never say how truly thankful I am,” Sullivan said. “And my story is not the only one, I am simply one of the tless lives who have been impacted through the philanthropy of those here tonight.”

IU Northwest Chancellor, Dr. William J. Lowe, will be stepping down at the end of this academic year after almost 10 years of service. With this being his last Chancellor’s Medallion ceremony, he wanted to make sure his chosen recipients were those who are as devout to IU Northwest as he is. He also took the time to thank each and every individual who has been prominent in the success of his students.

“By being student-centered, but also human-centered, we are here to help students far beyond their academic experiences, which makes this campus so much more than simply a place to study and earn a college degree,” Lowe said. “IU Northwest has been very fortunate over the years to have benefitted from levels of philanthropic support that has allowed us to be recognized and distinctive in our Region and among Indiana University campuses.”

“As IU Northwest exemplifies, the regional campuses of Indiana University have made vital contributions to their regions and the state of Indiana for many decades and are increasingly the first choice for some of the state’s most outstanding high school students.” McRobbie said. “Included in the 9.2 million-plus raised, are the funds to establish 41 new student scholarships that will allow students who could not otherwise afford to attend college to come to IU Northwest and earn an education that will change their lives.”