During September, NWI Innovators of the Month shines the spotlight on Society Members – Adam Woolever, Jon Groth, Marie Kubina and Bill Keith. Highlighted below is new Society Member Adam Woolever who was inducted for sharing his “tech saavy” with students and faculty at Paul Saylor Elementary School. Also featured is Society Fellow Jon Groth for helping to save and repurpose an historic 1912 Grand Trunk Passenger Railway Station. All are being celebrated as part of the 2016 – 2017 Class of Innovators, the largest group inducted into The Society of Innovators. The Society is part of Ivy Tech’s Gerald I. Lamkin Innovation & Entrepreneurship Center for Excellence. For information, contact O’Merrial Butchee, Director, Lamkin Center at (219) 981-4942, or John Davies, Managing Director, Society of Innovators at (219) 981-1111, 2292. 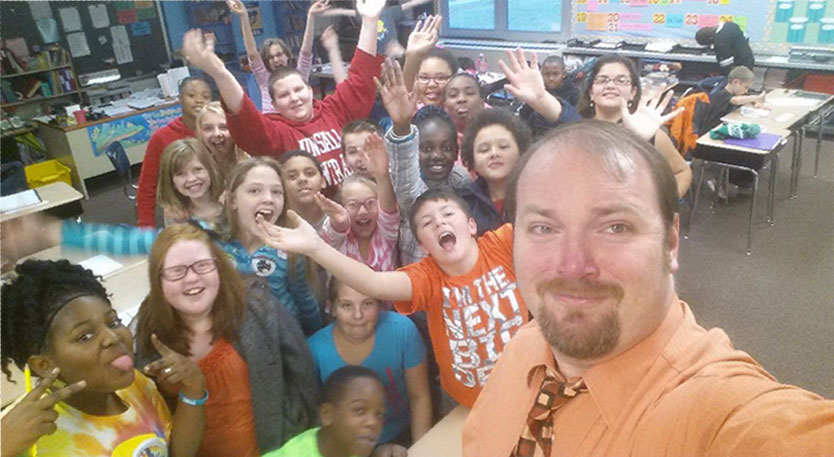 Teacher Inspires Tech Savvy Among Students & Faculty!
Adam Woolever practices a discipline in the classroom that he learned when he was climbing 400 foot communications towers to install electronics equipment. For five years before he entered teaching, he custom-built computers, installed wired and wireless networks and performed web service maintenance while working for a technology company in Rensselaer. While always wearing a safety harness, he climbed upwards of 75 different towers. But what he carried away from this experience is the importance of constantly moving upward to benefit students. Just recently he spoke on new technology at a Portage Township symposium. In fact, he’s a sort of the “go-to” guy that both teachers and students go to about technology and no wonder, he was a kind of “Indiana Jones” on the communications towers climbing ever upward. This marks his 8th year in teaching 5th grade at Paul Saylor Elementary School in South Haven and last year, he was nominated by Principal John Zack and inducted into the Society of Innovators. His nomination reflected a willingness to share skills of daring do about new technology not only with students, but fellow teachers. While he wasn’t asked if he was afraid of snakes, this Indiana Jones persona is definitely committed to being a guide by the side to help students grow in knowledge about technology. 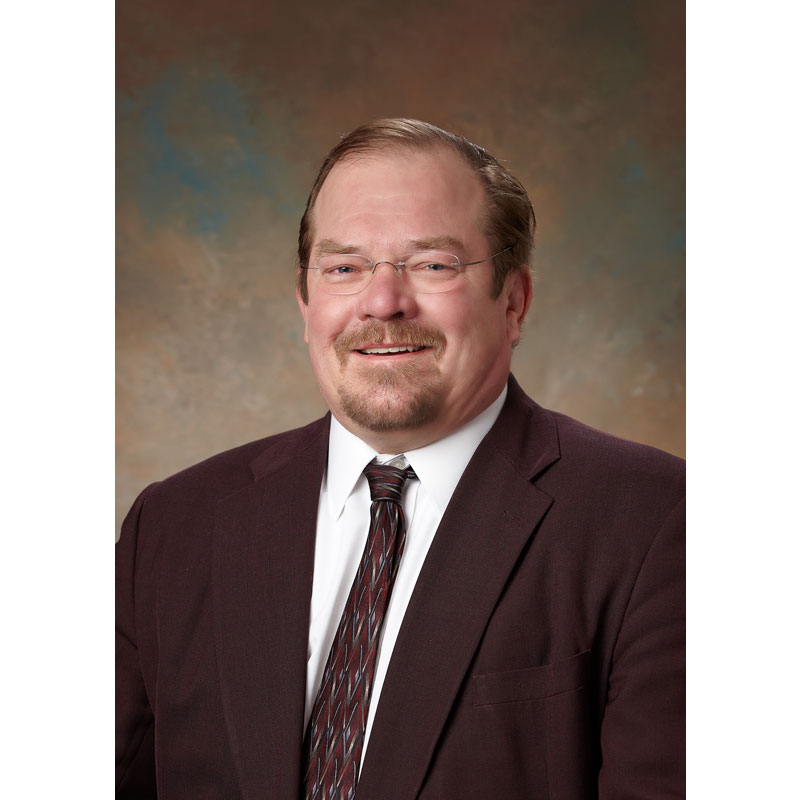 The Transformation of a 1912 Railway Station into a Classroom!
The 1912 Grand Trunk Passenger Railway Station in Valparaiso had a one-way ticket to a landfill. But Jon Groth marshaled the support of the community to save this building and transform it into a 21st century classroom. Jon is the Area Director/Principal of the Porter County Career and Technical Education. With the support of lots of volunteers, this 3200 sq. ft. building was pulled by a 5 ton truck about 1/8th of a mile from its location just west of Calumet to its present home just south of the school. It was fraught with drama during one critical point when Canadian National agreed to close the track for eight hours to allow the building to be winched up a slight slope and over the tracks. “As they started to pull it up that slope, the weight pulled the truck back to the building,” Jon said. So they tried again, and broke a chain. The operators got another chain and finally winched it across the tracks “with no time to spare,” Jon added. What’s next? Named a Fellow in The Society in part for repurposing an historic building, Jon is preparing to open a cosmetology school in the refurbished classroom during the 2018 – 2019 year. This program will be offered on location rather than be outsourced. “It will be great new addition for our students,” Jon added.

Highlighted below is Society Member Marie Kubina, Curriculum Director, sharing the innovative curricula for the amazing people served at Opportunity Enterprises through a structured approach. Also featured is Society Fellow Bill Keith discussing his new assembly and distribution center in St. John for his innovative solar attic fans that are found at the Honolulu International Airport in Hawaii and all around the world. Innovators are from Jasper, Lake, La Porte, Newton, Porter, Pulaski and Starke Counties. The mission of The Society of Innovators is to cultivate creativity and innovation as a growth strategy by discovering and encouraging, celebrating, educating and honoring our most innovative people across the 7 counties of Northwest Indiana. Click on www.nwisoi.org for details. 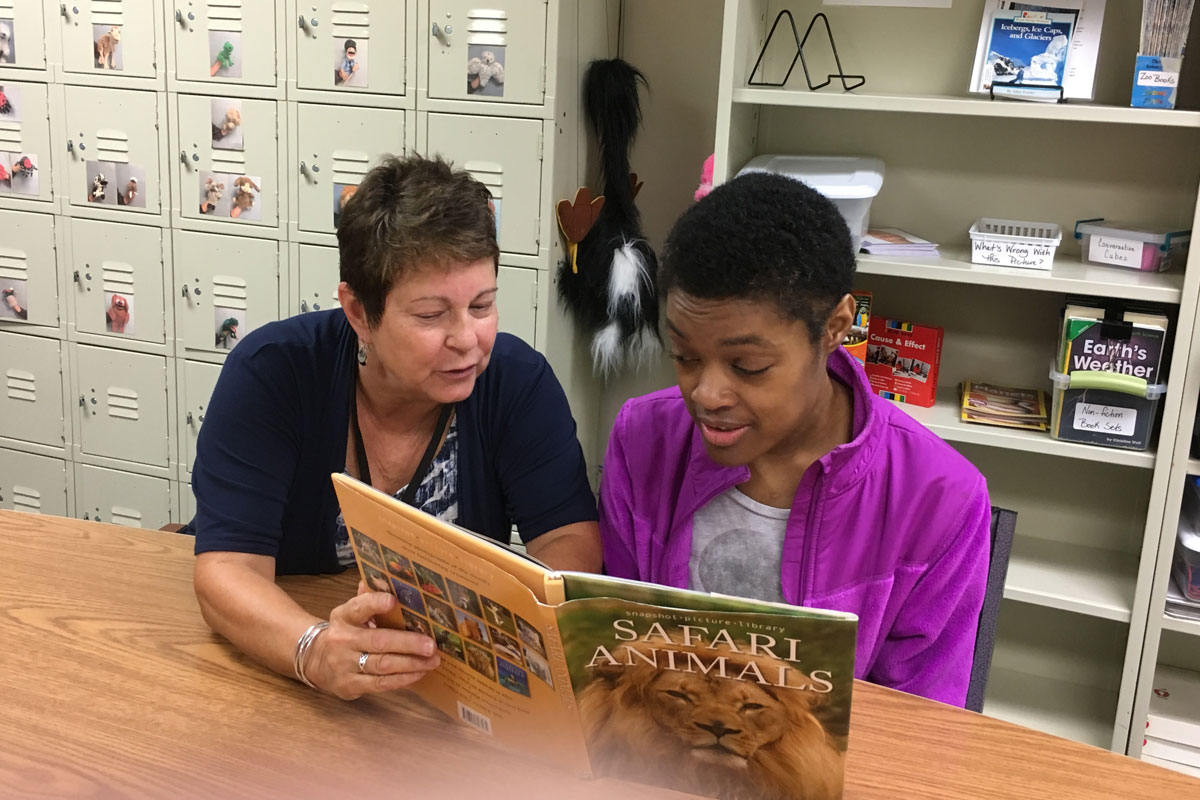 350 ‘Amazing People’ Benefit from Curricula at OE!
Marie Kubina, Curriculum Director, Opportunity Enterprises, Valparaiso, tells a riveting story of the ordinary goodness of life involving the amazing people that she and her team serve. She once watched the wonder on the faces of adults who listened to their heart beat for the first time using a stethoscope. It was a reminder of the power of learning! This took place during the first of a series of cutting edge curricula she had launched to replace the sheltered workshop approach. Marie has been on a mission to replace this standard model with a new curricula that provided purpose, excitement, social interaction, and learning fun. The program was called “Enriching Possibilities” and it offered a structured approach. Inducted into The Society of Innovators, this trained educator re-invented OE’s approach with a variety of robust curricula that serve adult clients, all without state funding. In fact, she and her five-member team implemented their fifth program entitled Trend starting this May that puts clients through activities, ranging from cooking to exercise to computers to the arts. Other clients benefit from “Daily Living Skills,” “Renewed Horizons,” and “Quest.” Today, about 350 clients are served by this curricula based upon their level of functioning. “As hard as innovation is, it’s inspiring to keep at it and do something that nobody else has done,” Marie said. 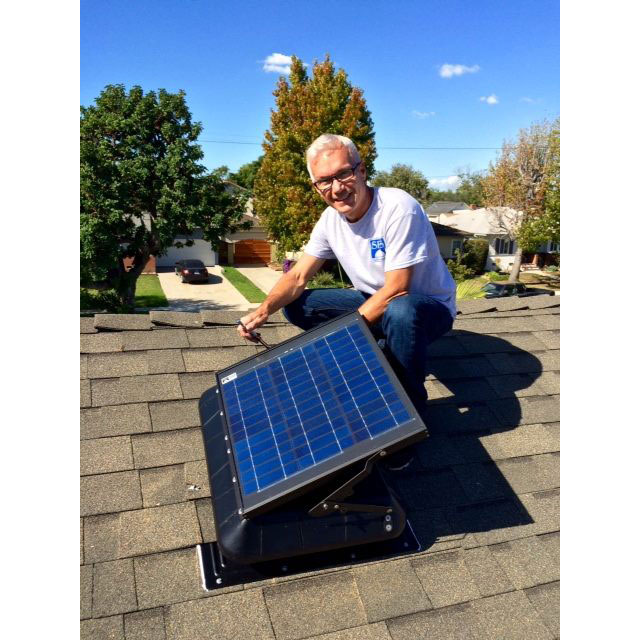 Green Entrepreneur Brings Distribution of Solar Fans back Home!
When Green Entrepreneur Bill Keith launched his solar power attic fan business in 2000, he didn’t expect that 17 years later, he would have sold $20 million dollars of fans now available in four models. He operated his family business called Sunrise Solar Fans out of his 100-year old renovated barn/office next to his home in St. John. For the past 16 years, he distributed his products from Warsaw. But now he has a new 12,000 sq. ft. building to assemble and distribute his products a little over a mile from his home. Named a Fellow in The Society in 2007, he was inducted for launching this innovation resulting from his job as a roofer working with his brother. He recalled that because he was smaller than his brother he was the one who inevitably would enter a small hole cut in the roof and then install electric fans to cool the attics. That led him to look for better products using solar power. As he investigated fans on the market, he found their designs lacking. He finally used the equity in his home to raise the necessary capital of about $250,000 to launch his new design. He got a big break when Honolulu International Airport installed his solar fans to cool the airport terminals. Today, he is likely Indiana’s only entrepreneur manufacturing and selling solar powered attic fans globally. Click on www.sunrisesolar.com