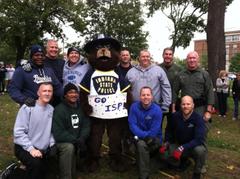 Each team entered consisted of 10 members. When the dust settled the Indiana State Police team stood as the grand winner after five undefeated single elimination rounds!

The Indiana State Police selected Riley Children’s Hospital as the recipient of $700 that was raised during the event.

For more information about the SECC visit: http://www.insecc.org/