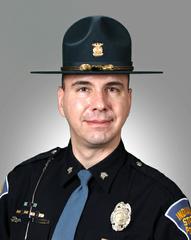 The Superintendent of the Indiana State Police, Douglas G. Carter has announced the promotion of Sergeant Terry Gose to the rank of Lieutenant. Lieutenant (Lt.) Gose will serve as the District Commander of the Lowell Post which covers Lake, Porter, LaPorte, Newton, Jasper, Pulaski and Starke Counties.

Lt. Gose is an eighteen year veteran of the department.

Gose was accepted into the Indiana State Police Recruit Academy and in June 1995 he was appointed as a Trooper and assigned to the Lowell Post where he worked Lake County for five years. He was then assigned as a detective in the Gaming Division for one year. Gose was then promoted to the rank of Corporal to serve as the District Duty Officer until he was promoted again in 2003 as a District Squad Sergeant.

During his career, Gose has served as a Field Training Officer, was on the Tactical Intervention Platoon, was a Field Training Officer Coordinator and crash reconstructionist. Lt. Gose was Officer of the Year for 2013 by the District One Law Enforcement Council and the Northwest Indiana Public Information Officer’s Association. He also was a recipient of the ISP Silver Star which is given for the performance in a distinguished manner beyond reasonable expectations by performing a deed of personal bravery.