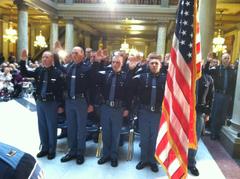 Gov. Mike Pence delivered the keynote speech welcoming 47 new troopers to the Indiana State Police. The graduation ceremony was held in the rotunda of the State Capitol at 6:00 p.m. Each graduate took the oath of office, delivered by the Honorable Brent E. Dickson, Chief Justice of the Indiana Supreme Court, after which each trooper was presented their badge.

The 73rd State Police Academy began November 10, 2013 after 3,000 applications were submitted and narrowed to 80 people who were selected to start the academy. Of the 80 that started, 47 crossed the graduation stage having completed 25 weeks of training that included 600 hours of classroom instruction as well as nearly 300 hours of hands-on practical and scenario based training exercises.