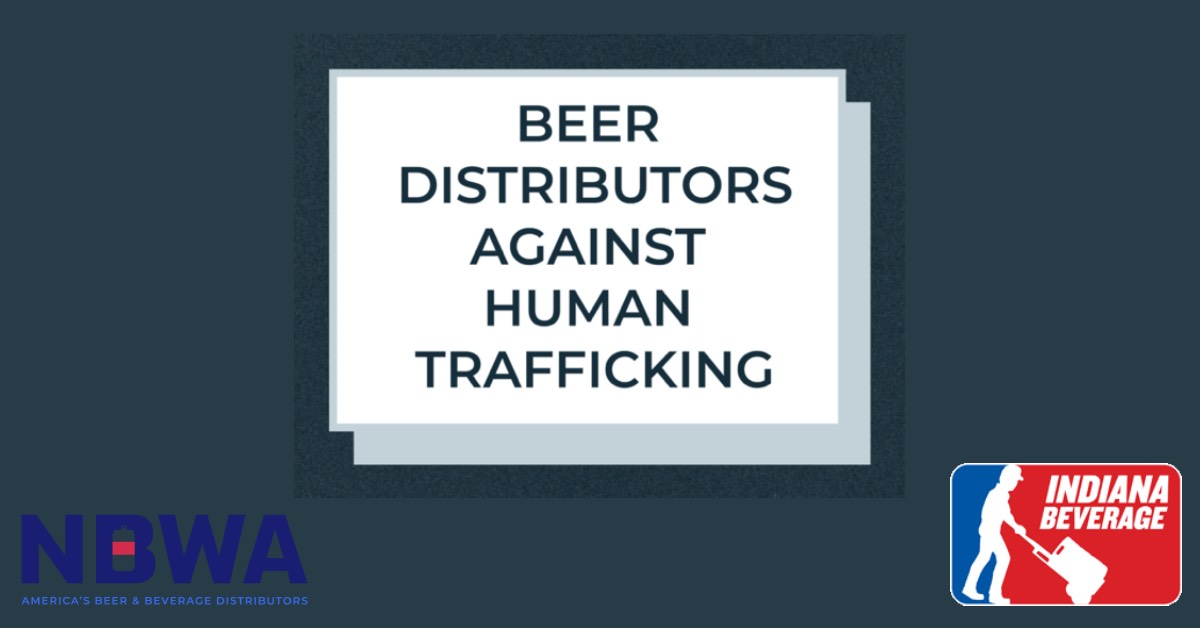 Indiana Beverage and their sister company Five Star have recently been recognized as distributors certified against human trafficking, an unfortunate, lucrative crime in the United States that many are working to bring awareness to.

The plan to focus on this topic was brought to the distributor’s attention through the National Beer Wholesalers Association (NBWA), of which Indiana Beverage is a member. The NBWA provides distributors with information on important topics, such as human trafficking, and then lets the distributor work with the subject matter in a way that’s best for their company.

“One of those items were on human trafficking,” said Brand Manager Liza Hilliard. “The NBWA presents the information they have on various topics, and it's up to the distributor if they want to implement it. We went basically full bore with the topic; we took all the resources that they had and presented it to our sales team; we created our own PowerPoints; we have signs on our trucks; we pretty much took the initiative from there.”

Beer distributors were chosen to help fight against human trafficking as 142,000 beer distribution employees service more than 640,000 accounts, and have access to many stores and areas that the general public does not.

When Hilliard, previously working in people development handling organization initiatives, first encountered the subject matter through the NBWA, she knew this was something she wanted to implement at Indiana Beverage. She met with President Bob Jacobs, who also had the same mindset, and got started on a plan of action right away.

“We created basically a 360 plan, including verbal and written content from the resources that the NBWA provided. We came up with our own plan of implementation, and the NBWA provided the foundation,” Hilliard said.

This in-depth plan allowed Indiana Beverage to spread awareness in a variety of ways, which included sending an NBWA video out to all employees, printing highly visible posters for the bathrooms, printing individual tip cards for drivers and consultants to be distributed in mailboxes and then placed in their vehicles, placing the NBWA logo on their website as a certified distributor against human trafficking, and numerous presentations to the entire company as a safety topic.

Hilliard said this has allowed others to become more aware of just how serious human trafficking is. Thankfully, no reports of human trafficking have been noted in Northwest Indiana recently, but having that awareness is always crucial, especially so for a distribution company as many team members are always on the road.

“This has helped elevate people's awareness and understand that this actually is a problem,” Hilliard said. “So as far as tangible outcomes, I would say the number one is increasing awareness and number two is helping people understand that this is a problem that is not exclusive to Indiana. We're even reintroducing this again to our sales and delivery teams soon because they're the ones in the market all the time. We haven’t had any reports, but I would say that's a good thing."

Hilliard mentioned a past challenge was making sure this is a topic that is constantly at the front of everyone’s mind. With consistent messages, presentations, and reminders to employees, she believes this will help combat the issue. However, Hilliard is always looking for ways to grow and expand on the awareness as well.

“We did this last year and we're reintroducing it again, and this year it's basically the exact same way, including getting fresh signs on the truck. We have posters in our bathrooms, and this has become an initiative for our safety committee, which I’m a part of. We have topics that we're visiting year after year, and now this is a topic that’s been added to the list so it will always be fresh in our minds," Hilliard said. "We have it on social media; we have verbiage in our handbook; we're doing the most that we can to keep this front of the mind for employees at a regular cadence."

As a people-centered company, Indiana Beverage is always looking for ways to help the community. By taking active measures to spread awareness on human trafficking, Hilliard said this has allowed the company to show everyone that they are an organization that’s true to their word.

“It's not always about the breadth of work that we do,” Hilliard said. “We truly care about the communities that we serve and the wellbeing of everyone. Being vigilant against something like human trafficking is a gesture of that. It’s one thing to talk about it, but it's another thing to actually take steps to walk the talk, and this is an example of showing we truly do care about people. We truly do care about our community.”