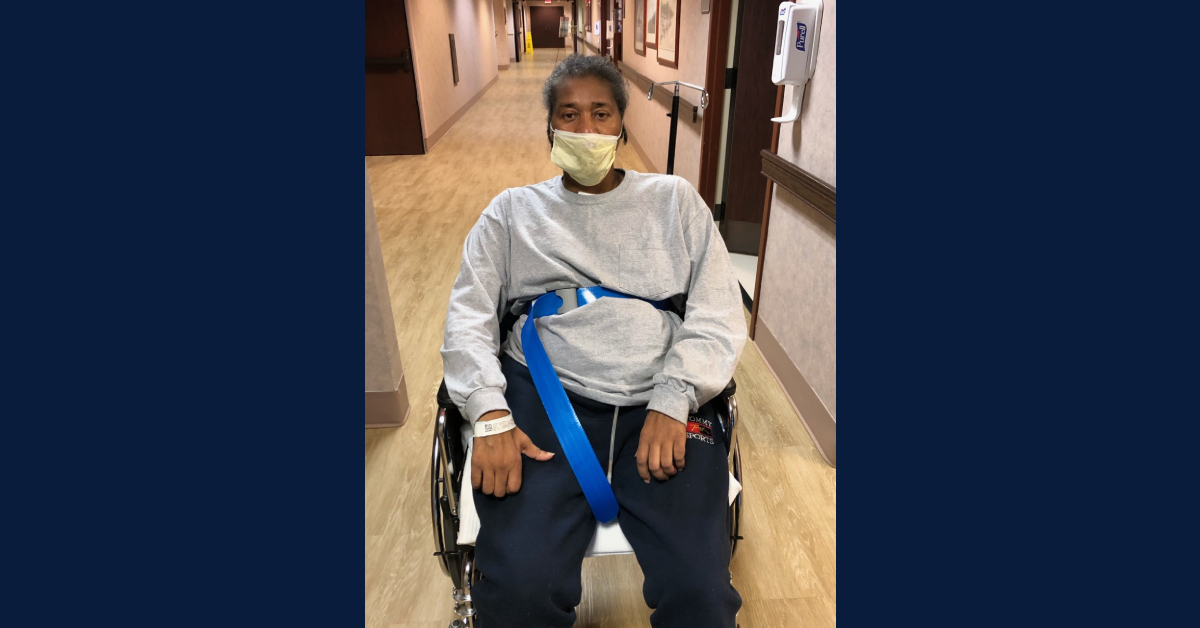 Kossinai Watson knows exactly where he was when he caught COVID-19.

“I was at a family barbecue,” Watson said. “It was my family barbecue, something I always go to. But someone there brought someone else. Turns out that person had it but didn’t know they had it.”

That was nearly four months ago. Since then, Watson, a married, 52-year-old construction worker and father of three, has spent his time in hospitals across Northwest and North Central Indiana, including Elkhart General Hospital, Regency Hospital, and Northwest Health - Portage.

“They treated me good here,” Watson said of the staff at Inpatient Rehab at Northwest Health - Porter's location in Portage. “I couldn’t even walk when I got here. Now, they got me back to walking and everything.”

“It hit me hard,” he said of his experience with the virus. “I was sitting on my bed, and I had asked my wife to make me something to eat. She brought me some soup, but I couldn’t even eat it. I felt like I couldn’t even move. I tried to lay down for a minute to rest. I tried to get up, but all I could do was sit. I laid back down and asked her to call the paramedics.”

Watson said that he felt weak and could barely move as if his body was “frozen.”

“I told my wife something was really wrong with me.”

By the time medics arrived, Watson could barely walk and was having trouble with his vision. Responding paramedics assisted him out to the ambulance and transported him to Elkhart General Hospital for treatment.

After a week at Elkhart General Hospital, Watson’s breathing became severely impaired, to the point that he could no longer breathe on his own. The decision was made to intubate him and place him on a ventilator, where he stayed for the next three months.

He also underwent dialysis for an extended period.

“They knocked me out. I was asleep for 18 days. When I woke up, my wife was there, and I asked her why she didn’t come back like she told me she would,” said Watson.

“She told me, ‘Babe…do you know how long you’ve been asleep? You were asleep for 18 days.’ I looked up at the date on the board. I couldn’t believe it, I thought I had just been asleep for a day.”

Watson credits his recovery to his personal determination and strong faith in God.

“I pray a lot, and I don’t like to give up. I don’t want to leave yet,” said Watson. “Either you do whatever you got to do to live… or you just go on ahead and give up and die. I’m not the one to give up, so I prayed, and I did not give up.”

“Sometimes I even cried, but I still came through it. I still got through this thing. As long as you pray, you have God there to take care of you, but I knew I had to do my half, too.”

Watson also gives much of the credit for his recovery to the Inpatient Rehabilitation staff at Northwest Health - Portage.

Despite the challenges of facing a serious illness, Watson was known to break out into song.

“One of my favorites is, “Never Would Have Made It” by Marvin Sapp. I sing it all the time, even here in the hospital.”

Watson bonded with the staff at Northwest Health - Portage.

“There’s a woman here named Annie. She treats me like her son, so I started calling her ‘mom.’ She likes the way I sing, so she said she was going to record me and put me on YouTube.”

“We shared a common ground, and since then, we have been good friends,” said Watson.

But that’s not all - Watson says that he even nicknamed some of his doctors.

“I have four doctors here and I could never remember their names, so I just gave them nicknames,” said Watson. “There’s one I call ‘The Texan,’ because he always dresses like he’s from Texas...like he’s been out riding horses and all. There’s a tall one, I just call him, ‘Doc.’ Then there’s another one who is always asking me for tickets backstage, so I call him, ‘Mr. Cool.’”

“Finally, there’s one more who is always reminding people to wear a mask and stay six feet away from other people, so I call him, ‘Six Feet,’ which is funny, because he’s only like four feet tall,” Watson said with a laugh.

Watson’s journey met a successful end when he was discharged from Northwest Health - Portage on Tuesday, October 27. He said he was eager to finally get home to his family.

Watson has this bit of advice for everyone else dealing with COVID-19.

“I would just tell everyone to stay prayed-up and follow the precautions: wear your masks and keep your distance, because this is real, this is not a game.”

For more information about Northwest Health - Portage, visit them online at https://www.nwhealthporter.com/.