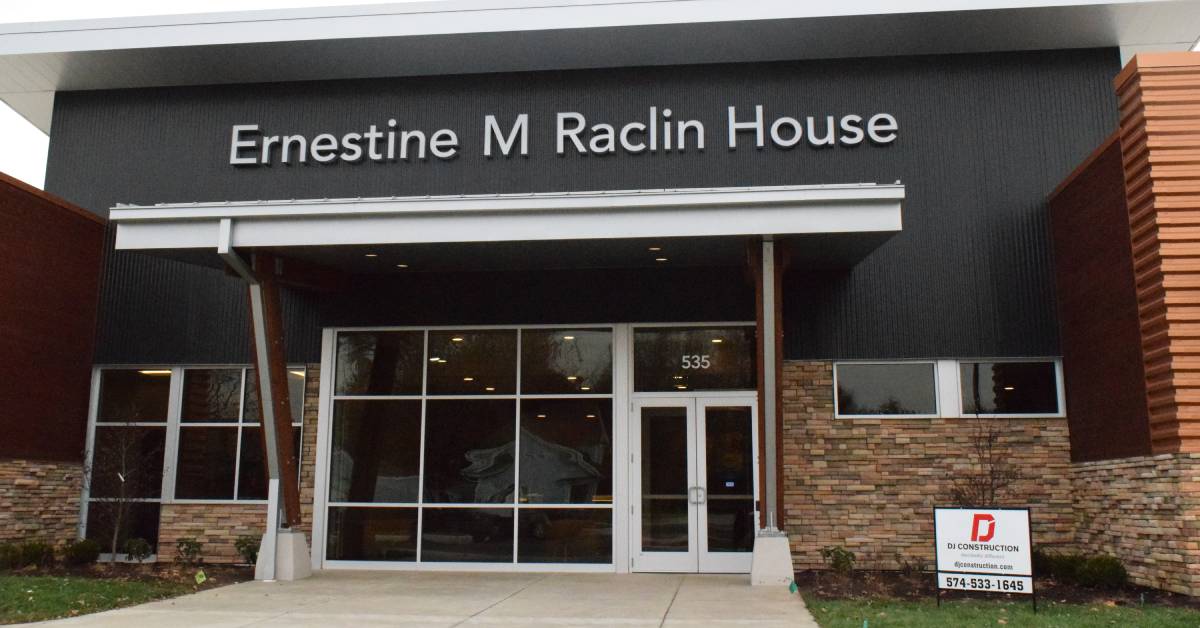 On May 15, 2009, the Hospice Foundation, former Mishawaka Mayor Jeff Rea, and City Planner Ken Prince held their first meeting. It was the Hospice Foundation’s vision to relocate all of Center for Hospice Care’s St. Joseph County operations, which included four separate locations, into a single location at the geographic center of their operations near Downtown Mishawaka. Over the past 10 years, they have built four new buildings and have redeveloped two existing structures. Tuesday night’s dedication of the Ernestine M. Raclin House marked the completion of the final phase of construction.

The Ernestine M. Raclin House will be the 17,000-square-foot home to a 12-bed inpatient center that will feature a beautiful view of the St. Joseph River, a sunroom, family kitchen and gathering areas, as well as designated rooms for visiting children and teens, and for spiritual reflection. Vice President and Chief Operating Officer of the Hospice Foundation, Mike Wargo, wanted to thank everyone who was a piece to the puzzle that made the new campus possible.

“In all, over the years, we acquired more than 20 contiguous parcels to create this six-acre campus,” Wargo said. “After completing the first phase of campus development in 2013, we started work on this phase a little over five years ago, when we launched our most ambitious fundraising campaign in our 39-year history—a goal of ten million dollars to support capital, endowment, and programming needs.”

Led by Catherine Hiler and a focused group of community leaders, the Cornerstones for Living: The Crossroads Campaign began on July 1, 2014. Today, that campaign has exceeded expectations and has raised a total of $13.4 million. Right now, Center for Hospice Care is caring for 414 patients, and as the largest hospice provider in the state of Indiana, they will care for more than 2,000 patients this year.

“Next year, when we celebrate our 40th anniversary of patient care, we expect that at some point during the year the total number of patients we will have had the privilege of serving during our history will surpass 40,000,” Wargo said. “Since 1980, Center for Hospice Care has kept its promise that no one eligible for hospice services in our nine-county service area will be turned away due to their inability to pay.”

While there’s still a lot of work to be done on the detail and landscaping side of things, Wargo is excited to finally finish things up on the Mishawaka campus and get started on the next chapter in Roseland.

“I’ve been working on this for ten and a half years, so it feels really good to have this become what it is and finally be putting on the finishing touches,” Wargo said. “But now we’re turning our attention to our Roseland facility, which we’ve owned for 23 years, and we’re going to gut and remodel that building that will become the home of our Milton Adult Day Services.”

Seventy-five staff members just moved over from the seven-bed inpatient facility and offices in Roseland, so it won’t be long until construction is underway. Through their nine-county service area, Center for Hospice Care has 235 staff members and 500 volunteers, and it’s because of them that they are able to care for families so well.

One thing Wargo has come to notice is that no two hospice communities are alike. After researching a number of different care facilities, Wargo wanted to design something a little different when it came to the new Mishawaka campus.

“I’m most excited about the fact that families and their loved ones will be able to be in a very home-like setting that’s very comfortable and serene, and being along the water adds a lot to people’s mental wellbeing,” Wargo said. “Having them here and having them experience really great care in a setting that’s so unique and different is rewarding.”  For more information, go to www.FoundationForHospice.org