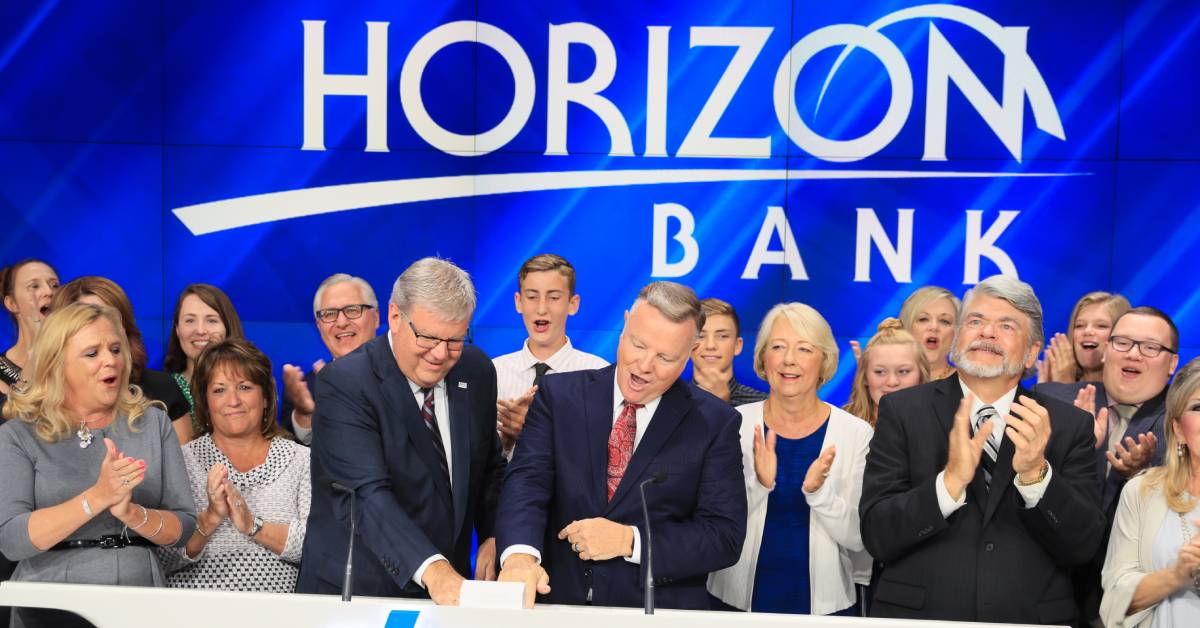 146 years. That’s how long Horizon Bank has been setting records, the latest of which is reaching $5 billion in assets. The first branch opened in 1873 in Michigan City under the name First National Bank. Now, 146 years later and with 76 locations throughout Indiana and Michigan, Horizon Bank is the largest bank headquartered in Indiana. For more than a century they have been in the business of valuing their customers and meeting their needs.

On Monday, Aug. 5, Horizon Bank celebrated on a national scale. Craig Dwight, Horizon Bank’s Chairman and CEO was invited to ring the NASDAQ opening bell. They were warmly welcomed by NASDAQ’s Charles Brown, AVP Market Intelligence Desk, and David Wicks, VP of Listings. Wicks praised Horizon Bank for their success over the last year and presented Dwight with the Opening Bell Crystal.

From working with the gas company to offer customers “quarter meters” decades ago, to installing high-security vaults while those notorious bank robbers were running through the Region in the roaring 20s, Horizon Bank has been a bank of firsts. In the late 1800s, they opened the first drive-up window for horse-drawn pay wagons. In 1955, they were the first bank in Indiana to offer drive-up services and walk-up service windows. In 1974, they were the first Indiana bank with an ATM. Such accomplishments deserve to be celebrated.

In December 2001, Horizon began trading on NASDAQ and on Monday, along with their long history, they celebrated a 12.63% compounded annual growth rate as well as their success in attaining $5 billion in total bank assets. It was a major milestone for the bank, who over the last 18 years has increased their shareholder return by 615%[1].

“We couldn’t be more proud of our partnership and helping you grow and be the engine of American capitalism,” Wicks said during the opening bell event.

Senior staff members joined Dwight on stage as they counted down to ring the bell. Dwight knows that such a long history and the ability to continue to grow was a team effort. Horizon banks’ growth can be attributed to the team’s hard work, including the local bankers whose knowledge and history of the area helped Horizon Bank continue to make important strides throughout the years.

“Horizon’s success is an outstanding team of experienced bankers that continue to look for new opportunities,” Dwight said. “Our ongoing success could not be accomplished without the hard work and creativity of our team.”

Another aspect of Horizon Bank’s continued success has been their mission for diversity and inclusion in their operations. They emphasize the importance of viewing customers and employees as a priority and as a whole person, focusing on their different needs. This has helped them become a top performing bank, gaining multiple awards and recognitions over the years.

“Our success is based on our core philosophy of people first, and treating everyone with respect, dignity, and fairness,” Dwight said.

To learn more about Horizon Bank and the quality products they offer, visit their website here: https://www.horizonbank.com/

You can watch the bell-ringing ceremony here: https://www.youtube.com/watch?v=d_Qmuq0DSoQ

Dwight was also interviewed by Nicole Petallides on The Watch List, which you can view here:

You can watch Dwight’s interview with CNBC “Closing Bell” here:https://www.youtube.com/watch?v=y5pe3hOvEJE&list=PLxn49uac2RGdZ_PV96pB8c9yEaJRNyTqM