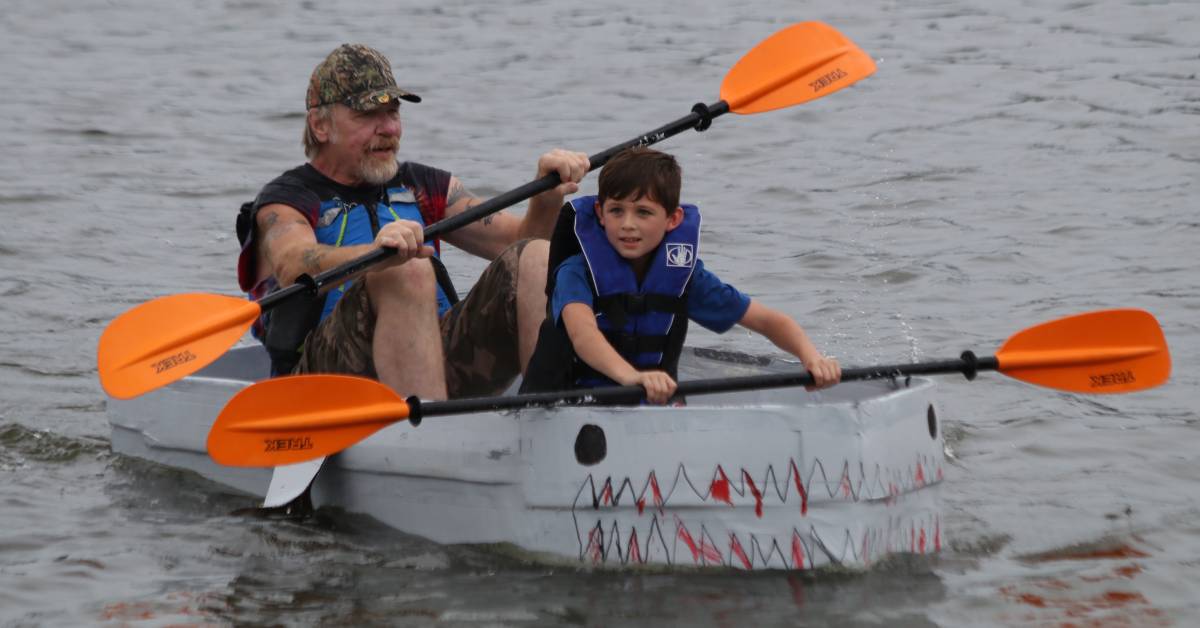 The 2019 Dam Duck Tape & Cardboard Regatta was held on Saturday, August 17th at Festival Park in Hobart. The event was a part of Hobart’s annual Lakefront Festival. Each contestant creates a homemade boat out of carboard and duct tape, races to the middle of Lake George, turns around, and paddles back.

Many came out to brave the rain and watch the competitors race for the title of champion. This year featured 3 carboard boats, “Da Boat”, “SS Lucas”, and “Troop 65”. The race began with a confetti canon and contestants were off. The race was tight until “Da Boat,” the Chicago Bears themed boat, took the lead and won. SS Lucas and Troop 65 came in 2ndand 3rd. There were also awards given to Most Creative, Best Overall, and The Titanic Award.

Last Year’s champion, “Corngetters,” were on a five-year win streak and decided to help out Troop 65 this year. The boat from “Corngetters” was operated by Troop 65.

Nikki Lopez is the Special Events coordinator for the City of Hobart. She helps put on the race every year and helps choose the award winners.

“We started this 9 years ago. The parks department started it and we continued it every year, because it is such a hit,” said Lopez. “Hopefully we get a few more boats next year. We average about 15 boats and I think the rain scared some boats off this year. This is one of our favorite events of the year and we want as many people as we can get to come out and enjoy the day with us.”

The competition was tough, and all teams put many weeks of preparation into their boat.

Second place finisher, “SS Lucas,” was constructed and operated by Steve Solomon, and his grandson Lucas Urena. This is the first year they have entered the competition but were in attendance at last year’s event.

“This is the first year we were in the contest, last year we saw it and decided to enter this year. We didn’t have enough time to build the boat and it took two weekends to make it. The fins on the boat fell off because the glue wasn’t dry,” joked Solomon.

“We just didn’t want to sink and fall in,” added Urena.

Michael Bates and John Holland were the champions of the event. Both have been coming for 5 years and have been runner up more than once.

“We were runner up last year, but it feels good that we won this year,” said Holland.

“We heard about the event from just living in Hobart, and decided to enter,” said Bates.

“We’ll be back next year too,” added Holland.

Be sure to check out the rest of the Lakefront Festival in Hobart and enter a boat into next year’s competition!