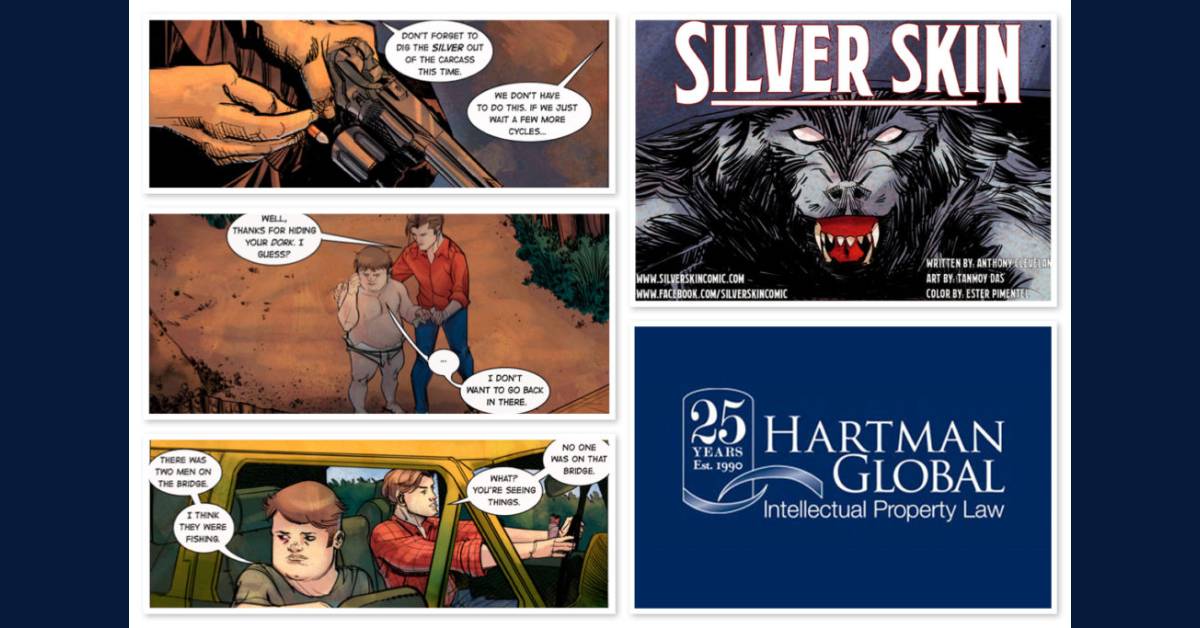 Creativity is everywhere and it can be an incredibly powerful trait. From artists and designers to writers and musicians, creativity brings the imaginary to life and drives a lot of what makes living entertaining and interesting.

Ideas in Motion Media’s own Anthony Cleveland is in the midst of harnessing his creativity in the form of a comic book titled ‘Silver Skin,’ and as he takes steps to share his creative works with the world, Cleveland is thinking more and more about the business side of creation.

Protecting his work has become an important topic for Cleveland, who has his eyes set on producing and distributing his comic books to a much wider audience. To learn more about how he can keep his work safe, Cleveland sat down with intellectual property expert, Domenica Hartman from Hartman Global Intellectual Property Law.

“Coming into this, there are definitely some things that I was worried about,” Cleveland said as we sat down to speak with Hartman.

Having his characters created as ‘works for hire’ is incredibly important as Cleveland needs to clearly establish, whether through correspondence or by contract, that the work to create these characters was paid for, and that he is the sole owner of them.

“You want to make sure they are somehow compensated,” Hartman added. “There needs to be some sort of outright payment or some kind of ownership share, but it needs to be very clearly laid out prior to them starting the work.”

When it comes to copyright, the creator of that created work, whether it’s text, graphics, or illustrations, is the one who owns that copyright unless there is some kind of agreement in place beforehand. For this reason, Hartman advised that using formal language to convey that the illustrator is assigning all intellectual property rights to the person commissioning the work is going to adequately protect Cleveland’s work.

“It’s a very simple sentence that acknowledges who, in this case Anthony Cleveland, will own all of the IP rights associated with that assignment,” said Hartman.

Once the comic is published, and publication requires a low threshold, Cleveland will have state and common law protection in the work. However, it’s not always easy to enforce. If someone copied and published something similar to Cleveland’s ‘Silver Skin,’ there’s the potential for the back and forth, ‘he said, she said,’ type of process playing out where damages and intent have to be proven with no guarantee of protection in the end for Cleveland.

“Federal copyright protection through the Library of Congress is a very simple, inexpensive process,” Hartman advised. “You can file and upload the comic book there, and if it’s a series, you’re looking at around a $75 filing fee. Now, you have federal copyright protection and you don’t have to prove damages or intent on the part of whomever might be using your creation for their own gain.”

Mickey Mouse or Hello Kitty, the most recognizable characters in the world, are extremely protected from use by people and companies looking to profit off of their brand recognition. Having limited resources as a self-publisher, Hartman advised Cleveland to prioritize the protection of the star characters of his series.

“It’s very important to protect your star characters,” noted Hartman. “The storyline is hard to protect but it’s really about two things - the main characters and it’s the trademark and branding.”

“If you’re going to be branding under Silver Skin you probably want to protect that as well. Basic word mark is going to protect ‘Silver Skin’ in any font. The thing you want to avoid is a similar mark. Then we can file for ‘Silver Skin’ in a particular font. When you pick that trademark and whatever you use to brand your comic books, because ultimately you might want merchandise as well, as you move forward you have to be consistent with the font and the image so people recognize it immediately.”

With how we now immediately recognize brands and the images associated with them, that branding, and staying consistent after it’s finalized, plays a much greater role in developing a creation like, for Cleveland, ‘Silver Skin.’ Before obtaining registered protection, Cleveland will be able to use the trademark logo. Once it’s finished and federal protection has been obtained, however, Cleveland will be free to use the registered trademark logo which carries with it the weight of being protected to a much higher degree.

For Cleveland, meeting with an intellectual property expert like Hartman has had a tremendous impact on the future of his comic book creative ventures.

“I have a little familiarity with copyright law,” he said. “There was a course or two I took in school and I know tons of horror stories where copyrights weren’t filed properly. That’s scarier to me than anything I have put to the page. It was just great to speak with Domenica about these questions that I had been afraid to ask for a long time. I admired her passion for her clients and her patience to answer any question I have. I really don’t know where to begin with how grateful I am for the hour she shared with me.”

Cleveland summed up his meeting with Hartman saying, “Every content creator needs someone like her in your corner. This stuff can be extremely tricky and every detail matters. I’m absolutely starting here first before beginning my next comic.”

To find out more about ‘Silver Skin’ and Cleveland’s work, go to: www.silverskincomic.com/, or visit his Facebook page at: www.facebook.com/silverskincomic/

If you’re interested in sharing your creativity with the world, and want to keep your work protected, visit: www.hartmanglobal-ip.com/