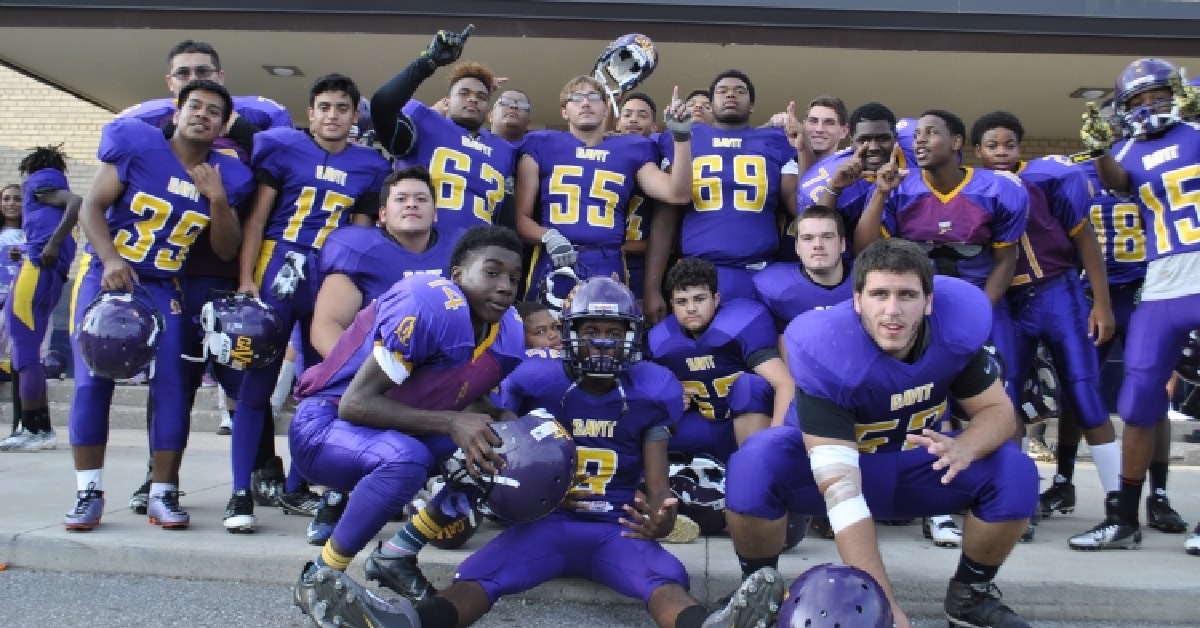 The School City of Hammond’s September 15 board of education meeting agenda did not include a motion to reinstate fall contact sports. But when students from Hammond, Hammond Gavit, and Hammond Morton High Schools showed up holding homemade signs and bringing a hopeful energy into the room, they filled the front rows and pleaded their case – a case for an escape, for school pride, and for a shared passion for their teams.

“It was emotional, watching these students speak up for their teams,” said Hammond Gavit Head Football Coach Dave “DJ” Silvas. “I was so proud of my boys for handling this difficult situation with such passion and heart.”

The School City of Hammond had originally voted on August 4 to cancel all fall contact sports effective immediately due to the coronavirus pandemic, which was a difficult decision to make as students were preparing to go back to in-person learning without the escape that sports offered. Yet, one day after Calumet voted to bring fall sports back, Hammond students knew it was their time.

“We got as many people together from around the city as we could, and I told everyone to bring homemade signs and sit right in the front rows,” said Augustine Vargas, Jr., Hammond Gavit senior linebaker and tight end. “All the board members could see our signs, see how dedicated we were.”

For Vargas and his team, that dedication was a little more bittersweet. Last November, the school district voted to close Hammond Gavit following the 2020-21 school year to avoid a private company takeover approved by the state, similar to the school districts in Muncie and Gary. With the school closing and a sudden culture shift because of COVID-19 affecting students’ everyday lives, students at Hammond Gavit hoped for a return of some normalcy to enjoy their favorite activities while they could.

Then stepped up Vargas.

“I didn’t plan on speaking that night, but something told me I had to,” said Vargas, Jr. “So, I wrote a small speech down and said what I needed to say. I gave it my all.”

“I got a text from the athletic director from Hammond Clark saying, ‘Hey, your players are at the school board meeting trying get sports reinstated. They’re voting now!’” said Doug Friend, Athletic Director at Hammond Gavit. “It was a huge surprise, but we couldn’t be prouder of our team for fighting for the chance to play.”

Already a couple months behind other schools in the Region, many of whom have been playing since the start of the school year in August, Hammond Gavit and the other Hammond high schools opted to play each other. Now with only three regular season games under their belt, Hammond Gavit prepares to play the state-ranked Hobart Football Team Friday night in their first sectional game.

“We’re definitely the underdogs,” Silvas said. “Hobart is definitely one of the tougher draws we could have gotten for our first sectional match. But we’re feeling good about it; we have a good strategy in place.”

Hammond Gavit’s long history of football, going back to the early 1960’s, shows a reliable and strong defense, and this year, a lightning-fast running back. Friend, whose father was the long-time head coach of the Munster High School Football Team, tagged along with his father on game days and remembers the distinct rivalry between the two powerhouse schools.

“Gavit has always had a strong team,” Friend said. “I was just a toddler, but I remember coming to the games and how exciting it was to have that rivalry between Munster and Gavit. Both schools would take turns painting the bridge that’s on Northcote, something Munster now does with Highland. But that’s a very vivid memory I have, and one thing that has never changed is that Gavit has always been traditionally strong.”

Friend was the defensive coordinator for Hammond Clark, then the head coach for Highland before coming to Hammond Gavit. The Region native remembers the tough games between his team and Gavit’s back in the day, the product of a strong and legendary coach.

“Back then, Bill Melby was the head coach at Gavit, and our games never failed to be incredibly competitive,” Friend said. “Back in the ‘90’s and 2000’s, Gavit was at the top and continues to be a team with heart.”

As Gavit prepares for Friday night’s game against Hobart, they’re wearing their hearts on their uniforms.

“It’s bittersweet, to say the least,” Silvas said. “This may be our last game, this may be Gavit’s last football game ever. But knowing that, while it’s incredibly sad to think, just motivates us and pushes us more.”

Silvas is a Gavit alumnus. Now in his second year as head coach, he looks back at his history with the school and the team as the honor of his life.

“It’s been emotional for me, for all of us,” he said. “To be able to say that I’m Gavit’s last head coach, to have been part of this community for most of my life, means so much to me.”

A David and Goliath story in the making, Silvas wants his team to play the very best football they can.

“We’re definitely the underdogs,” Silvas said. “I just want the kids to treat this like any other game and play the very best game they can. We’ll see what the scoreboard says at the end.”

“We’re the last Gavit football team and Friday could be our last game,” Vargas said. “It’s definitely not the way we thought it would end, and this season hasn’t gone the way we had hoped, only playing three games and all, but that just motivates us to close out the school with a bang and make this season memorable.”

Vargas has been playing football since he was six years old, thanks to his father who encouraged him to play the game. To this day, while he loves the game and hopes to continue his football career, his dad remains his inspiration and main motivation.

“I definitely play for myself,” Vargas said, “but my main motivation is the people who have always supported me: my family, especially my father. He is the one who got me into the sport, and he has always pushed me and cheered me on. I play for him, and I play for others who have always motivated me.”

Gavit is ready to face Hobart Friday night at 6:30 p.m. on their home field, one of the last games to be played at Hammond Gavit High School. But with the team’s long history and a proud community on their minds, the Hammond Gavit Gladiators have already been written into the history books.