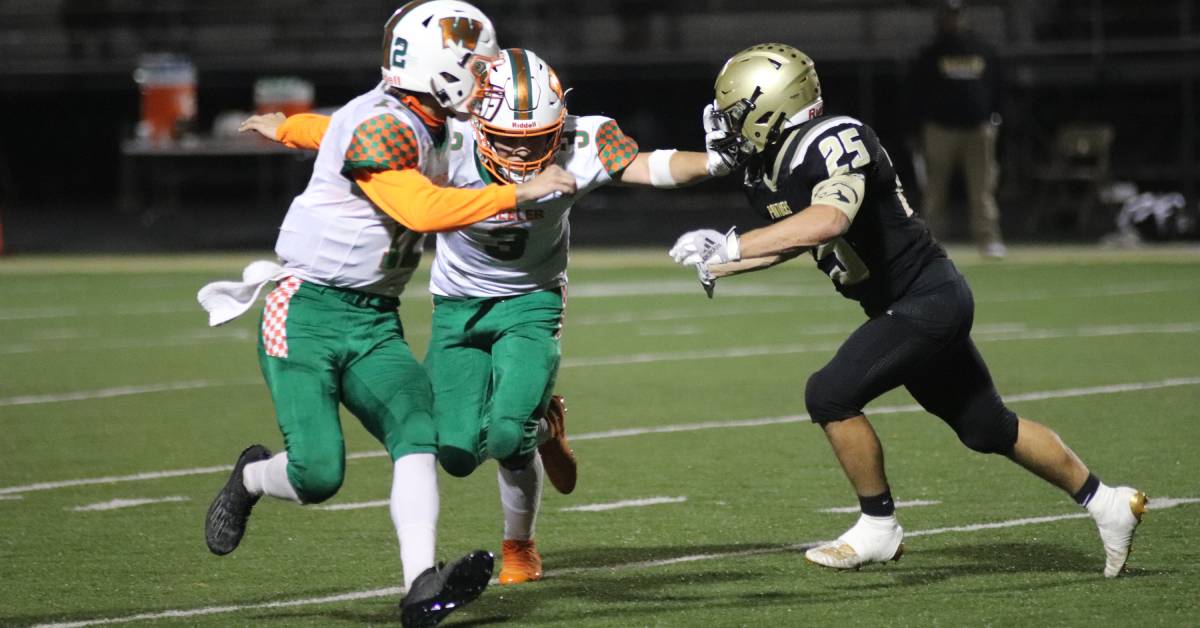 This fall COVID-19 has transformed sports, redefining everything we thought we knew about athletics. Where a once long-awaited game schedule would normally be listed now stood a giant question mark, and many teams wondered if they would even have a season at all. Now, as carefully planned games take place, coaches and players take the field each Friday with a new mentality, one they never planned for: that playing during a global pandemic means playing every game like it’s the last—because it very well could be.

“We talk every week about how it could all be shut down at any moment and to not take anything for granted,” said Robert Robinson, head football coach for the Griffith Panthers, who took on the Wheeler Bearcats under the Friday night lights this week. “Other schools have had to stop playing for two weeks and have postponed games due to the virus and that can happen to any school at any time. I think my kids have accepted that reality and have just approached the season one day at a time.”

“Every week I’ve preached ‘this could be your last game, so let’s give it everything we’ve got’ to my athletes,” Hudak said. “We just had our JV team get quarantined today based on a game from last week. We’ve only got about 24 athletes here, so tonight proves how unpredictable this season really is.”

While the teams had no way to prepare for the pandemic itself, they certainly found ways to control how they react and adapt to it.

“We make sure that we are wearing masks at all times when we are not actively practicing and we disinfect all equipment used after every practice. All the footballs, helmets, shoulder pads, blocking dummies and clothing are either sprayed with a strong disinfectant that kills the virus or washed in water and detergent at a temperature of at least 180 degrees after each use,” Robinson said. “We also social distance as much as possible when players are practicing. It is more time consuming for the coaches but the safety of our players and assistant coaches comes first.”

“It hasn’t really changed anything for us at the core,” said Richard Otero, wing for the Bearcats. “We do what we can to take extra caution, wearing extra gear and being disciplined about social distancing, but that fight and will to win is still there.”

In a time when they have every reason to feel defeated and unsure, the Panthers have embraced the challenges of the pandemic with open arms. Rather than focusing on what they may not have tomorrow, they take what they have today and move forward.

“When we had someone in quarantine, we didn’t use it as an excuse to complain, the team just stepped up and someone else handled the job until the other player could come back,” Robinson said. “I think it has made us closer as a team and brought everyone into the fold. We truly have become a small family outside of our regular families and I couldn’t be more proud of them.”

This season has proven especially tough on seniors, who, already in a bittersweet place in their high school career, are now faced with the unprecedented hardship of not knowing when they will put on the uniform for the last time.

“It’s definitely added stress for the seniors, not knowing when it could end,” Hudak said. “You don’t know if you’re going to miss next week or survive to play another game. We just heard that boys soccer team can’t play in regionals tomorrow. You look at that and think you could be in that same position a week from now. It’s just heartbreaking.”

Otero said this lingering uncertainty made the team all the more hungry to pull off the win for their senior squad members.

“It just makes us want to play harder and get that win for our seniors,” Otero said. “Since we never know what could happen, we want to make sure we get that win for them the last time we take the field with them.”

And win they did. The Bearcats led the game from the first quarter, holding that lead through all four quarters to take home the win 52-17, a victory made all the more sweet by everything they overcame to get there.

“This is week nine of our season, and we’ve been fortunate to be able to play all nine games,” Hudak said. “We’ve been doing the right things – keeping any kids who might not be feeling well at home, social distancing, wearing the right gear – and those efforts have allowed us to play nine weeks in a row. Not every team gets that opportunity, and we are very grateful.”