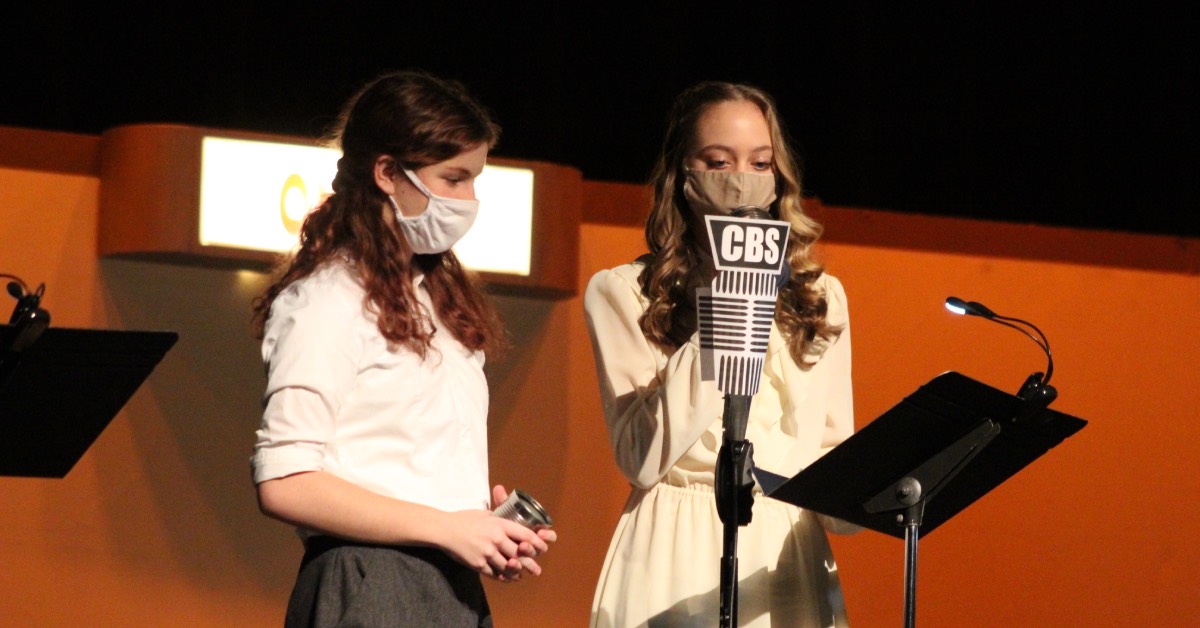 The Griffith High School Theatre Company acted out a virtual performance of Orson Welles’ Radio adaptation of H.G. Wells’ The War of The Worlds, along with Tracks by Peter Tarsi on Saturday night. To stay in-line with COVID-19 safety precautions, the drama club chose to live stream the performance to audience members at home.

“When some of our kids became quarantined, we had to shift our rehearsal schedule and push everything back,” said Director Jenna Parker. “We didn’t think it would be responsible to bring in an audience.”

Although the show was virtual, it did not come without its challenges. As COVID-19 cases continued to rise, and many people were quarantined, the troupe found it increasingly difficult to prepare for opening night.

“When a lot of kids got quarantined, we had to shut down for almost a month, and that definitely broke the spirits a bit,” said Senior Kyle Rassel, who played Orson Welles and Richard Pierson in The War of the Worlds and Old Man in Tracks. “But when we came back, it really motivated us.”

That motivation paid off and earned the students the chance to put all their work on display - even if the format was different than usual.

“The live streaming situation is not my favorite thing, but I’m still glad that my family can watch,” said Junior Abby Morrison, who played the Stranger in The War of the Worlds and Homeless Girl in Tracks. “I'm glad that it’s this rather than not having a show at all. I still like the live part, but part of the rush, the adrenaline, the enjoyment of it is seeing your family out there. The social aspect is really lost, but I do still like being on stage.”

Rassel expressed a similar sentiment to his fellow actor about how even virtually, performing for a live audience is a rewarding experience.

“When you do a show live and there are people there in the audience, you can definitely feel the energy,” said Rassel. “Even when we recorded it a couple days ago, it felt different.”

Throughout the many hurdles that the drama club faced during the process, the actors still found ways to bond and enjoy the process.

“With the people that you are with, you’re there for a long time waiting for things, like temperature checks,” said Rassel. “I think I’ve gotten to know my boys more than usual.”

The Griffith High School Theatre Company will host a final performance of The War of the Worlds and Tracks at 3 p.m. tomorrow (Sunday, December 6), which can be viewed on their website atwww.griffiththeatrecompany.com.