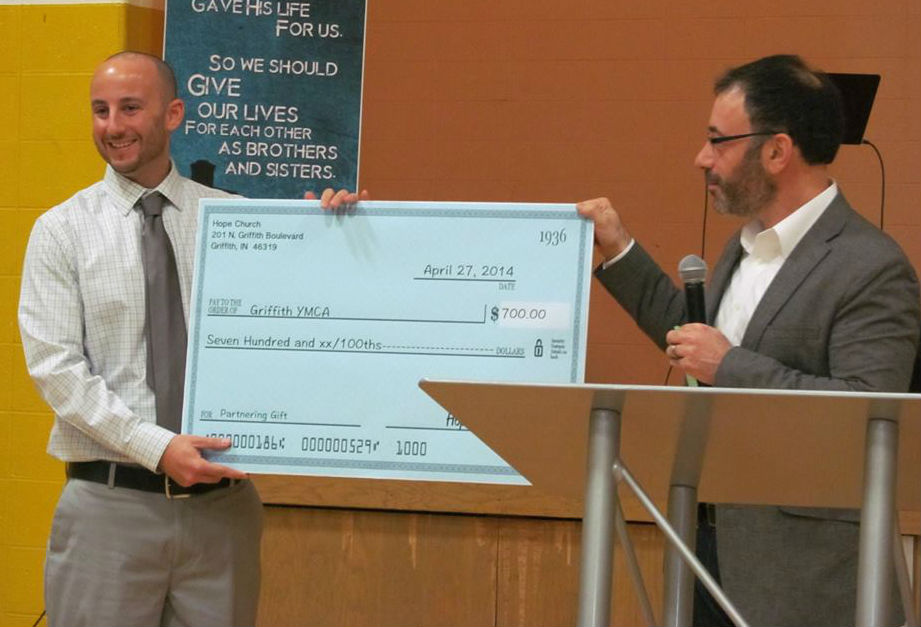 The Griffith Family YMCA received a donation of $700 from Hope Church in appreciation for hosting their weekly services and providing support for their mission during the church’s one-year anniversary celebration on April 27.

“We love being at the Y,” said Hope Church Pastor Todd Cosenza. “They have a fantastic staff and we love their outreach in the community and having been able to partner with them on a number of things has been great. (The donation) is our way to say thank you to them and to reaffirm our commitment to continue to partner with them because we believe in the YMCA’s mission.”

Since Hope Church began in Griffith, they have volunteered to staff the YMCA’s 5K run that is held yearly to benefit those who cannot afford membership to the Y; built a nursery facility at the Y; offered financial classes for the community and held a Halloween outreach event, where they helped promote the YMCA to families while also handing out candy and hot chocolate.

Hope Church, one of four churches under the Lifelink Chicago network (which is under the global network, Global Horizons), holds weekly services at the YMCA.

“We felt called to begin another church in Northwest Indiana and already had members in the Griffith area,” said Cosenza, who noted the other locations of churches under Lifelink Chicago are in Munster, Crown Point and Lansing, Illinois.

“We are a network that believes in planting churches, and will possibly plant another in the St. John area,” he added.

Cosenza praised Griffith YMCA Director Carl Zurbriggen for being “a good friend of the church.”

“They support us, and we like to support them,” Cosenza said. “We really do believe in the mission of the YMCA and are happy to be part of what they are doing.”

The first service at Hope Church took place on April 14, 2013 at the Griffith YMCA, and Cosenza says that while their membership has grown since they planted the Griffith church, they plan on continuing to hold services there.

Cosenza lives in Munster with wife, Susan and two children.