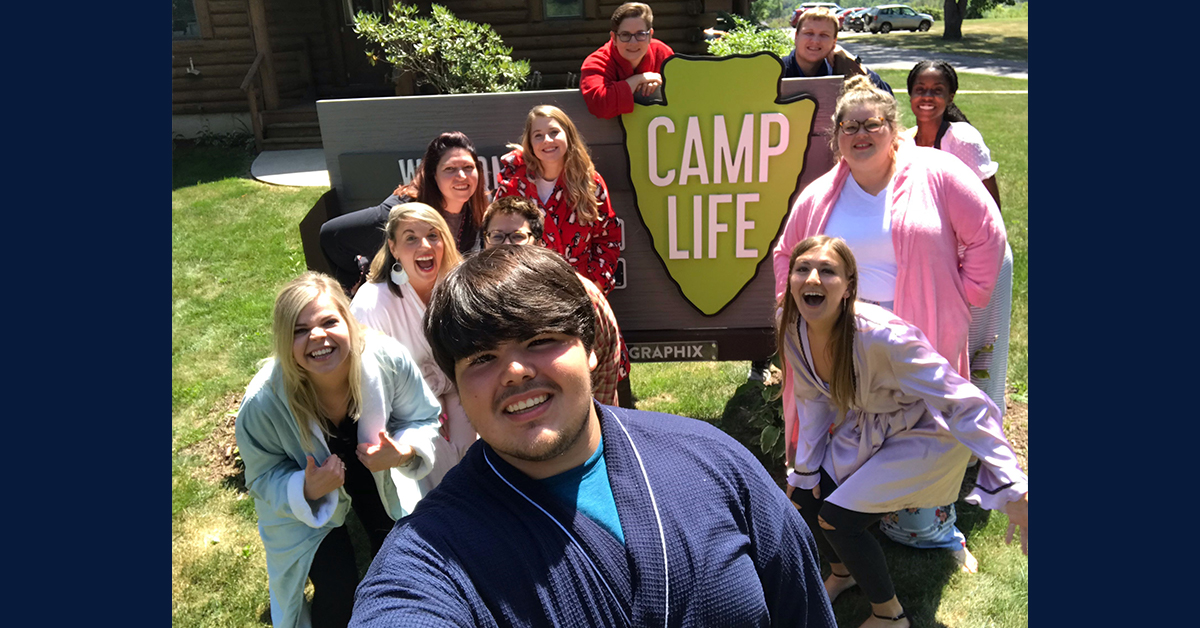 In today’s age of viral sensationalism, it takes a true spark of authenticity to get noticed. Anyone can capture a moment of hilarity or emotion and hope that it resonates with a wider audience, but finding that special something that people far and wide respond to has become quite a feat.

When Portage High School Senior Evan Dennison tossed his bathrobe in his backpack just before heading out to a shoot for his Senior photos, he wasn’t thinking this far ahead. When he got to his location and thought, “You know what? Let’s go for it,” throwing on his robe despite his photographer’s protests, he wasn’t anticipating the stir he’d cause. And now that the photos have achieved the highest heights of viral attention—from thousands of shares across social media platforms to exposure on national broadcasts such as Good Morning America, The Late Show with Stephen Colbert, and The Today Show—Dennison is still taking it all in stride.

“I don’t really like to plan things ahead of time,” he said. “I like to keep things real. I feel more authentic when I’m doing things in the spur of the moment.”

Perhaps it’s this quality that makes the photos such a hit, silly attire and breaking of formality aside. The brilliant way Dennison models, with poses that range from stoic to pensive to downright ridiculous, makes for a great way to poke fun at the whole tradition of Senior photos. But the shoot also suggests that Dennison himself is someone who doesn’t take life too seriously, and isn’t dwelling anything beyond this moment, now. We think that enjoyment is contagious.

“I think people are responding to the lightheartedness and fun of the photos,” Dennison said. “You see so many bad things in the news, and life in general gets stressful, but this is just fun, something to laugh at and enjoy.”

Dennison takes life on the pulse. He’s remained pretty level headed in his overnight fame, though he admits he’s excited to see where it takes him. He was fishing with his buddies when he got the call asking him to appear on Good Morning America—the first and only time his nerves had an affect.

“I think I just put my pole down and stopped fishing and started prepping in my head,” he said. “All I know is, I didn’t catch a single fish that day.”

Now, Dennison is ready for whatever life throws at him and his bathrobe, which is along for the ride, of course. Be it guest spots on television or dinner with family, the robe is never far behind. On a recent trip to Tennessee, he took a wrong turn on a hike and ended up scaling bluffs in his robe. After an adventure like that, you better believe that Dennison and this robe are a team.

Much like his improvisational take on life, Dennison’s thoughts on the photoshoot and its success reflect his values.

“You know, those pictures were just my way of creating memories of high school for my friends and I,” he said. “I wanted us to have something to look back on and laugh at, and I had been joking about it. And I decided to just go for it. I’m happy people enjoy them as much as we do.”

“I don’t really have a plan,” Dennison said, matter-of-fact and true to form. “I’m going to take the SATs this year, look into schools, and just enjoy my Senior year with my friends. I’ve done everything I’ve wanted to do with my high school career so far, and whatever happens next—I’m ready for it. I’ll take it.”

Keep Dennison on your radar, and be sure to catch more of his signature style in our video.