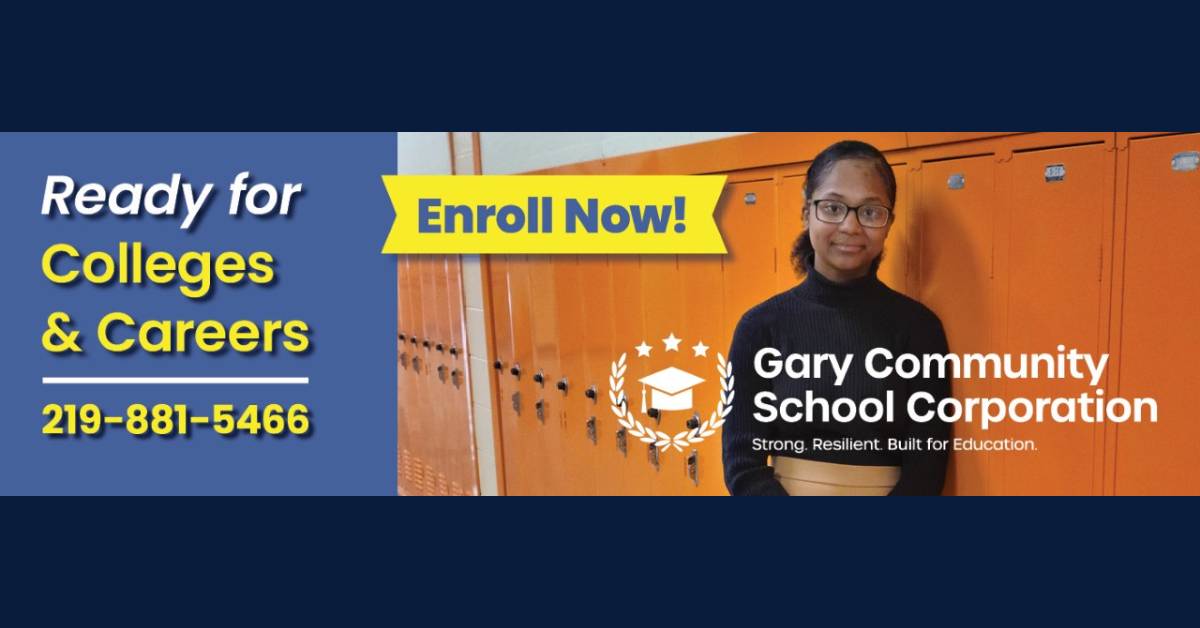 The Gary Community School Corporation (GCSC) today kicked off its 2021-22 enrollment campaign by releasing a series of promotional materials that celebrate its students’ successes.

The campaign comes as GCSC’s enrollment is increasing for the first time in a decade. Earlier this month, the district announced that it was serving 65 more students at the time of the state’s February count than it was during the state’s September count. This increase represents continued progress; the September count marked the first time in more than 10 years when Gary’s enrollment count (as measured by Average Daily Membership) had increased.

“We are excited to kick off enrollment for 2021-22 and welcome even more new students and families to the Gary Community School Corporation,” said Dr. Paige McNulty, GCSC’s manager. “Our current students are demonstrating success academically, athletically, and artistically, and we are proud to share their accomplishments with the broader Gary community.”

The campaign will share three main reasons why families should enroll their students in GCSC:

Academics: GCSC students valuable hands-on experience that helps prepare them for careers. Students as early as 8th-grade can enroll in the growing number of career & technical education pathways, including aviation, police, fire, EMT, and nursing at the Gary Area Career Center. GCSC also offers free pre-school to all Gary residents starting at 3-years-old, and all K-12 students who enroll in the Gary Community School Corporation are eligible to receive a Chromebook and an internet hotspot.

Athletics: GCSC students have more sports opportunities than any charter school in Gary: baseball, basketball, football, cheerleading, cross country, track, and swimming. GCSC also offers middle school sports and unified sports for students with special needs. Plus, the district is overhauling the track at West Side Leadership Academy, which will allow the school to once again host track meets and help restore the glory to its legendary track program. In addition, strong support from local leaders will help GCSC student-athletes and marching band members receive new uniforms for upcoming seasons.

Arts: GCSC students can participate in the West Side Guild, a world-class performing arts program that prepares students for careers in music, dance, drama, and stage production. West Side Leadership Academy also offers students the largest theater in the region, with 2,000 seats and state-of-the-art stage and sound equipment to support students in putting on professional-grade productions. Last but not least, the Gary Community School Corporation operates an FM radio station, WGVE, where students have the opportunity to gain valuable broadcast journalism experience by training in a professional Radio/TV studio.

The 2021-22 enrollment campaign, which comes months earlier than efforts in recent years, will feature current GCSC students as well as alumni. Among the students will be Cammay Brown, a senior at West Side Leadership Academy who was named a 2021 Lilly Scholar, earning free college tuition, required fees, and a book stipend for four years. The West Side Boys Varsity Basketball team, which recently earned a spot in the semi-state basketball tournament, will also be highlighted.

Over the coming weeks and months, many Gary residents will receive mailers and see billboards and other materials providing information about how to enroll in GCSC:As the district transitions to a new student management system, families of current GCSC students will be asked to re-register starting July 1.

Families of students who would be new to GCSC for the 2021-22 school year can currently go to garyschools.org/registration or call 219-881-5466 to complete the enrollment process.

The launch of the 2021-22 enrollment campaign comes as GCSC is making progress on many fronts. The district recently announced that its annual deficit, which hit $22 million in August 2017, is now under $2 million.

Additionally, in November voters approved an operating referendum for the schools with more than 60 percent of the vote, leading to more funding for student support as well as the first raise for teachers in more than 10 years. GCSC is also modernizing its school buildings through a $25 million School Improvement Fund.

Even more, GCSC has adopted local preference policies for hiring and purchasing and distributed a Chromebook with internet access to every student K-12.