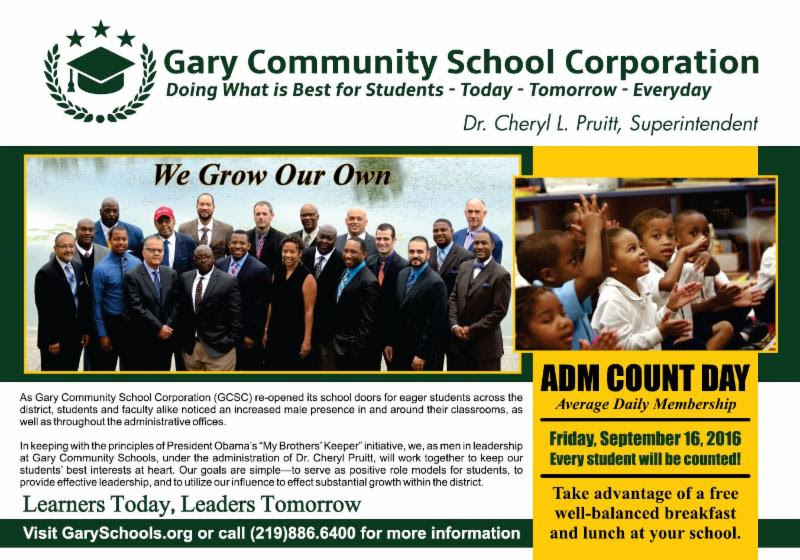 In keeping with the principles of President Obama's "My Brothers' Keeper" initiative, the men in leadership at GCSC, under the administration of Dr. Cheryl Pruitt, will work together to keep the students' best interests at heart. Their goals are simple-to serve as positive role models for the students, to provide effective leadership, and to utilize their influence to effect substantial growth within the district.

New to the district are Mr. Maceo Rainey, who now serves as Principal at Watson Academy for Boys, and Mr. Andrew Fentress, the new Assistant Principal at Beveridge. Also new to Gary Community Schools is Mr. Gershon Jackson, Principal of New Tech Innovative Institute at Gary Area Career Center, who also heads the music production program at the Career Center.

Mr.Terrance Little remains Principal of West Side Leadership Academy; Mr. Eric McMahon andMr. Marcus Upshaw-Muhammad both serve as Assistant Principals at West Side. Mr. Jason Johnson, former NFL player, coaches football at Westside Leadership Academy and also serves as its Restorative Justice Liaison; Mr. Kevin Higgins is a Case Manager on the district's Educational Assessment team at West Side, and Mr. Edmund Fraire is the Principal of Lincoln Achievement, a special services center, which is located inside of West Side.

Enhancing the creative space within the district are Mr. Stephan Wanger runs the Bead Town art program at Gary Area Career Center, Mr. Mark Spencer, Director of Arts and Theatre, and Mr. Larry Brewer, who serves as Arts Coordinator at Wirt-Emerson Visual and Performing Arts High Ability Academy, and Mr. Damion Miller, whose recently took on a role at Wirt-Emerson as Dean/Interventionist. Mr. Benjamin Ingram continues to serve as Assistant Principal at Wirt-Emerson.

In other departments there are also several men in key roles, including new arrival to Gary Community Schools, Mr. Ronald Gordon, who recently became the Supervisor of Material Supplies and Corporation Assets. Also on board is Mr. Erick Reese, who previously worked at the Gary Area Career Center and now works as a teacher in the testing department of Curriculum, Instruction and Assessment at New Tech Innovative Institute.Mr. David Mekhiel is the Assistant Director of Special Education, and Mr. Dwight Pointer is the Transformation Specialist of Climate/Culture at Jefferson Elementary. Mr. Robert Campbell is Board Member for the 2nd District.

Dr. Pruitt stated that the male presence is an asset within Gary Community Schools. She recognizes that men offer unique influences and as part of her ongoing strategy to continually improve the district, she is addressing students' need for a well-rounded balance between male and female influences in their educational experience. It is important for students to experience being under the leadership of men and women equally as they transition from being learners to becoming leaders themselves.