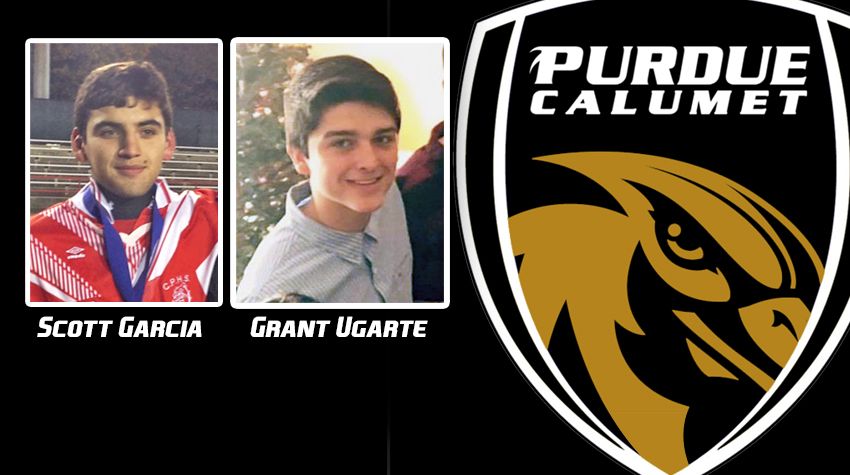 “I’m looking forward to working with Scott and Grant and having them assist the squad build on our success from last year,” Hayes said.

Both join a Peregrines team that had its best season to date in 2015, as Purdue Calumet finished with a 12-5-2 overall record and qualified for the NAIA National Tournament for the first time in program history.

Scott Garcia
Crown Point, Ind. - Crown Point
Garcia was a member of the Bulldog squad who won the State Championship in 2011, along with winning multiple DAC sectional championships.

“Scott has the ability to play multiple positions and is good on the ball, he can shoot well and is determined when defending," Hayes mentioned.

He received all-conference accolades and received the Defensive MVP and Bulldog award.

The son of Jesus and Maria Garcia, Scott plans to major in Psychology next fall.

Grant Ugarte
Bolingbrook, Ill. - Oak Lawn Community
Ugarte was a part of the Chicago Magic PSG academy, which won the U17 national championship in the summer of 2015.

“Grant is a powerful defender who has a very strong presence, he is a technical defender who reads the game very well,” said Hayes.

Ugarte played an integral role in the Magic’s success, netting the game-tying goal in the Regional Championship round which boosted their momentum to come away with the win.

Grant is also a part of the Chicago Fire Academy setup.

The son of Jim and Dorothy Ugarte, Grant was also an Illinois State Scholar and a member of the National Honor Society.

"Auburn is a force to be reckoned with," Wiejak said of Dodd. "She is athletic, strong and quick and can make a impact on offense and defense. She is also an amazing teammate who always looks to pick up others around her and motivates people to be their best.

"I am so excited to see the impact she will make on our team and our school."

Dodd led the Eagles to a 17-4 record, including a perfect 15-0 mark in conference play during her senior season.

During her junior campaign, Auburn received the Most Improved Award from her team.

Dodd is also very involved in the community, where she has participated in multiple Feed the Hungry events and the annual Brooks Day of Service day where she helps the Roseland community.

The daughter of Sophia Dodd, Auburn plans to major in psychology next fall.