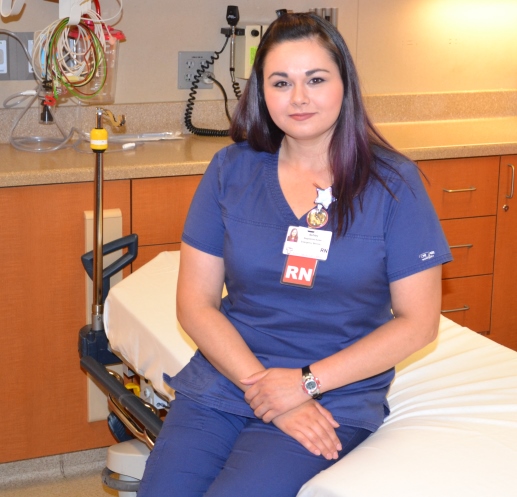 Ashley Smithey believes in helping others before helping herself.

“My mom always pushed that philosophy,” said the two-year Emergency Department registered nurse at Franciscan Health Hammond. Smithey also is a former emergency medical services responder, who uses all of her personal time off volunteering with Munster-based Hearts in Motion to bring medical care, supplies, relief and cheer to impoverished people in villages of Guatemala.

This summer marked the third trip since 2013 to the third-world country for the 31-year-old Valparaiso resident.

“I enjoy caring for people, doing humanitarian work and being around the community, which I see as the entire world, not just the region,” said Smithey, adding she was “raised in the medical field” by her family, all of whom are in health care.

Smithey began as an EMT with Prompt Ambulance Service in 2006 and worked there while pursuing a nursing degree at University of St. Francis in Crown Point. She graduated in 2014 and began with the Hammond hospital in 2015. It was during here time at Prompt, in 2013, when she was offered the chance to go to Guatemala.

On the 10-day trips, large groups of volunteers assist in makeshift clinics near the basecamp in Zacapa, one of the country’s poorest villages. Doctors and nurses assess villagers, who often travel for days to get there, and provide donated medications and can perform medical interventions and/or minor surgeries. People in need of major surgeries or extensive therapies can be taken to the U.S. and treated, free of charge to the patient, with the help and donations to the Hearts In Motion organization.

Besides health care, Hearts in Motion volunteers bring supplies and equipment for sports, music, construction and fire and EMS training, as well as visit and provide for the orphanage and nutrition center that is sponsored by the Hearts in Motion organization. Church groups that come on the trips pray, supply toys and play with the children.

“I also work alongside American firefighters/medics to educate Guatemalan fire and EMS professionals on simple training methods and utilizing the limited resources they have available to them. Hearts in Motion also provides a training course called Babies Breathing Easy, which is a neonatal resuscitation class that has been tailored for third-world countries. It is an opportunity for elders who run the villages to be trained in child birth and earn certificates upon course completion. They also receive equipment for their areas. This class has helped decrease the mortality rate for newborns,” Smithey said.

She also assists people in a small area commonly called, “the dump,” where residents have fashioned homes from trash and live, and die, without amenities.

“Some homes are made out of garbage there. Others are ranch-style. But there is no air conditioning or running water. Some have stone showers outside. Some have outhouses; others just dig holes in the ground. Some have toilets, but they can’t be flushed because the piping is primitive.”

“They get diarrhea from the water that is filled with bugs and viruses. The one thing they need is the thing that is killing them, water,” Smithey said, adding residents are too poor to afford purified water that is often sold by drug lords.

Although the days are long, uncomfortably warm, and there is no access to hot water for the volunteers, who stay in compounds, Smithey plans to continue returning every year.

“I am thankful for the opportunity. It’s awesome when strangers come together and create something beautiful like this. We’ve become like family. It’s hard to leave; you build bonds with them and the villagers. Part of my heart is there,” Smithey said.