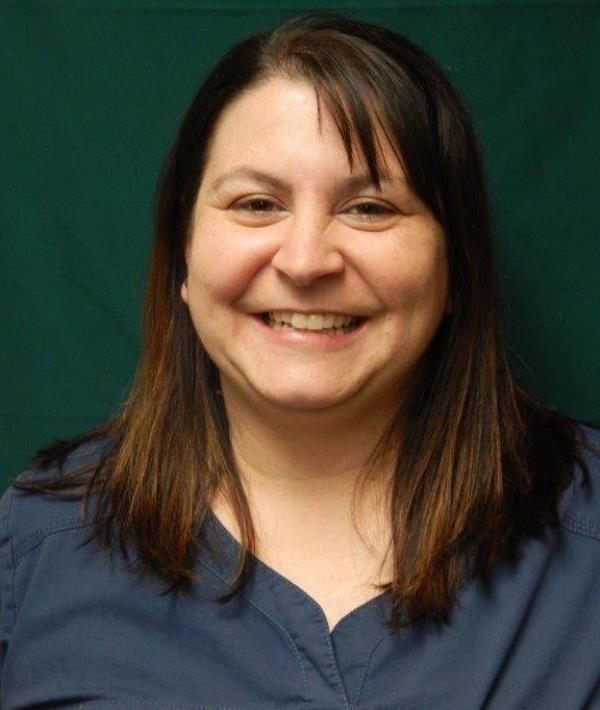 Jessica Tharpe, a nurse who has been with Franciscan Health Michigan City for 16 years on the medical-surgical-oncology unit, is the first winner of the hospital’s new, monthly DAISY Award for Extraordinary Nurses.

During a recent celebration, Trish Weber, hospital vice president of operations and chief nursing officer; along with Dean Mazzoni, president and CEO; presented the honor before department staff members, the DAISY Committee and other managers.

Tharpe, of LaPorte, was nominated by a patient who stated, “This nurse was awesome and very kind. She went above and beyond to make me comfortable with my stay on the third floor.

“Jessica also helped me dress and undress for my showers, always checking on me to see if I was OK. This young lady deserves to be recognized because she is one of a kind -- you have to have patience and compassion for people. She deserves this award, in my book.”

As part of the recognition, Jessica received a DAISY award pin, The Healer’s Touch sculpture, a DAISY Award certificate, a gift bag from the DAISY Foundation (which included a special rate on certification or recertification from the American Nurses Credentialing Center), and discounted tuition from Chamberlain College of Nursing, along with a box of Cinnabon cinnamon rolls to share with her co-workers. She will also have her photo posted on the “DAISY Wall” near the main floor lobby, along with the other winners as they are named.

The DAISY Award for Extraordinary Nurses is an internationally recognized award that was established in 1999 via the DAISY Foundation by members of the family of Patrick Barnes. DAISY is an acronym for Diseases Attacking the Immune System.

Barnes was a 33-year-old husband and father of an infant daughter. He died eight weeks after being diagnosed with the autoimmune disease, idiopathic thrombocytopenia.

The award was established to honor what his family perceived to be extraordinary kindness and compassion by the nurses who cared for him.

Award winners receive Cinnabon pastry because when Patrick had lost his appetite, at one point he was able to eat a Cinnabon his father had brought in for himself. Patrick requested that Cinnabon be brought in the next day not just for him, but for all the nurses, to thank them for their care.

More information about the award is available at: https://www.daisyfoundation.org/