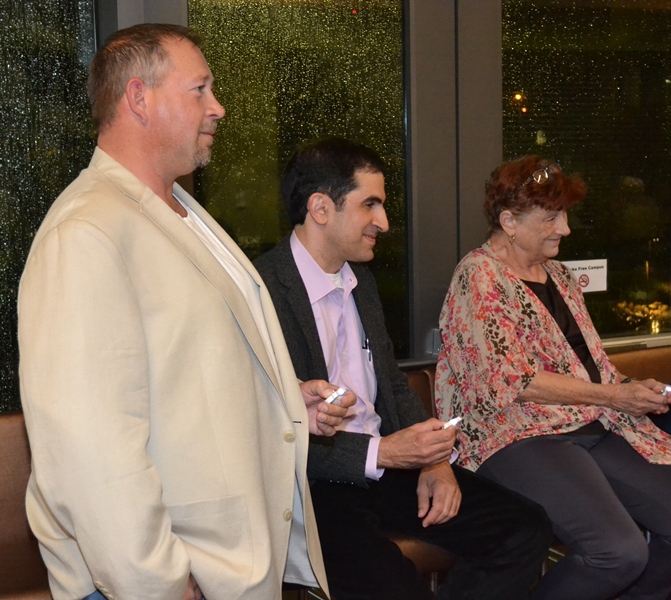 Although he is a strapping ex-Marine, Todd Fahey of Crown Point could be considered a poster child for smoking cessation.

The former 25-year smoker fought the battle of his life after being diagnosed with lung cancer more than two years ago, but these days is cancer-free, thanks to a CT scan that caught his condition in an early stage and subsequent treatment by Eias Jweied, MD, PhD, who, Fahey said, “is the reason I’m alive.”

“It’s very simple – if you’re smoking, quit. A quick way to quit smoking is to find out you have lung cancer,” he told attendees at a recent Franciscan Health Shine a Light on Lung Cancer Vigil.

Four months before learning of his diagnosis, his sister found out she had the disease in stage 4, the worst possible. She died seven months later.

“When you hear you have that, it’s very tough; it was a very trying time in my family,” Fahey said.

He learned of his problem after being checked for a persistent, dry cough.

“I went in for my annual physical and was told everything looked good, even blood work, but the cough didn’t go away.” He ultimately received the CT scan and “hit the surgical table six days later.”

The procedure was done at Franciscan Health Crown Point.

After later being pronounced cancer free, he was given the choice to receive chemotherapy.

“Chemo is a horrible way to lose weight,” he said. “The odds of cancer returning are 50-50 without getting it, and 20 percent if you get it. So the decision was easy.”

He also urges, “if you have the option to get a lung screening, I tell everyone to do it and catch it early on.”

“People need to realize just how important it is to get that scan – it is the number-one cancer-killer. If cancer is caught early on, in stages one or two, we can do surgery and offer the best chance of survival. If we catch it earlier, we can treat it earlier.”

Screenings are encouraged for people aged 55 and older who are current or former smokers or have other risk factors, but are not displaying symptoms. A screening can detect early stages of lung cancer and other lung diseases, and potentially save lives.

Lung cancer is the world’s leading cause of cancer death. If treated early, it has a survival rate of 88 percent.