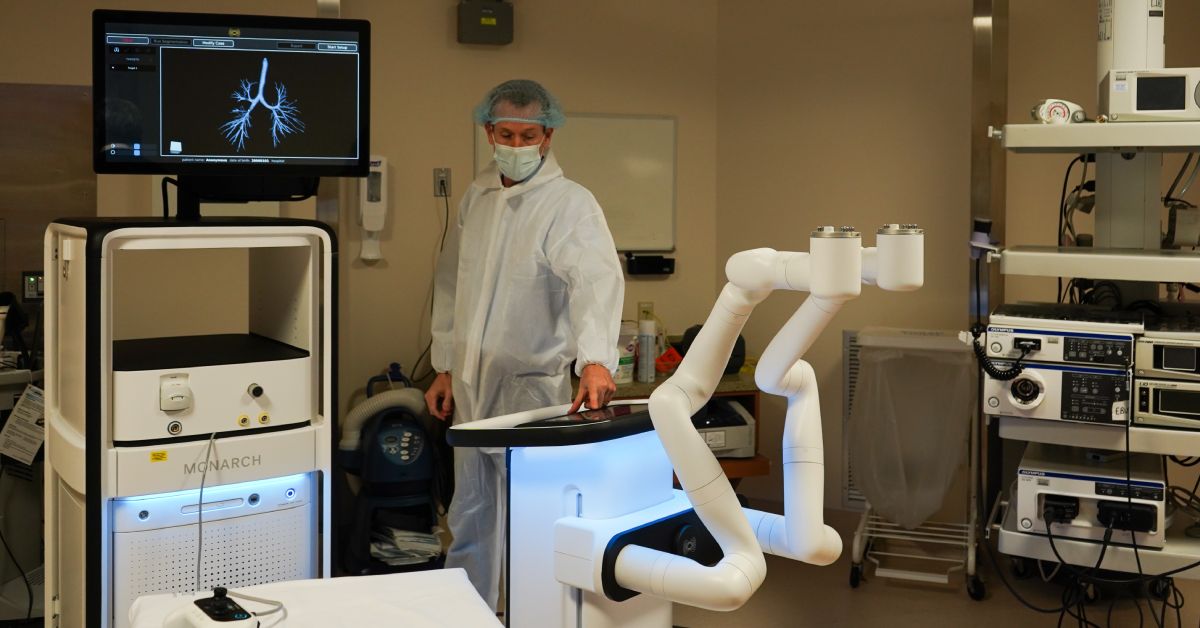 Franciscan Health Cancer Center Munster, in collaboration with RUSH University System for Health, has introduced the Auris MONARCH platform to its arsenal of diagnostic tools in the cancer treatment field.

The Auris MONARCH system is equipped with a camera on the end of the robotic arm, which allows surgeons to see a live view of the procedure. The machine’s improved technology provides a less invasive and more comprehensive approach to diagnosing lung cancer.

“We had previous navigation, but there were limitations in the technology that affected our yield. So the alternative to doing this navigation is to do a needle biopsy, which is invasive. It involves puncturing the chest wall and puncturing the lung and has a higher risk of complication, with lung collapse being one of them,” said Don Dumont, pulmonary physician.

In order to produce a more comprehensive image, a weak electromagnetic field is conducted through the operating table, and a CT scan of the patient is reproduced on a screen. This CT imaging, combined with the images from the camera on the machine, creates a clearer and more accurate visual for the procedure.

Previous methods of bronchoscopy were invasive and risky for patients. The new MONARCH system provides a way to diagnose patients who may not have previously been able to undergo the procedure. With a much less invasive method, Dumont feels he will be able to diagnose more people than ever before.

“We think that's really going to change. With the previous technology, we recognized that there were many instances that we didn’t even attempt to go after because sometimes the patient couldn’t handle undergoing the diagnostic procedure. Now that we have better pathology, I think we'll have much more confidence in going after smaller spots and we’ll have a much higher yield,” Dumont said.

Dumont also hopes to see the system’s capabilities for treatment grow as technology continues to improve. Dumont feels that doctors will one day be able to diagnose and treat lung cancer with the same type of technology. Though it is far into the future, MONARCH’s display of technological advancement is a step in the right direction.

“The best way to treat the primary lung cancer at stage one is to surgically remove it,” said Dumont. “We have a minimally invasive thoracic surgery program, which is also robotic, that addresses that specific need. But some people can't tolerate a major surgery like that, so we're looking at what the options are in terms of getting around that, which now means radiation therapy or chemotherapy.”

Physicians must go through extensive training to operate the MONARCH system. Hours of practice and informational training are required to ensure mastery of the machine. Dumont is looking forward to using the new machine to better the lives of his patients and provide a more accurate diagnosis of abnormalities in the lungs.

“I'm excited about the stability of the platform and the yield we’ll be able to get from it. It will be a massive improvement,” Dumont said.

To learn more about the Auris MONARCH platform, visit https://www.aurishealth.com/monarch-platform