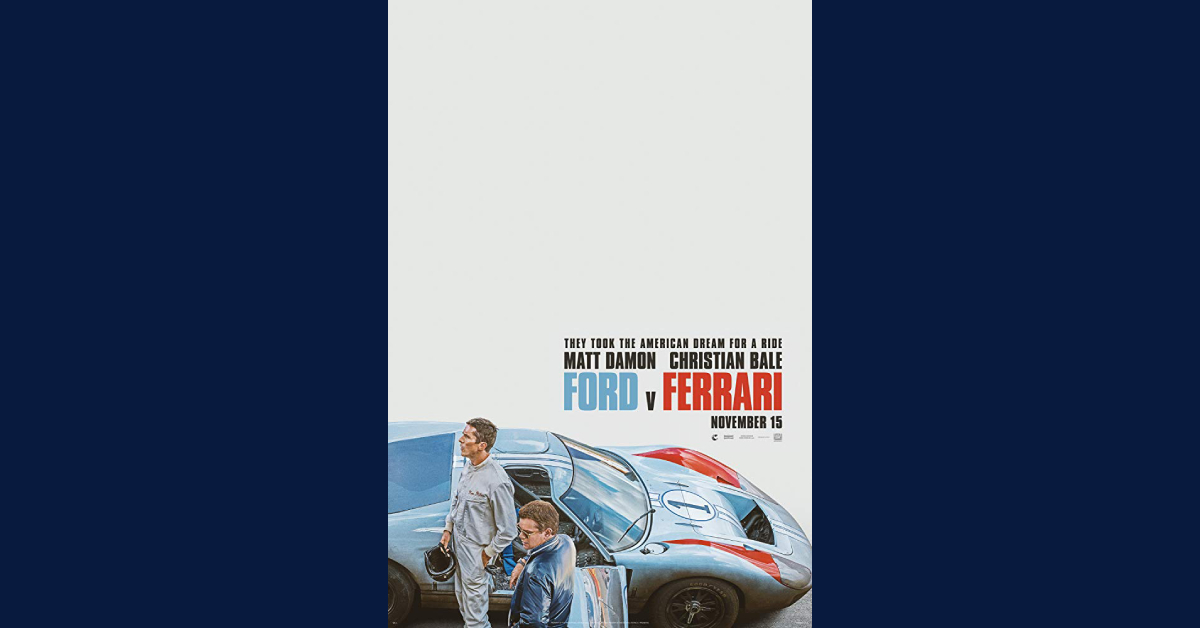 Based on a true story, Ford v Ferrari follows American car designer Carroll Shelby (Matt Damon) and driver Ken Miles (Christian Bale) on their journey with Ford Motor Company as they attempt to make the fastest car in the world. When Lee Iacocca (Jon Bernthal) comes up with a master plan to “think like Ferrari” and go outside the bounds of NASCAR and into a new world of racing, Henry Ford II (Tracy Letts) can’t help but be intrigued. After a meeting between Ford Motor Company and  Enzo Ferrari (Remo Girone) goes awry and Ferrari sells to Fiat, Iacocca goes to Shelby and the war of Ford versus Ferrari begins. Ford creates the revolutionary GT 40 in hopes of defeating Ferrari in the 1966 24-hour Le Mans race, but politics and power always come at a cost.

Ford v Ferrari deserves the Oscar buzz that it is receiving. The best thing about the 1960’s era film is the casting. Matt Damon and Christian Bale never disappoint no matter the role they take. Directed by James Mangold and written by Jez Butterworth, John-Henry Butterworth, and Jason Keller, the audience can’t help but fall in love with our two protagonists. On the other end of the spectrum is the villain of the film, Ford Executive, Leo Beebe (Josh Lucas). It’s been two days since my viewing of the film and thinking about his character still fuels my hatefire. That’s good writing in addition to great acting on Lucas’ part. When it comes to the emotions of the audience and keeping them on their toes, this film goes above and beyond. The technical aspects of the film were also spot on. There were a few racing scenes of iffy CGI, but that could be forgiven because the rest of the film was smooth sailing in cinematography and editing especially. Action-packed, emotional, and just the right movement with unnoticed cuts made for a great viewing experience.

However, there were more than a few downsides to Ford v. Ferrari. One of the main issues of the film is Christian Bale’s accent. Because his character, Ken Miles, is British, Bale had to adjust his accent. The Welsh native's acting may have been solid, but his accent was distracting. In comparison, Matt Damon’s Southern accent felt natural and subtle, which may have added to the jarring quality of Bale’s. Another issue of the film is the set dressing/design and costuming. As a 1960’s period piece, the locations chosen for the film were not adequate in depicting what they should have. The only thing actually dressing the scenes were the correct years of cars, but other than that, nothing made this film feel that it was outside of the present day.

While it’s doubtful that Ford v Ferrari will win an Oscar, it could come down the red carpet with a couple of nominations in acting and maybe even editing or cinematography. A solid 7.5 rating because of the casting, acting, and racing, was held back because of things director James Mangold could have done better. He is known for films like Girl Interrupted (1999) and Walk the Line (2005), so more could be expected of him in terms of the look of this film, but almost all of it can be forgiven because of the performances and a great editor.