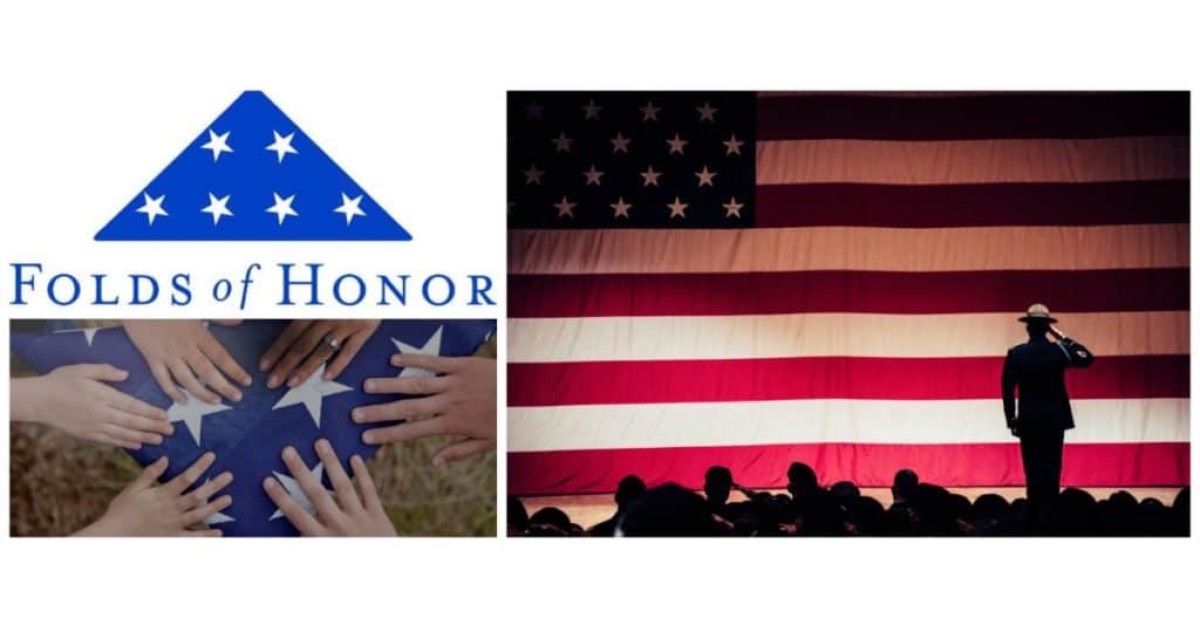 A standard part of any military funeral is the presentation of the folded flag, which had moments before draped the coffin, to the surviving family. It is a fitting symbol, then, for Folds of Honor, a charity that provides college scholarships to Gold Star students, children whose parents were lost or severely wounded while deployed in Iraq or Afghanistan.

“Our most recent award from Folds of Honor is a folded flag that looks a little washed out, but those are all the names of our full scholarships last year—10,000 of them!” Bob Carnagey, Northwest Indiana Director for Folds of Honor Foundation and charity volunteer proudly explained.

Folds of Honor was started from scratch by Air National Guard of Oklahoma F16 Fighter Pilot Dan Rooney. On his way back from his second tour in Iraq, Rooney was aboard a plane carrying a hero home. When he looked out the window, he saw the entourage awaiting that hero, and his life changed.

“Rooney’s story reminded me of some of the people I served with,” Carnagey said, “and I realized that we did very little for those guys when they didn’t come home. Folds of Honor was the right thing to do, and it should’ve been done years ago.”

Every Memorial Day, Currie Motors Ford of Valpo clears the cars from their lot to host the Folds of Honor Car Show and Fundraiser.

“The thing we respect so much about Folds of Honor is that the majority of their proceeds go to benefit gold star families,” said Leo Sfikas, General Manager of Currie Motors Ford of Valpo, “We all appreciate what the charity does. That’s why we go all out every year.”

Currie Motors Ford of Valpo also matches dollar-for-dollar the money raised—from the food sales to the raffles, and entry fees for the car show participants.

Retired Army Warrant Officer David Mckee, who served for 27-years, has been involved with Folds of Hope for the past few. He’d spent the past 11 years as a civilian chaplain, serving soldiers and their families.

Carnagey told of a family he met his first year hosting the golf outing. The family had traveled all the way from Fort Wayne just to attend. They told him their son had been killed in action in Iraq in 2003, and that they were helping to raise his gold star son.

Describing Folds of Honor, Carnagey said, “They thought it out very well. Their heart is in the right place. That’s because they were moved to the soul when they saw a coffin unloaded off an airplane, draped with an American flag, and an 8-year-old standing there saluting.”

“We all want to help military families, we just don’t know how,” Carnagey said.

Folds of Honor is, for many patriots, one such way to support gold star families by helping gold star students go to college.

Currie Motors Ford of Valpo is proud to support Folds of Honor again this year. If you haven’t attended the event, mark your calendar for Memorial Day weekend. Until then, you can help the 4,000 Gold Star Students on the Folds of Hope waiting list by donating at https://www.foldsofhonor.org/.