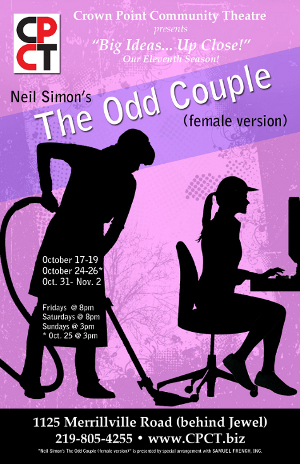 Unger and Madison are at it again, but this time it's Florence Unger and Olive Madison in Neil Simon’s hilarious The Odd Couple (Female Version, coming to the stage weekends October 17-November 2 at Crown Point Community Theatre.

You may remember seeing the iconic movie adaptation of the original Neil Simon play The Odd Couple with Walter Matthau and Jack Lemon or perhaps the 1970's TV show with Jack Klugman and Tony Randall. In this version of The Odd Couple, Simon has revised and updated his popular hit and turned it on its head. Simon's contemporary comic classic becomes even funnier, and perhaps more touching, as he shows us what happens when two friends with decidedly different takes on life are thrown together. Instead of the poker party that begins the original version, Ms. Madison has invited the girls over for an evening of Trivial Pursuit. From there the play takes off when suddenly her friend Florence has to move in, and life becomes very different for Olive.

This gender-switch rewrite, which premiered on Broadway in 1985 (twenty years after the original), provides some different character insights, simply due to the switching of perspectives in the story. “I like writing women very much,” Simon said in a New York Times Magazine interview the same year the female version opened. “Men are more closemouthed about their real feelings, whereas women, if the situation is right, open up.”

Anyone who has ever had a roommate can relate to the conflict that forms the basis of this play. Living with someone - whether best friend or total stranger - will produce stress in even the closest of relationships. The minor tensions and major flare-ups between Olive Madison and Florence Unger run the gamut of what can go wrong when two people share the same space. What started as Olive's sincere effort to help her friend evolves into a major source of conflict, as the two disagree about orderliness, responsibility, personal space and everything else. In order for their friendship to continue, their living arrangement must end - but not before providing Simon's comic version of what happens, in varying degrees, to all roommates.

“Neil Simon didn't simply change the gender of his characters. He's given us a new slant on what friendship really means and how important it really is to all of us,” said director and CPCT board member Aaron Breford. “Even someone who thinks they know the story of this play well will be surprised by how fond we can become of the characters and what they ultimately discover about themselves. This was more than just changing a few lines and switching the poker game to trivial pursuit. As you examine the dynamic sociologically, it also presents an interesting commentary on gender bias and role reversal.” 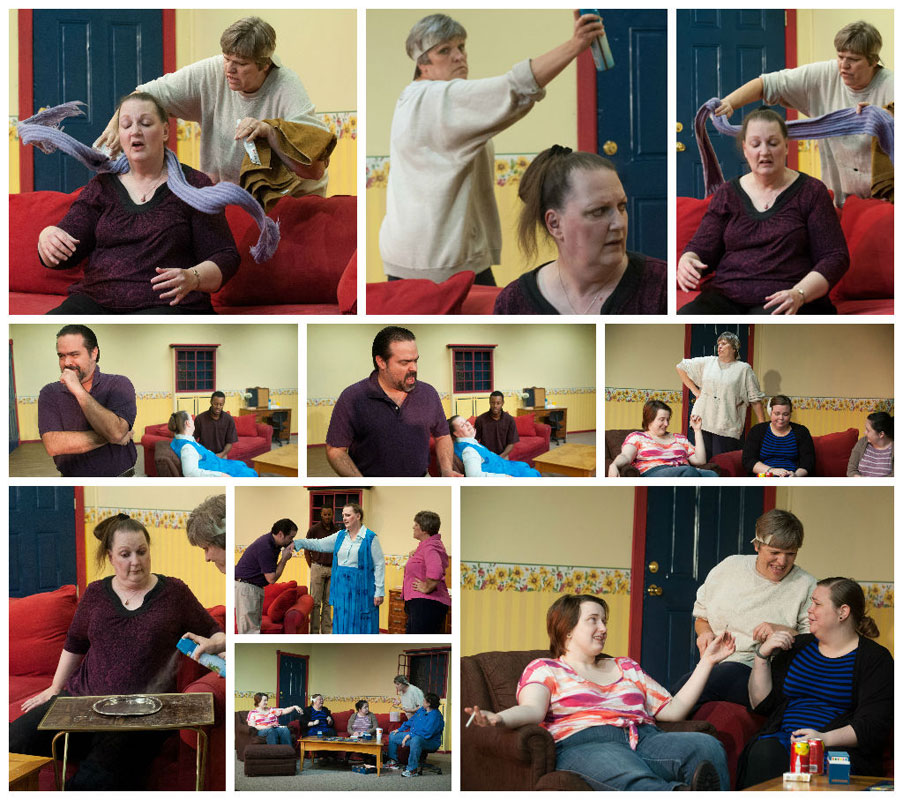 Since Neil Simon set this production in the 1980s, CPCT is also excited to add a special event: On October 31st (Halloween Night) we are having a "Where were you in '82" costume contest as a part of the production. You can come see the play for same low price of $15 dollars for adults and $12 for students and seniors but we will also have an 80's costume contest complete with prizes for the best '80s costume and refreshments. After trick or treating, put on your best '80s garb and treat yourself to a fun night at the theatre!

All CPCT productions take place in CPCT’s black box theatrical space, a 2,500-square-foot storefront located at 1125 Merrillville Road (on the southeast corner of the same shopping plaza as Jewel, Bronco’s Restaurant, and other businesses). Tickets are available online through the CPCT website, CPCT.biz, or by calling (219) 805-4255. Those interested in purchasing tickets at this time may also purchase season tickets; packages start at $60 for our remaining mainstage productions, with additional deals available for family shows and our annual Courthouse Drama at the Old Lake County Courthouse. Compared to regular ticket prices, season tickets save patrons the cost of an entire show over the course of the year. Season tickets are available for purchase by contacting our box office at (219) 805-4255.

About Crown Point Community Theatre (CPCT) – CPCT is a non-profit, 501(c)(3) corporation, based in Crown Point, Indiana, which exists to promote and support community theatre, community programs and the arts for the enrichment and welfare of the citizens of Crown Point, Indiana, the citizens of Lake County, Indiana, and the greater theatrical patronage of the surrounding region, and to further the education of and provide entertainment to its members and the community in the area of theatrical arts. CPCT is a member in good standing of the Northwest Indiana Excellence in Theatre Foundation (NIETF) and the Indiana Community Theatre League (ICTL), and continues to seek ways to reach out to the community.