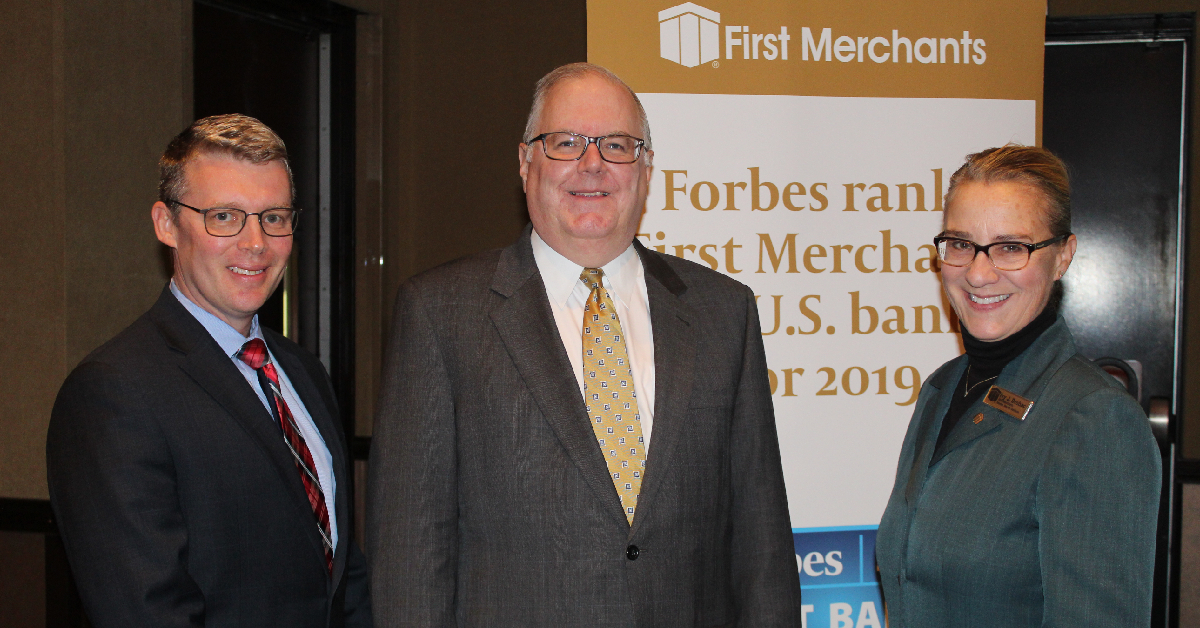 Trying to keep up with the moment-to-moment economic trends in the U.S. is basically a full-time job. The markets ebb and flow with policy changes and current events on all levels, from local to global. First Merchants Bank understands this, so they’ve organized an Annual Economic Outlook Luncheon, which they held again on Thursday.

Hosted at the Center for Visual and Performing Arts in Munster, the luncheon featured Rick Mattoon, Senior Economist and Economic Advisor at the Federal Reserve Bank of Chicago. He summarized the key economic trends of the last year and explained how the Greater Chicago Metro Area’s economy might fare in the years ahead.

“Rick gives everybody kind of a pulse on what the economy is doing, starting at a large level, and breaking it down into the Chicagoland/Northwest Indiana Area,” said Troy Rose, Vice President – Wealth Advisor for First Merchants Bank. “It’s all from his point of view as a senior economist at the Federal Reserve.”

Attendees were treated to a large buffet prior to Mattoon’s presentation.

“It’s a really broad audience,” Rose said. “We’ve got First Merchant Private Wealth and commercial clients, but also interest from centers of influence around the Region. There are CPAs and lawyers attending. It’s a super broad scope.”

Economics is a dense field filled with numbers and regulations, and the outlook is not always the brightest. Yet Mattoon tacked the subject with easy-to-digest information and a lot of levity and humor. At one point he brought out and concisely explained the Federal Reserve’s dot plot, which is essentially a graph that showcases the current mood of the Fed.

“The dot plot is always fascinating to economists, not necessarily to humans,” Mattoon joked. “I’ll demonstrate how good of an economist I am by presenting two points, arguing them both equally compellingly, and not reaching a conclusion.”

Mattoon said that the economy is fairly stable, but also surrounded by uncertainty. He also highlighted that Chicagoland and particularly Indiana are in good positions for future growth.

“Recently, metro Chicago’s been doing quite well,” he said. “2018 was actually kind of a watershed year for the Region, as it’s seeing faster growth than much of the Midwest.”

First Merchants Bank surveys the audience each year, and always receives a positive response. Mattoon himself is a big crowd-pleaser.

“I talked to Mr. Mattoon about inviting him back and he said ‘Well I’ve done it for the last few years, are you sure you don’t want one of my partners?’” Rose said. “I just told him that the feedback’s been so great, they always love your presentation. Overwhelmingly they like his presentation and style, and really want him back.”

The positive feedback solidified one thing for Rose - these types of events are not going anywhere.

“We’re proud of the commitment that First Merchants Bank has in bringing these types of events to the community,” he said. “A lot of people have questions, there’s a lot going on right now geopolitically. This gives us the chance to let those people meet with someone in-the-know who has a really good take on things.”