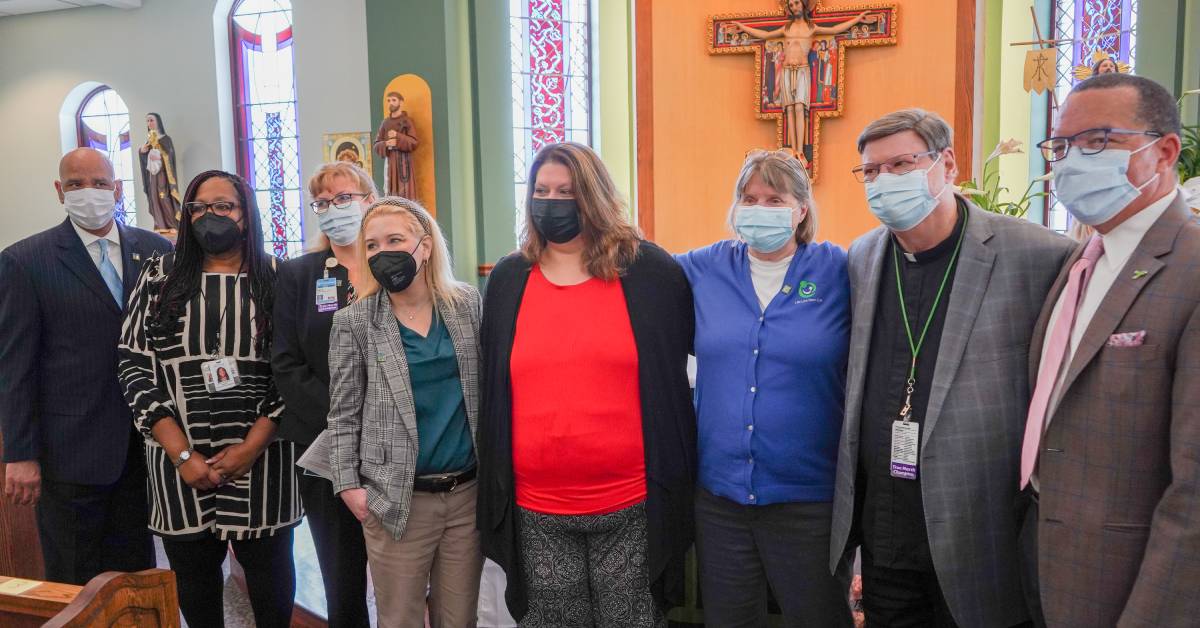 Though most Americans say they support organ donations, only 54% are registered organ donors.

Representatives from organ donation organizations began the event by giving a brief summary of the ways each organization has been able to benefit others from donors. Gift of Hope CEO Dr. Harry Wilkins and Life Line Stem Cell CEO Terri Tibbot each detailed the astounding amount of people impacted by the gift of life from organ donors.

“To me, the biggest miracle of transplantation is that in that time of grief, these courageous families decided to say yes to donation so that someone else could benefit from their loss,” said Wilkins.

Professional Services Coordinator Mike Henderson spoke on behalf of VisionFirst, an organization specializing in eye-tissue transplants. Henderson also spoke about his own experience in receiving donations from living donors.

Henderson’s transplant journey was relatively straightforward, as he had two brothers who were willing to donate one of their kidneys. For many people, however, the process of receiving a transplant can take weeks, months, or years.

After hearing stories of success from organizations that specialize in the process of organ donation, attendees heard from a transplant recipient and a donor’s wife. Each story provided a personal perspective on the effects of organ donation.

Kelly Asbell received a lifesaving lung transplant at 40 years old. After years of celebrating major milestones despite living with cystic fibrosis, Asbell was nearing the end of her life. She had just 48 hours for a miracle to occur, and her time was running out.

Asbell was diagnosed with cystic fibrosis when she was 10 years old. Doctors told her parents to start saving for a funeral instead of starting a college fund.

Her parents had always dreamed of seeing her through major life events like birthday parties, her first love, prom, and sending her to college. Her new diagnosis seemed to halt any dreams of Asbell’s future.

Years later, Asbell did end up needing a college fund. She graduated early and with honors from Valparaiso University and fell in love. Her next goal was to start a family, however, women with cystic fibrosis are constantly told not to get pregnant. When she found out she was having twins, doctors strongly advised her to discontinue the pregnancy.

Asbell ignored their suggestions and began preparing to have children, but not without accepting the likely outcome where her twins would grow up without their mother.

“While most mothers were busy preparing nurseries and doing stuff to prepare to become new parents, I was busy reading Dr. Seuss books on the video to two kids I thought I would never get to meet. My husband knew he would bring home two babies, but bringing home a wife wasn't supposed to be in the cards for us,” said Asbell.

Asbell’s time wasn’t up yet, and 10 years later she turned 40 - a feat only 5% of people with cystic fibrosis have accomplished. She and her husband celebrated by going to Disney. Shortly after returning from the trip, however, Asbell’s lung capacity dropped significantly.

“I thought I was just going into the hospital for what we call a tune-up in the cystic fibrosis world. That's where you get hooked up to IV therapy and antibiotics. But this time I never went home. For the very first time, the word oxygen was introduced. I went from 48% lung capacity and surviving because my body adapted to those lungs to 8%,” said Asbell.

Asbell’s situation was grim, and she was eventually given 48 hours to live. Her only hope of survival was in the form of a transplant. As Asbell neared what seemed to be the end of her life, she received news that she would be receiving a lung transplant.

A few blocks away, a woman named Tracy was at the park with her boyfriend and five-year-old daughter. She had jumped in front of a bullet to save her daughter and boyfriend’s life but had lost her own in the process. Tracy was an organ donor, and her family decided to donate her organs after her death.

“On that day she saved my life, her boyfriend's life, her daughter's life, and 16 other people's lives, and I'm the one that got her lungs,” said Asbell.

Asbell’s lung capacity climbed from 8% to 128% thanks to Tracy’s selflessness, and her decision to be an organ donor meant that many people including Asbell were given a second chance at life.

“Donation isn't about death. It is about life. I am living with Tracy now by my side. I feel her every day from the depths of my stomach and up to my chest and I am amazed,” said Asbell.

“If you can take a deep breath, your life matters, and your God is not done with you yet,” said Asbell. “I continue to share Tracy and I continue to speak about the beautiful brown-eyed beauty who decided to live in the midst of her death. And because of her choice to be a donor. I'm going to share every day the beauty of what it means to get off your deathbed and get a second chance at life.”

Asbell’s story of receiving a lifesaving transplant perfectly illustrated the effects of a transplant on a recipient. Of course, there are always two sides to every story, and during this event, attendees were also privileged to hear a story of hope from a donor’s perspective.

“I want to introduce you to my husband of 18 years, Dan Runyan,” said Donor Wife Heather Runyan as she stepped up to the podium.

Heather Runyan then began to talk about her husband. Dan Runyan was a science teacher at Grimmer Middle School. He was the assistant coach of the football and track team and was head coach of Science Olympiad. He loved his students, his family, and his peers. He also loved running.

Dan Runyan was on the verge of becoming diabetic, and immediately made a change to his lifestyle. He began running, eventually working his way up to competing in half marathons and other events. He was in the best shape of his life at 45 years old and was training to run the Chicago Marathon.

On January 30, 2018, Dan Runyan collapsed while finishing a run with the middle school running club after school. He had suffered from a major cardiac arrest.

Though he fought as hard as he could, on February 2, 2018, Dan Runyan passed away.

Almost immediately after his death, Heather Runyan received a call from Gift of Hope about Dan Runyan’s decision to become an organ donor.

“I couldn't believe that I was receiving a phone call. Just moments ago, I had lost the love of my life,” said Heather Runyan.

The man on the phone explained that they only had 18 hours to begin the organ donation process. Despite the grief that she faced in the sudden loss of her husband, Heather Runyan was firm in the decision to donate her husband’s organs.

“I never wavered. I knew that that was what he wanted to do. I knew that donation was his wish even before we were married. He couldn't imagine being buried with vital and precious gifts that can be shared with others,” said Heather Runyan.

Dan Runyan was able to help 222 people in his death through cornea and tissue donation. Heather Runyan knows that organ donation was exactly what Dan Runyan would have wanted.

“When living, Dan would do whatever he could to help others, to help me, to help our children, his family, his students. In his final act here on earth, he put himself in a selfless act of donation in order that others can thrive if he was no longer able to be alive,” said Heather Runyan.

Though the grieving process was difficult, the Runyan family found comfort in the fact that Dan Runyan was able to help so many people have a second chance at life. Dan Runyan’s legacy lives on in the hundreds of people who were able to continue their lives.

“Some people mourn the loss of their loved one and that's just simply where it ends. You're left continuing to mourn. When donation enters the picture, it gives us hope because our loved one is able to move on with others and we can continue to talk about them. We can continue to remember their legacy, their gift, and their act of selflessness,” said Heather Runyan.

The loss of Dan Runyan was devastating, but his selflessness and desire to help others was able to continue even after his death through the gift of organ donation.

“It's a wonderful feeling to know that he's able to help others through donation. He's still living in a way. He lives on in more than 200 people with the donation of his tissue, his ligaments, and his corneas,” said Heather Runyan.

To learn more about becoming an organ donor, visit https://www.donatelifeindiana.org/about-donation/faqs/