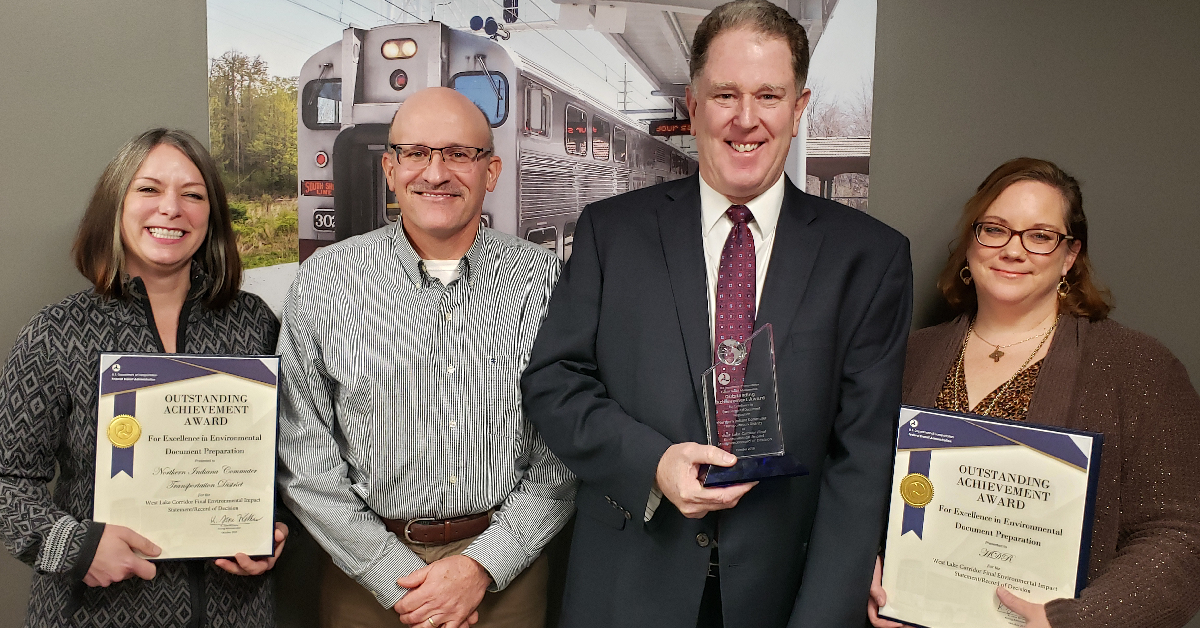 The Federal Transit Administration (FTA) has named the West Lake Corridor project in Northwest Indiana a recipient of the Outstanding Achievement Award for Excellence in Environmental Documentation Preparation. The documents were part of a submission to establish a proposed $933 million project that would increase transportation options for accessing downtown Chicago, improve mobility and accessibility, and stimulate local job creation and economic development opportunities for the growing communities throughout Lake County, Indiana.

“This award represents the substantial, collective efforts of FTA, NICTD, and HDR Engineering to move this project from the Draft Environmental Impact Statement to the Final Environmental Impact Statement and Record of Decision,” said NICTD President and CEO Michael Noland who accepted the award in New York at the American Public Transportation Association conference in October.

“We are extremely proud of the recognition and accomplishments that are signified by this award,” Noland said.

“As a result of the public comment process, we received valuable input on the design of the project from local elected officials, community members and other stakeholders in Hammond, Munster, and Dyer that resulted in a number of significant positive changes, and the documents accurately reflects these changes."

The West Lake Corridor Final Environmental Impact Statement and Record of Decision reflects FTA Region V’s new best-practices review process, fulfilling requirements for content, utility, and practicality in environmental documentation. As the project moves through design and construction, Noland said it is essential that documents convey the environmental consequences, mitigation, and coordination requirements effectively via content that is easily understood by engineers and construction contractors and other stakeholders.

The Outstanding Achievement Award for Excellence in Environmental Document Preparation is presented in two categories every two years — Environmental Assessment and Environmental Impact Statement.
After recently receiving a positive rating from the FTA, the West Lake Corridor Project was approved to enter the engineering phase of the Capital Investment Grant’s New Starts program, a discretionary grant program administered by the FTA.