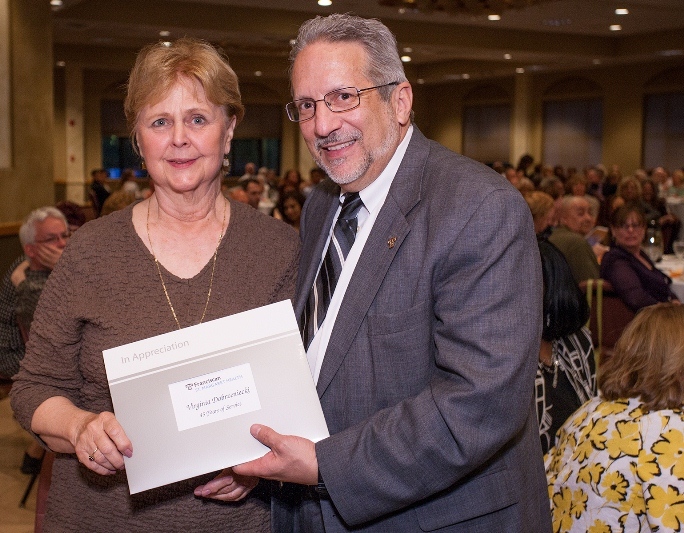 Both recently were honored at an annual employee recognition banquet for those who have served the Dyer and Hammond hospital campuses five years or more.

Dobrzeniecki, of Lowell, was the longest-serving employee congratulated, with 45 years in the hospital system. She currently is a patient access representative in the Central Scheduling Unit at Dyer.

Elkins, of Hobart, is a five-year employee and community relations specialist in the Behavioral Health Center, also at Dyer. He also was the recipient of the 2014 Franciscan St. Margaret Health Timothy P. Galvin Community Service Award, which has been presented since 2005 in honor of Galvin, a former chairman of the hospitals’ board of directors. The award recognizes work ethic and attitudes that exemplify Franciscan values, both in and outside of, the work place.

Both employees said they appreciated and were grateful, yet humbled, by the recognition.

Thomas Gryzbek, hospital president, said of Dobrzeniecki, “Franciscan St. Margaret Health is very grateful for Virginia’s many years of outstanding service. She not only is a very good employee, but a very kind and compassionate person. Her work ethic and concern for patients and coworkers is worthy of highest commendation.”

Katherine Horn, regional director of scheduling, pre-registration and financial counseling and Dobrzeniecki’s supervisor, said her peers only had the highest praise for their coworker, which were reflected in comments Horn solicited.

Horn said of her, “I have been fortunate enough to have worked with Virginia since 2011. During our regionalization and integration of Franciscan Alliance’s four hospitals into one unit, she was instrumental to defining work flow so we could identify ways to improve our efficiency. She was the go-to person when we needed to understand how things operated and is a most valuable part of our team.”

Elkins, besides his contributions to the hospital, was praised for his community volunteer efforts. 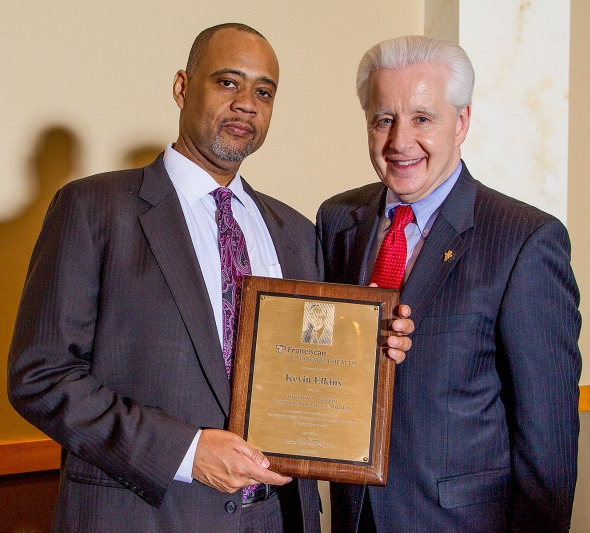 In their nominations of him for the Galvin award, supervisors Linda Thompson, hospital director of behavioral health; and Kim Frank, unit manager; mentioned Elkins’ work with the Episcopal Diocese of Northern Indiana Church Camp; with Camp New Happenings, a faith-based program for children who have incarcerated parents; and the Boys and Girls Club of Cedar Lake in which he serves as a mentor in the SMART Kids program, an after-school offering that creates a safe environment for attendees, as well as academic support and individualized attention from caring adults.

Elkins also works with the club’s Passport to Manhood program, which assists young men with issues and situations they may face as they grow up.

“Kevin exemplifies our mission to Continue Christ’s Ministry in our Franciscan Tradition in amazing and inspiring ways. Kevin motivates us to follow his example in seeing Jesus in disguise in everyone we meet and to treat them with utmost dignity and respect. Kevin not only makes our organization better, but helps motivate us to become better people by following his example.”