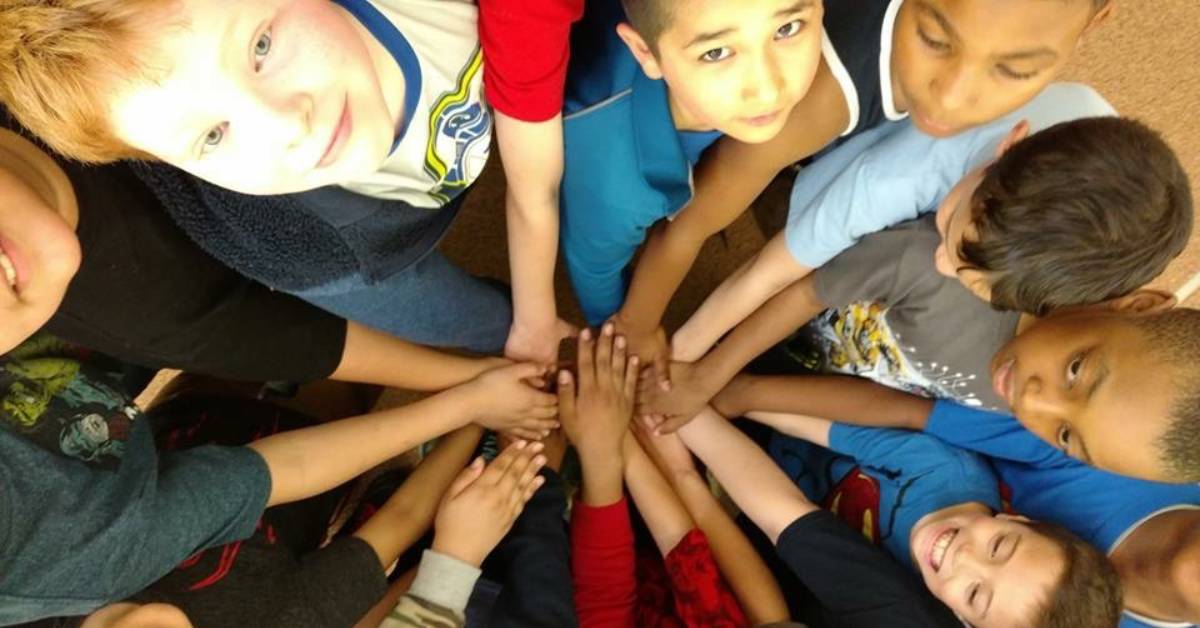 One of the sharpest memories that Barbara Gederian Muckel recalls in her time as Executive Director of Dream Chasers NW Indiana Chapter involves being enveloped in a hug so fierce, it lifted her feet off the ground.

“Thank you so, so much!” said the person giving her the hug, a young boy whose strength in that moment clearly drove from somewhere within. “I just love this team so much!”

His excitement came from the thrill of participating in the Dream Chaser Challenge, the Dream Chasers’ end-of-season obstacle course challenge that allows teams from different sites to come together to challenge one another. The thrill was especially sweet because the boy had just been placed back with family members after four weeks of residing in St. Joseph’s Carmelite Home with his sister, which prevented them from attending several of their Dream Chasers sessions. He was worried they’d be unable to participate in the Challenge because of this, but his coach and Muckel insisted he join the festivity.

“He was just so happy to be a part of something big, to be part of a team that was working together to accomplish goals,” Muckel said.

Dream Chasers is an activity-based character development program designed for all skill and ability levels. Through a team-based atmosphere and fun challenges, it builds confidence in its 3rd-6th grade participants and embeds character development elements into each of its obstacles. Participants learn the importance of reaching for passion, building the right team in life, and developing grit to overcome obstacles in pursuit of their dreams.

The boy Muckel described was just one example of the impact Dream Chasers has on the Region. The program has impacted more than 700 kids in Northwest Indiana. Current sites include Crown Point, Gary, East Chicago, Hammond, Highland, Munster, and LaPorte County.

“Our mission is to empower kids to overcome their obstacles and chase their dreams,” Muckel said. “We live not only by our mission, but by our vision, which is to reach any kid in any setting. Every child has the potential and the opportunity to be something greater, to live each day with purpose and chase their dreams.”

In 2010, Muckel saw her only child, Hunter, off to college and felt that immediate restlessness that most parents feel once their kids leave the nest —what now? A friend recommended that she pursue coaching of some sort so she could work with kids again. Muckel took her advice and started searching for after-school programs to lead.

“The first thing I noticed in my research was that there wasn’t much out there for young boys to get involved in to empower them,” she said. “Being a mom to a boy, that’s something I’ve always felt. We as a society are very centered on empowering girls, and that’s so important, too, but boys need something to develop strong character as well.”

Muckel soon discovered Xcel 2 Fitness, a program that served boys in grades 3-5 and used the fundamentals of athletics to teach them to overcome challenges. She reached out to Xcel 2 Fitness CEO Stephen Vaughn.

“After that first conversation with Stephen, I knew this was a program we needed in Northwest Indiana,” Muckel said.

Vaughn started the program in 2008, in response to his pain shortly after his father lost a battle to cancer. He wanted to channel that pain into something that would inspire boys to overcome the obstacles life places before them, obstacles like strife and fear. Vaughn developed the curriculum initially as a summer program, expanded it into an after-school program into multiple states, and filed for 501(c)(3) nonprofit status. Xcel 2 Fitness was officially declared a nonprofit in 2015.

Muckel was moved by the organization and, though her professional background is in dentistry, she felt called to serve a larger role in it.

“I asked my son, ‘What do you think of that?’ and he said simply, ‘Well, why wouldn’t you?’ Everything was in alignment, and I felt it was God’s way of shaking me out of my little comfort zone. Plus,” she laughed, “when your child essentially challenges you to find a reason not to do it, it’s a pretty good indicator you should do it!”

In 2016, Muckel became executive director of the Xcel 2 Fitness’ Northwest Indiana chapter. As the program continued to develop, it became clear that it needed to have a wider, more diverse reach. In July of 2019, Xcel 2 Fitness underwent a complete rebrand and became Dream Chasers. Inclusion of girls, community participation at big events like Dream Chaser Challenge, an in-school curriculum, and a more inviting, all-inclusive energy were among the changes that came with the rebrand. As a name, Dream Chasers better displays the heart and mission of the organization.

“As a mother, I can acknowledge that my son was afforded lots of opportunities other children were not,” Muckel said. “And that did always weigh on me. With Dream Chasers, any child of any ability, gender, or background can be involved. I have loved being a part of this evolution, and I feel very blessed to be a part of Dream Chasers.”

Dream Chasers is a six-week program composed of 12 sessions. Teams meet twice a week for an hour and fifteen minutes each session. Each session begins with a discussion about having a certain foundation, then leads to an activity that reflects that foundation. For instance, if the focus for the day is on balance in life, the participants might hop on one foot for a length of time or try their hand at agility ladders. Or, if the theme is overcoming fear, they’ll go through a strength course. For teamwork, they’ll work to overcome an obstacle together.

“We use the fundamentals of fitness—strength, speed, agility, cardio, balance—as a way to get these kids moving and learning,” Muckel said. “With the character-building components so tied in, they’re not even realizing they’re learning the fundamentals of leadership and teamwork.”

After a cool down, the session ends with a closing discussion. Coaches follow the curriculum written by Dream Chasers. Each season is a new journey. And, of course, the Dream Chasers Challenge allows different teams to come together for one big obstacle course and to become involved with their surrounding community.

Dream Chasers has developed an in-school curriculum that has already been adopted by several area schools and is developing a summer curriculum.

“Our program is much more than an after-school program,” Muckel said. “We’re promoting character and personal development in children. We combined our after-school and in-school curriculum to create free online resources to provide to any child, anywhere.”

This online resource comes to full fruition at an especially crucial time—during the COVID-19 pandemic that is causing children to rely on e-learning from home and cutting them off from their typical activities, like Dream Chasers courses. The online program offers weeks’ worth of lesson plans for children, with a different plan for each day, including an activity sheet to fill out, a riddle challenge, and a hands-on project to boost creativity.

The Dream Chasers online program offers kids something extra to occupy their time at home, their parents a sigh of relief, and all an additional opportunity for character building during this unprecedented time.

No matter which way it’s utilized, Muckel said the program changes lives—and not just for the children, but also for the adults leading them.

“At the adult level, the Dream Chasers program has been a game-changer, and our coaches are the lifeblood of this program,” she said. “They’re the ones out there leading these kids, listening to them, and guiding them—and learning from them, too.”

In 2019, the executive directors went through a 3-week intensive training course, and Muckel invited her board members and coaches to participate, too.

“We had to really put ourselves out there and share with everyone our dreams and fears, successes and failures. We had to acknowledge that there are obstacles in life and that we allow certain obstacles to get in the way of us achieving our dreams,” she said. “It was inspiring to be vulnerable, and to know that so many others go through the exact same thing.”

Muckel describes herself as a conduit for the organization and encourages everyone to explore the ways it can impact Region youth.