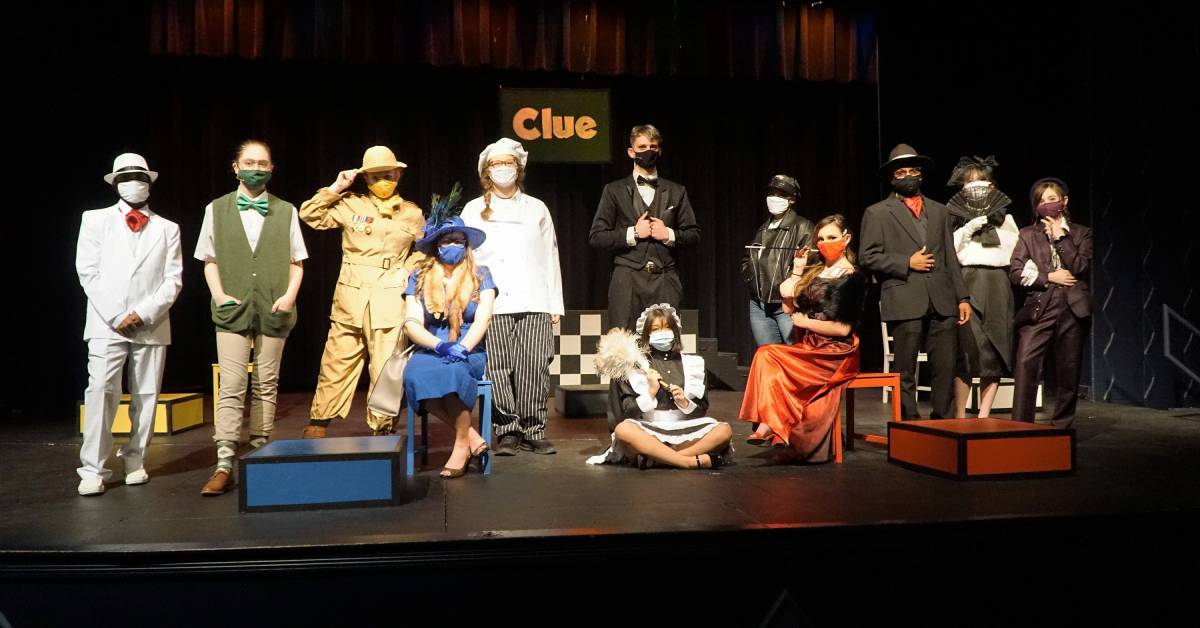 It's a dark and stormy night, and you've been invited to a very unusual dinner party. Each of the guests has an alias, the butler offers a variety of weapons, and the host is, well . . . dead. So whodunnit? Join the iconic oddballs known as Scarlet, Plum, White, Green, Peacock, and Mustard as they race to find the murderer in Boddy Manor before the body count stacks up. Based on the cult classic film and the popular board game, Clue is a madcap comedy that will keep you guessing until the final twist.

Was it Colonel Mustard in the library with a rope? Or perhaps it was Mrs. Peacock in the dining room with a dagger. Then again, Professor Plum has always seemed shady to us. But you’ll have to watch to find out as the drama department of Bishop Noll Institute (BNI) proudly presents their fall play, a unique spin on the classic “whodunnit?” game of Clue! Featuring a well-known cast of sketchy characters.

Set in 1954, in an intimidating mansion, BNI’s drama department invites you to watch along as they work to unravel the mystery of who killed Mr. Boddy. But this is no ordinary play, as you’ll soon see.

“We are doing Clue!, the class murder mystery, but we are doing it in a very unique way this year, due to COVID-19,” said Kayla Konkle, director of the play. “We kind of played around with the idea of the actors being actual pawns, just like on the game board. That way, they can have their own space and be socially distant. So they are playing the game as if they were actually pieces on the board.”

Konkle said that presenting the play during a pandemic presented an entirely unique set of challenges.

“Figuring out how to get twelve kids on stage, and do it safely, was a challenge. Each actor has their own platform, so they never leave that space where they can be mask-free and maintain social distance. When they do leave their platform, they do have masks that match their costumes.”

But those challenges were not the most difficult to overcome. According to Konkle, being patient was the greatest challenge.

“Our musical last year was canceled due to the COVID-19, and we really wanted to make sure that we could do this performance.”

“Rehearsals were either outside or in a big space. Making sure that the audience would be spaced out, taking all the precautions necessary to make sure that we could pull this off, that was the tough part,” said Konkle.

But the cast took their character roles ad ran with them.

Miss Scarlett, played by Adrianna Alvarez, is a woman of mystery.

“Miss Scarlett runs a classified business, for classified affairs in the legislative branch of business and she loves secrets more than anything else in the world,” said Alvarez. “Secrets are her business.”

Mrs Peacock, however, is married to a senator, to whom she is totally and utterly devoted.

“She would do anything for him,” said Abigail Wojtaszek, who plays the character in the play. “Anything.”

“To be able to share art, even during a pandemic, is amazing.”

The play will be presented three nights, November 20 through November 22, with in-person seating limited to close friends and family of the cast and crew, in accordance with CDC guidelines. The play will be live-streamed, with anyone interested int watching invited to do so via the following links:

The cost to watch is just $5 and proceeds go to support the drama club.

Cast includes Matt Feddeler, of Highland, as Wadsworth, Aranza Toral-Arellanoas, of Portage, as Yvette; Adrianna Alvarez, of Hammond, as Miss Scarlett; Abigail Wojtaszek, of Hammond, as Mrs. Peacock; Gwyneth Wragg, of Lansing, as Mrs. White; Reagan Graan, of Crown Point, as Colonel Mustard; Indigo Moore, of Whiting, as Professor Plum; Olivia Baczkowski, of Hobart, as Mr. Green; Jeremiah Johnson, of Gary, as Narrator; Amaurii Fallen, of Hammond, as Mr. Body; Katie Seleb, of Hammond, as Cook and Singing Telegram Girl; Airyal Smith, of Highland, as Motorist and Cop; Sophia Mendez, of Whiting, as Cop and Stage Hand; and Kathryn Zaragoza, of Chicago, as Cop and Stage Hand.

For more information about Bishop Noll Institute, visit them online at https://www.bishopnoll.org/.