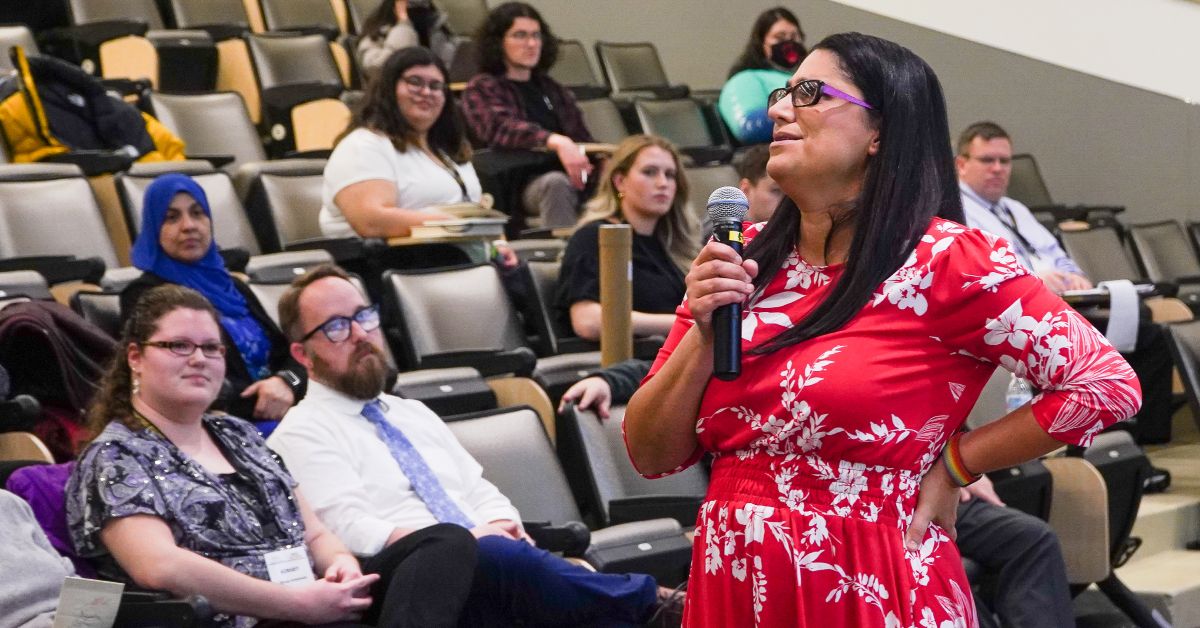 On Thursday, April 7, Purdue University Northwest (PNW) held a program and Q&A session at its Hammond campus with Dr. Mona Hanna-Attisha, author of What the Eyes Don’t See. The book was chosen for the 2021-22 academic year as part of the “One Book, One University” initiative.

“Purdue University Northwest launched ‘One Book, One University’ approximately 15 years ago. The goal is to provide a common read primarily for our incoming freshmen,” said associate professor of Political Science Richard Rupp.

“What the Eyes Don’t See” follows Hanna-Attisha’s journey as she fights to establish uncontaminated water in the city of Flint, Michigan. Though it specifically references the struggles of Flint, Hanna-Attisha emphasizes that the book is about more than a water crisis.

“This book is not just about that one city that had that crazy water crisis, but really about crises and injustices all over that we sometimes fail to see. We all have this amazing power within us to open our eyes and to see these injustices and fight back against the status quo, especially on behalf of a whole population,” said Hanna-Attisha.

“At one point in Michigan, half of our African American population was under emergency management, compared to just 2% of our white population,” said Hanna-Attisha.

When trying to bring her research to light in the political realm, Hanna-Attisha received backlash from all directions. She was called hysterical, accused of making up numbers, and was repeatedly shut down by people in power.

“I felt defeated,” said Hanna-Attisha. “I began to think, ‘Who am I? I am barely five feet tall, I’m a brown first-generation immigrant woman going against the most powerful forces in our state.’ It was hard. It was scary. Everybody was telling me that I was wrong, and for a minute, I was like ‘maybe I should have just kept my eyes closed. Maybe I should have just gone about my business and been the busy academic, the pediatrician, the mom, the wife.’”

Despite her doubts, Hanna-Attisha knew her “why” was bigger than her “how.” She felt her passion for eliminating contaminated water was worth whatever obstacles came with the territory.

“That's one lesson that I love to take away from the story is to find your ‘why.’ And for me that was the kids. That's why I went to school forever. That's why I wrote a book. That's why I'm here with you today. That's why I do what I do,” Hanna-Attisha said.

She encouraged the audience to find their “why” in whatever they were passionate about.

Student Brooke Manhatton felt especially motivated by Hanna-Attisha’s push to find a passion. During the Q&A section of the lecture, she asked for insight on a situation she had encountered at East Chicago Central High School.

Manhatton is a student-teacher at E.C. Central. On her first day of teaching, she noticed water fountains, sinks, and even some bathroom faucets covered in plastic bags. When she asked for the reason, she was told there was lead in the school’s pipes.

The school’s solution was to provide reusable water bottles to the students. Manhatton pointed out that, while this certainly helped, many students would lose the bottles, and emphasized that water bottles should never be the answer for such a catastrophic problem.

She also asked questions about how she could advocate for the students that don’t realize they need help. Manhatton explained that the students feel they deserve the lack of safe water, and that they view the health concern as something that is meant to affect them.

“They, as students, are like ‘of course this happens to us’ and there’s nothing that they can do. What can we do as people that have not only read your book, but care, do to help these kids? I’m young and I care, so I have the energy to go do these things. What can we do in East Chicago?” Manhatton asked.

Hanna-Attisha, as well as the rest of the audience, was touched by Manhatton’s passion. She urged Manhatton and others to continue to fight, and to know the power they held.

“I want you to know how much power you have. If you look around the world, the movements that are happening to change the world are being led by you and your generation. It’s you guys who are sick of the status quo, sick of older people who haven’t done anything about it, and demanding change. Keep doing what you’re doing, and keep raising awareness,” said Hanna-Attisha.

The Q&A session brought up conversations about Hanna-Attisha’s experience as a woman of color in STEM, as well as questions about writing the book and finding balance.

The messages embedded in Hanna-Attisha’s story were incredibly profound to the audience full of young people. Her resilience, passion, and perseverance proved to be an inspiration to those in attendance.

For more information about PNW’s “One Book, One University” program, visit pnw.edu/one-book.